Once upon a time, there was a beautiful Princess who was alone, cursed by an evil witch. The witches curse dictated that the Princess’ true love will vanish, and never be seen again! Trapped inside the body of a frog, the Prince awaited a kiss of his true love. This kiss will set him free and unite the couple. After the kiss, The Prince will marry and live happily ever after. He waits and hopes she will find his four-legged amphibian body and place true love’s first kiss upon his green lips. Help the Princess find the frog Prince by defeating the evil witch’s 5-reel in one of the best online slots! Spin the wheel to launch the frog prince from the lily pad. Filled with 25 pay lines and exciting bonus Wilds, the Enchanted Prince offers its players the chance to win a happy ever after.

Eyecon has two decades of the best slot games creation behind them. They have been delivering premium online slot games since the end of last century. They are a company who were founded in the beautiful city of Brisbane, Australia in 1997. However, they have since moved their head office to the even more beautiful Island of Alderney, Guernsey in 2013! They have released some of the most unique story-driven online casino slot games. They also have released many online bingo games too!

Their first online casino slot game was Temple of Isis (now temple of Iris), released in 2003. This innovative title was so impressive it is still extremely popular to this day! Most of their online casino games share one component: stunning cartoon visual art.

Enchanted Prince is a classic fairy-tale theme slot game with a Jackpot of 2400 coins! Eyecon’s Enchanted Prince is a 5 reel, 25 pay line online slot that has up hopping for joy! The betting amounts range from £0.25 to £12.50 per spin. We thoroughly have enjoyed playing this unique game, and would recommend you join in with the fun!

Whenever we won a round of Eyecon’s, Enchanted Prince, we too were inclined to kiss that cutie-pie Prince frog! The symbols within this game are all mesmerising choices. Of course, you have your 10, J, Q, K and Ace. The higher symbols offer a more magical selection. The Ruby Heart of the Princess, the Frog Prince’s favourite waterlily, the couple’s Castle, and the gorgeous young Princess. The Princess is the highest value symbol in the game. Finding 5 of the Princess symbols will trigger the jackpot, while 5 of the Castle is also a high-value symbol, with an 1800-coin reward for 5. Play this and more great games, by visiting EasySlots, here.

There is also a Crown Wild symbol, which can substitute for any other symbol on the reels, other than the Scatter. The Scatter card is the extremely charming Frog Prince! 3 Frog symbols will trigger 15 Free Spins, with an extra 5 Free Spins per additional Scatter landed. This Bonus Feature can be re-triggered multiple times. A double Wild regularly lands, too. If it does, you win an equivalent of 5, 10, or 50 times your stake. Depending on how many Free Spins we have, the wins can quickly add up during this round.

Click here to learn more about mobile billing slots on this site.

The graphics and audio in Enchanted Princess are the most impressive features of the game. The visuals are full of bright colourful cartoon illustrations. This artwork is very similar to that of an old Disney film, or even a penguin children's book. The characters in this game are beautiful and fair. They are dressed in authentic middle-age British clothing items. Additionally, the soundtrack of the game is exquisite! After listening to the traditional British, middle-age musical compositions, we felt like we were in a real fairy-tale!

In fact, this game is not the first recently adaptation of this famous fairy-tale. Disney's blockbuster release The Princess and the Frog also portrayed this age-old narrative. This film was applauded for being the first Disney film to present a princess of African-America origin. The story followed the life of Tiana, a young girl from New Orleans. She is required to save a Prince, who has been cursed by an evil doctor, who turned the Prince into a frog! We feel that Eyecon's, Enchanted Prince, does a better job of presenting this story than Disney's successful film. Shocking, right? Nevertheless, the film is an excellent way to get excited for this fantastic release from Eyecon! 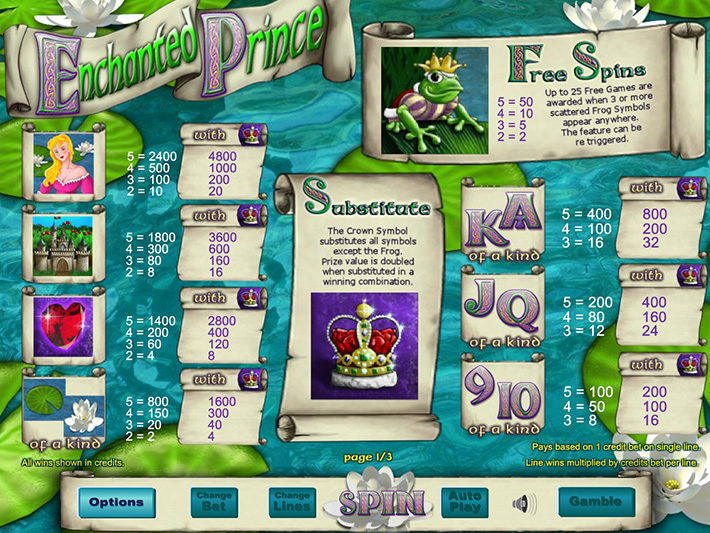 Eyecon’s fairy-tale, Enchanted Prince, is a magical gaming experience like no other. It will take you through an iconic romantic narrative as no other online casino slot game has before. In terms of winnings, the gameplay is as fruitful as a poison red apple - it is so fun and exciting it is dangerous! The sweet, nostalgic music was hypnotising, making us fall in love with the unique and refreshing take of a casino slot game. No frogs were harmed in the creation of this game. Check out our popular slot games here: EasySlots.com.