As children we were all unnerved by the ominous and spooky nature of Hansel and Gretel, the idea of children being stolen by a wicked witch was very sinister. However, the good news is Hansel and his sister Gretel are now all grown up and ready to take on the wicked witch as fully grown tax-paying citizens. Spin the top online slots reels on this ghostly and spooky witch hunt and play through 70 paylines of crossbows and free spins.

This game was designed and developed by iSoftBet, an online and mobile casino games supplier, providing fun and profits to some of the world’s largest and most-successful e-gaming casinos. They are famous for always being always aware of what their clients are looking for. Being certified in vast areas, including Spain, Italy, Portugal, Belgium and the UK, they are a highly skilled bunch of individuals that always match strict protocols and challenges. Games like Hansel & Gretel are part of a series that represented a first for this company. This game was their first movie-themed 5 star slot games online, and proved to be a real success among casino players. 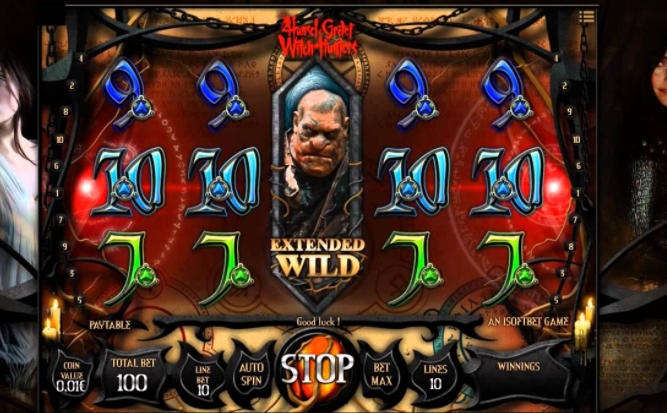 Unleash the kid inside you with this scary, yet beautiful fairy-tale-themed online slots game from iSoftBet. Published in 1812 by the German Grimm Brothers, this world-famous fairy tale has reached billions of children and inspired lots of other representations that lead up to our present days, such as the horror movie that was shot, 200 years later, in 2012, called exactly as this amazing slots game that has it as a main inspiration, developed by iSoftBet.

This 5 reels, 10 pay-lines slots game is designed with gothic graphics delivers a bloodthirsty, dark, oppressive atmosphere. On the reels you can find some stylized playing cards, alongside other symbols such as the main characters from the film, including Gemma Arterton.

This game comes with amazing bonuses as well. For example, keep your eyes out and do not lose the breadcrumbs path finding the Monster, that represents the Wild and expands when found in the center of the reel(s). You also get a Free Spins feature as the wilds expand and freeze during this feature – there are 15 free spins at stake, for you to grab. Fancy this game? Try it in its pay by phone slots version!

Follow Gretel, as finding Gemma Arterton gives you 3,000 coins if you land on 5 of her symbols.

The wild substitutes every singe symbol but the scatter, which, in this game is represented by the crossbow. Get yourself lucky enough to land on at least 3 of these symbols and you can win up to 1,000 coins, as well as triggering the Free Spins feature. 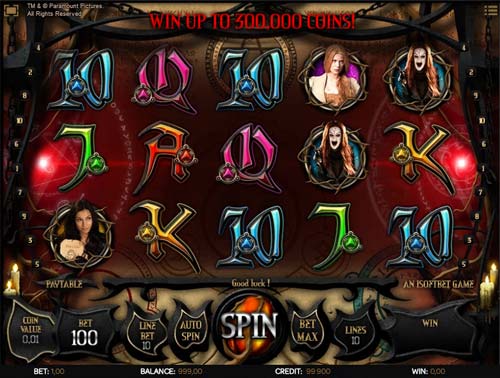 Although the film did not prove to be that big of a success, nor did it reach the box office, this slots game compensates and has received lots of praising from professionals of casinos. The one and only flaw of this one, is only visible for the real fans of fairy-tales as if you pay close attention, you’ll notice that Hansel is missing from the reels. But rumors say that, if you hit the jackpot with Gretel, Hansel will show up to congratulate you personally!

This rather spooky, horror game, inspired by the German fairy-tale, proves to be the right thing if you are in a dark mood for winning stealthily whooping prizes. Either way, if you are or not a fan of fairy tales, it is still a good, easy-to-play slots game, that gets you engaged in a blood bathing  atmosphere from where you have to win your way out, and eventually, if you  escape, you may just have enough to produce & direct a new movie yourself, only with Hansel & Gretel online slots game from iSoftBet.