How close can you get to recreating a Disney classic without breaking certain copyright laws? Quite close apparently if you look at 3 Genie Wishes: a slot from developers Pragmatic Play, a developer who happen to be experts in this field. Pretty much all of the visuals in this slot are a reflection of the Disney movie that came out so many years ago. Even the genie seems to be a direct reference to the Robin Williams voiced character. This is no doubt this is one of the best slots game for players who feel a sense of nostalgia when it comes to seeing these types of stories and immediately thinking Disney. Expect flying carpets, lamps that grant wishes, a temple of untold secrets, as well as a variety of outside emotions. Wish to learn more?

Still interested? Of course, you are! 3 Genie Wishes is one of the few slots where the Genie can help you to win the prize unimaginable to normal person! This 5-reel, 50 pay-line slot game can be played on mobile and desktop devices from as little as 50p per spin or as much as 250.00 per spin.

The Genie is a fan of chance and so should you, as each spin becomes just that little more exciting with the eye-water rewards on offer.  This game is considered to be as rare as the Genie himself, as the game winlines extremely hard to replicate on the market, particularly one with so many symbols and several features in tow.

The theme of 3 Genie Wishes is strong based on the concept of Aladdin. This is made obvious with the amber sky, Arabian backdrop littered with palm trees. The additional fun features such as Stacked Wilds, a Bonus Feature, Free Spins, and Sticky Wilds to help you win some huge prizes!

Pragmatic Play is a software development company, which focuses specifically on the best online casino slot games. Developing high-quality and entertaining slot game for mobile and desktop devices is the company’s passion. This is made obvious by the gaming content in which they produce that is both unique and hugely popular, boasting a library of over 80 slot games which are highly innovative.

Pragmatic Play Originated in 2015 and has since earnt the title of one of the fastest-growing provider of slot games. The Pragmatic Play team is made up from 100+ team of igaming experts, which is a large factor to why the company has made such quick progression within the market.

The Siliema based headquarters within the island of Malta is the new home of innovative slot game themes. Pragmatic Play team have built a steady reputation as one of the best-known developers across the world by combing exciting gameplay with a variety of themes. The growing competition within the market has only inspired Pragmatic Play further resulting in their rightful place as an award-winning game studio.

2017 saw Pragmatic Play battle hard to receive the title of Software Rising Star category at the EGR B2B Awards. What’s more, they took the Malta iGaming Excellence Awards to the cleaner after winning the Best Digital Company of the Year, Best Gamified Experience Company and Best HR Director of the Year.

What’s more, the company just missed out at the EGR Operator Awards. In consecutive years, 2016 and 2017, shortlisted for Game of the Year, for Hot Safari and Queen of Gold respectively, but ultimately fell short of securing the high-status prize. Never the less, these nominations emphasise that Pragmatic Play offers some of the best games available.

How pragmatic does one need to be to have a name like Pragmatic Play. It’s probably not a good idea to dwell on this as there are slots to play! These guys know what to do to create the best possible slot experiences out there, and they show no signs of slowing down. Pragmatic Play is yet another developer that is adored by both their peers as well as their audience. Pragmatic: a company with roots that go deeper than what meets the eye. These guys are an established name in the industry, responsible for countless recognisable titles.

Fancy this game? Play on Easy deposit by mobile casino!

3 Genie Wishes is 4x5 video slot that has all the inner working to become an instant success story. To begin this slot all you need to do is simply select the amount of money you are willing to bet and go from there. Every symbol in this slot is represented by a different numerical value, some symbols score higher than others which should take priority over other symbols. The genie symbol is the highest paying symbol on this board. This symbol is also the wild symbol and will substitute other symbols on the reels for scatters which can open the chamber to even higher scores. 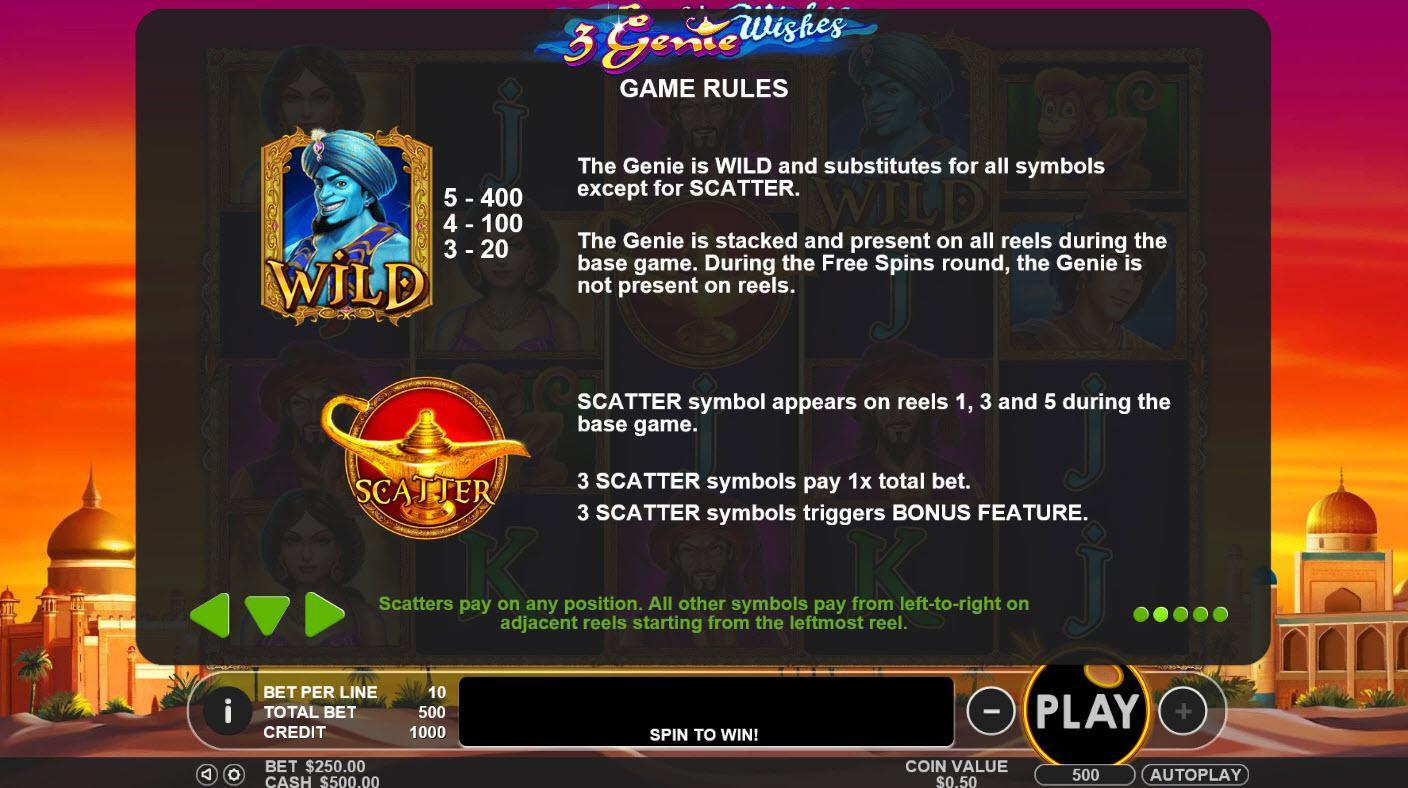 The Verdict of 3 Genie Wishes

The story of Aladdin is a relatively known one thanks mostly due to the aforementioned Disney iteration. If you are someone who doesn’t know the story of Aladdin, then what better crash course than to play 3 Genie Wishes? The word loot in the title is very apropos in a sense, as there is quite a lot of look available here that is ripe for the picking but be warned. Knowing when and where to cash out will be the difference between being a Jafar and an Aladdin. Play this slot today! If you enjoyed 3 Genie Wishes why not try 7 Monkeys