Take a trip into outer space and discover a selection of precious stones and jewels in Starburst slot, our most popular 5 reel classic slot game. This is one of the best online slots that allow you to match rare gems and lines to win endless free spins and cash rewards.

Play Starburst today, thanks to NetEnt, which has developed the most fascinating slot game in the UK. Action takes place against a 5x3 reel set up, with a fixed number of 10 paylines. There are sticky wilds apparent here, which can reward up to 50,000 coins (£50,000)! Re-spins and pay both ways are the only features in Starburst free slot, which are more than enough to keep players entertained.

Starburst RTP stands at 96.09% and the volatility of the game is low, meaning that you can expect some regular Starburst wins of small size. Play Starburst with your mobile, or on desktop, at Easy Slots site and enjoy an up to £1,000 welcome bonus and Starburst no deposit bonuses as you keep coming back on the site (Full Ts & Cs Apply)!

If you’re used to the more complex and pay line heavy online slots, then you may be wondering where all the additional symbols and opportunities to win on Starburst are hiding. In respect of this, fewer symbols on fewer pay-lines translate to a more condensed gameplay, in other words, you have more chance of matching winning combinations and gaining those cash rewards and prizes. This allows the players of Starburst to strive for huge jackpots and perhaps it is this that gives Starburst a subtle edge.

The above average RTP of Starburst, calculated by NetEnt at 96.09%, is another huge pro of this slot machine over other more recent slot games. The above statements also support the reported volatility of Starburst as low; meaning that wins might not be huge, but they come indeed quite regularly. When it comes to the game’s hit rate, there are conflicting rewards on the web; still we did our best to source you with the most authoritative details in the below table.

Starburst is perhaps one of the most played games on the uk market now, mostly because it is usually the slots game that is included in most welcome packages. However, it would be unfair to say this is the only reason for its popularity. Starburst slot contains the usual 5 reels, with a simplistic 10 pay lines for you to spin your way through – which can be done as follows:

Although simplistic, Starburst would not be the slot it is without the intriguing bonus features that can be accessed by the brave amongst you.

The Starburst symbol is the Wild symbol; this is the one you need to be looking out for, as per usual it can be substituted for any other symbols on the reels, and in finding the Wild it will enable you to notch up some larger and more rewarding spin combinations.

Starburst free spins are also triggered for every wild symbol landing on the reels, with 3 of them positioned on reel 2, 3, and 4 alongside some 7s – leading up to the highest possible win in the game (£50,000).

This feature would be barely enough if Starburst was not a pay both ways slot machine. This means that combinations are formed from left to right and right to left. Thus, when you land a sticky wild on the Starburst reels, the free spins that follow are very lucrative due to this innovative mechanic.

Further, with Easy Slots pay by mobile slots feature, you could also claim way more free spins, as you can access Starburst with up to £1,000 free when you conduct your first deposit (Full Ts & Cs Apply). 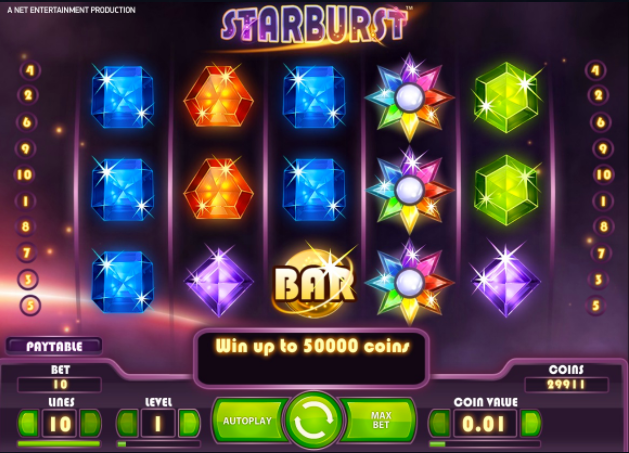 This exciting free play slot game does not have a particular theme or topic that surrounds it with an aesthetic that offers itself as more of a flashy, neon visual spectacle that is coupled with revolving jewels and stars. The closest theme that Starburst perhaps draws on is that of outer-space. NetEnt have really kept it simple with this online slot and this is perhaps the reason behind its popularity.

For a 2012 release, Starburst looks spectacular. The graphics are 3D, and the symbols look like actual gems. The sound effects are quite peaceful too, perfectly aligning with the low variance that the slot game carries.

Like we mentioned earlier Starburst is extremely simplistic, however, this should not be looked upon negatively. What it lacks in complexity it certainly makes up for in quality and this is clear when you analyse the detail that goes into producing the game board and all the symbols that are placed on it.

Spin through blue, purple, orange, green, and yellow symbols as well as the ever-familiar classic bar symbol that you may remember from fruit machines of yesteryear. In addition, you can enjoy the wonderful Starburst sound effects that this game has on offer, however, if you prefer to play in silence or with some other soundtrack then there is a toggle on/off feature available to you. 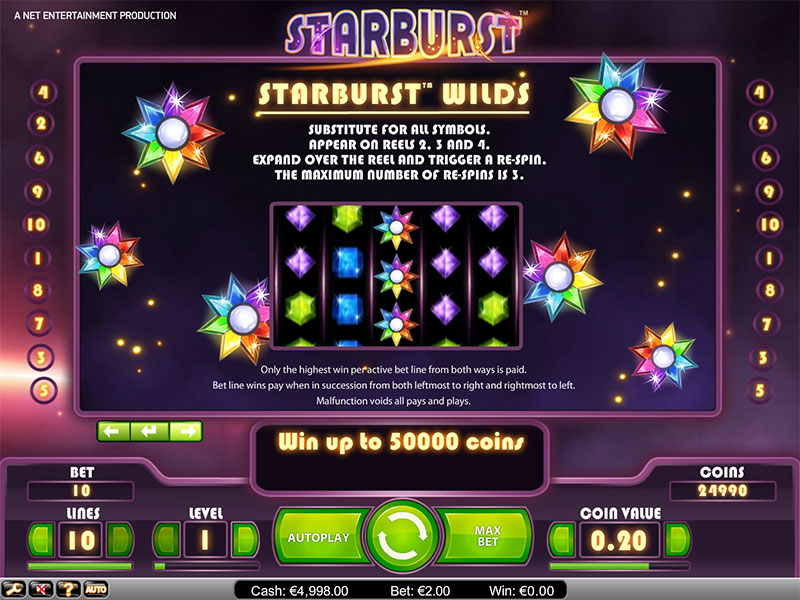 About NetEnt: The Starburst Slot Developers

Net Entertainment is perhaps the leading developer of first-class online slot games on the market. After their foundation over 20 years ago, they have become pioneers of the online slot gaming market bringing games such as Starburst, Gonzo’s Quest, and Warlords Crystals of Power.

NetEnt is at the top of their game at this present moment and has not shown any signs of slowing down as they continue to release top-quality games that keep on gaining the satisfaction of their players. They remain one of the favoured developers that create only the best slot games that are available at Easy slots.

Besides Starburst mobile slot, they specialize in games that carry the following traits:

If you are looking to gain some familiarity with Starburst before you place some serious bets, then do not hesitate to have a few spins on the demo Starburst mode (free play). You will be able to learn the skills and logic of Starburst slots before you bet real money. Starburst hosts a versatile and inclusive structure allowing gamers to place bets for as low as one penny or as high as £100 per line.

Still, free bets are a great way to test the payouts, RTP, hit rate, and Starburst volatility before using your own money. Our Starburst welcome free bonus is also useful to the same end (Full Ts & Cs Apply).

NetEnt has done a great job when they developed Starburst slot game; it was clear that they saw a gap in the market for a high-quality, yet simplistic 5 reel online slot game that does exactly what it says on the tin.

Starburst is a game for both experienced and relatively new gamers on the market, offering a perfect entry point to cut your teeth in the online gaming world. Easy Slots rates this game extremely high (9/10). If you enjoyed Starburst free slots, you might also like Aloha online slots game from the same provider.