Here's another excellent game for you. The Fluffy Favourites series has taken the online slots market by storm, widely regarded as the best online casino sequence out there, Fluffy Favourites Fairground is potentially the pick of the bunch for many slot games online to play.

The developers at Eyecon have hit the jackpot with the original slot game and decided to develop the name further, which bring us to the Fluffy Favourites Fairground version. Like the original the game, this is a 25 pay-line by a five-reel top slots uk with all your favourite cute and cuddly animal friends as reel symbols, these include the cutes tortoise and panda that we’ve become accustomed to seeing so often and falling in love with them.

If you are a regular player of the Fairgrounds Fairground series, you will have a good understanding of the sheer cuteness on offer. As one of the cutest slots on the market, Fluffy Favourites popularity is a result of the eye-watering progressive jackpot and classic slot fun. Do you remember the original Fluffy Favourites? The classic 25 pay-line formats are mirrored within the new and improved five-reel slot with a host of cuddly fairground-themed symbols such as a giraffe, an irresistible panda and a tortoise.

On one hand, Easy Slots recommends this slot to any first-time players because of the games simplistic nature and low stake feature. On the other hand, Previous experience and budget have little impact on the guaranteed enjoyment which you will have whilst playing this game, making this game appropriate for everyone. Don't miss the chance to play the slot games here at Easy!

Eyecon was established in Brisbane back in 1997, starting up as a traditional gaming company before expanding and acknowledging a gap in the online free casino market. From there they made a smooth transition into the iGaming industry with a team of keen and creative individuals who wanted to make an impact on the online slots market and they’ve done just that.

Building up an impressive portfolio with over 70 stand-out games including the Fluffy Favourites Fairground Jackpot that hit it off punters immediately upon release, demonstrating the imagination and unique filling that goes into their games. Some of Eyecon’s other most noticeable games are the likes of Enchanted Prince slots, Happy Birthday and Sugar Train.

All of whom sit in the top half of the table for the most played online slots games around. More recently in 2017, Eyecon formed a partnership with gaming sensations Playtech, through this they have been able to develop even further and work closely on how to keep fulfilling slots players wishes, which they’re doing a pretty good job! Why not try this 5 star game with our paybymobile deposit option?

Founded in Brisbane in 1997, Eyecon originally started as a gaming company before realising their hearts were in the online casino market.  The transition proved to be the right decision as they rapidly built up a portfolio of over 70 popular games catering for all tastes, including Sugar Train, Enchanted Prince Slots and Happy Birthday slots.

The land-based gaming sector is traditionally the company’s stronghold but as the online gaming market has developed Eyecon has released a large number of iconic games, which have established their place as one of the market leaders. Eyecon released their first successful game ‘Gore’ within their second year of operation.

Gore received huge successes in a time when the internet was a fairly new concept for many people across the world. The company developed it’s first online slot game Temple of Iris. The game is now considered to be a classic and is still hugely popular today.

The company's steady ambition to be classified as one of the best gaming developers is achieved without necessarily being at the forefront of innovation. Eyecon prides itself on the fact that all games are fundamentally focused on simplified standard, universally accepted rules and features.

Arguably Eyecon biggest success within the igaming industry comes in the form of ‘Fluffy Favourites’, first released in 2006. Still, to this day Fluffy Favourites is as popular as ever! The simplistic style of gameplay is preferred to by many fans of classic online slots games.

Consequently, fluffy favourites fairground is not going to set the world alight in terms of fancy gameplay but will allow you to sit back and enjoy the simplistic aspect of the game. And if you want to have a look at some other Fluffy Favourites games, why not have a quick look at the list below:

A simply stunning slots game from an aesthetic point of view as well as a gameplay perspective. Our little fluffy friends spark a wonderful mix of contrasting colours which light up and breaths happiness and joy into the game.

This cash full game is spread out across the various animal symbols such as the giraffe and panda, be sure to keep an eye out for the adorable miniature hippos as this will result in a cash prize of x200 of your original stake.

Wilds – The wilds symbol is disguised as the cute little pink elephant; this symbol will substitute all symbols apart from the claw.

Free Games Feature – If you discover 3,4 or 5 pink elephant wilds on your same spin, the free games feature will be activated. Granting you either 15, 20 or 25 free spins. Any cash gained from these spins will be multiplied by 3, the feature can also be re-triggered up to 15 times meaning there is the possibility of 400 free spins.

Toybox Pick Feature – To trigger this feature you must land three 3+ claws on the same spin. You will then be transferred to a new screen whereby you will use a classic fairground grabber to have a go at hooking a cuddly toy if successful pick can generate you up to 100 times your original stake amount. Why not also check out Wizard Slots since you are here? 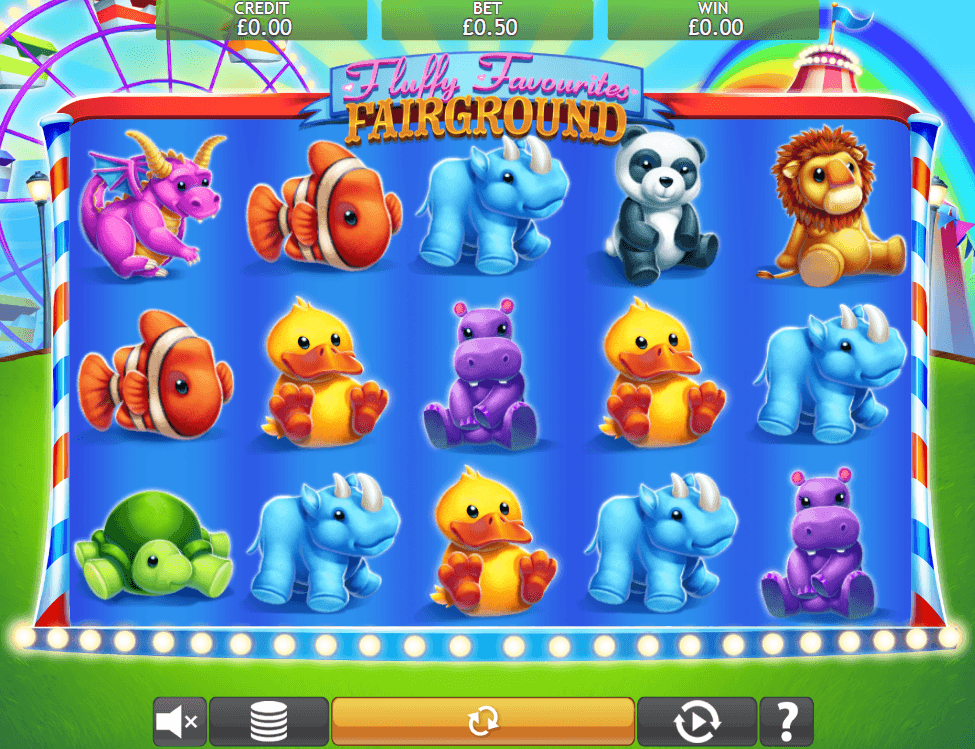 This game is not only rated so highly because of the theme but also for the outstanding bonus features that it offers. If you enjoyed playing Fluffy Favourites Fairground you may also want to play our best payout slot games online to play.