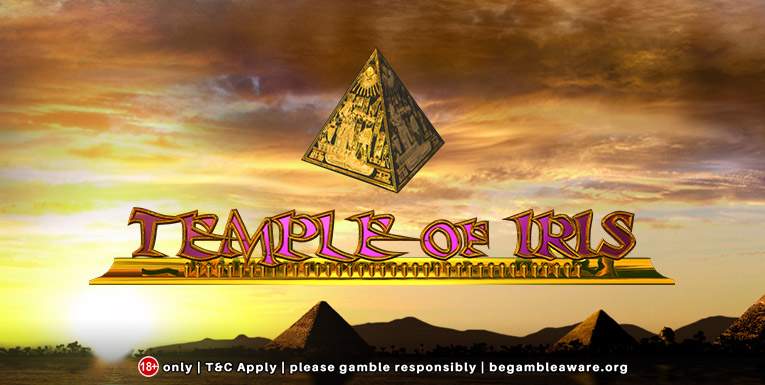 Temple of Isis slot machine is one of the most iconic casino games in the world. This Eyecon slot game has been renamed Temple of Iris today, but the gameplay remains the same.

Temple of Isis has 5x3 reels structure and 25 paylines, while punters can win up a jackpot of 1,350x their original bet. Bets start from as low as £0.01 per spin up to £300. Check below the main points related to Temple of Isis slot, while you can read our full Temple of Isis review 2021 below for more details:

Theme of Temple Of Isis Slots

Unwrap yourself and find your way to the abandoned temples of Iris. A slot game from the fantastic game's developer, Eyecon. Temple of Isis slot, is one of great mystery, where players can ncover the secrets of ancient Egyptian. Find Iris' hidden treasures, and loot the hidden rooms inside the sphinx and the pyramids as you play Temple of Isis on Easy Slots, through desktop or mobile.

Many have travelled from to these parts to glance at the country's wonders and monuments. The Egyptians are the creators of writing, clocks and the police. (That's the civil force of the state, not the band). And, now they are associated with Eyecon's new slot game, Temple of Isis. Experience mystery and fun from one of the best online play slot games now!

The ancient Egyptians were one of the most iconic and successful civilizations in the history of mankind, which has also played a role in the slots developed by many, carrying an Egyptian theme. They were located in the north of Africa and exists from 3100 B.C until 332 B.C when it was taken over by Alexander the Great. Around 130 pyramids have been discovered in Egypt. The creation of these magnificent structures has been the topic of much debate, which is incorporated in Temple of Isis slots.

There have been many claims of who and how these world wonders came to be. A number of civilisations have said to be the true creators. It has even been suggested that these structures were created by Aliens! Now it is your chance to check out these great structures, by playing Temple of Isis best slots game.

Eyecon - the Developer of Temple Of Isis Slots

Not many online game developers hold a candle to gaming titans, Eyecon. This company are based in Brisbane, Australia. They have a deep-rooted passion for creating unforgettable gaming experiences. They stand out as premium developers within an overcrowded industry.

Their slot titles are colourful and unique, as Temple of Isis slot, but alsonarrative-based games like the Temple of Iris 2 slot. Other popular Eyecon slot titles include:

More on Temple of Isis slot below, or try some of our other Egyptian Temple slots on Easy:

How to Play Temple Of Isis Slot

Temple of Isis is a 5 reel over 25 pay-lines slot, which awaits any player brave enough to challenge the Goddess Iris. There is a 93% RPT, which means a return to player percentage. This means for every £100 paid in, there is an average of £93 paid out. Like many slots in the Eyecon game catalogue, Temple of Isis features wilds, scatters and free games.

There are many other features that offer a variety of ways to loot that evil Iris' fortune. The background of Temple of Isis slot title is one that takes place among the iconic pyramids in the Sahara desert. It is a beautiful sunset, which we could not stop staring at! 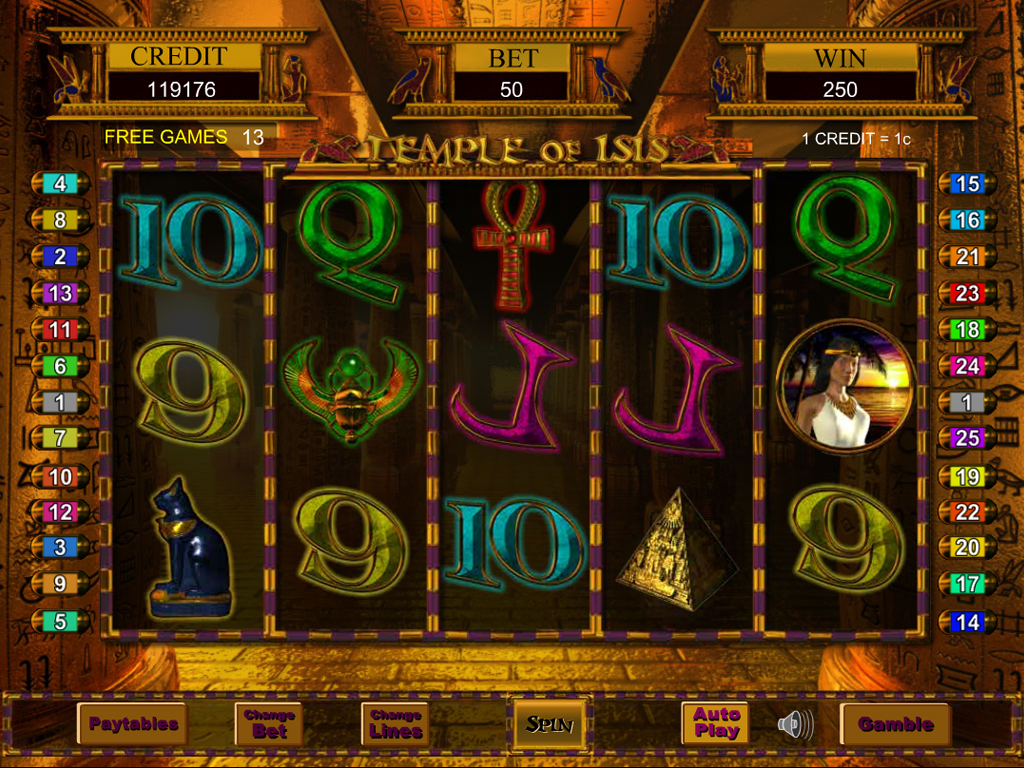 Symbols of this Slot

All the symbols that appear in Temple of Isis slot are images found in Egyptian mythology. Authentic Egyptian hieroglyphics are used as symbols in this game. They are the cats and eyes, for those less familiar with Ancient Egyptian history. These symbols offer a variety of cash pay-outs, which depending on the combinations you receive.

There are lower scoring symbols at play in Temple of Isis which take the shape of standard playing card symbols. The King is red, the Queen is green. Contrastingly, the Jack is coloured pink, the 10, baby blue and the 9s are yellow. Our favourite is the Ace which is a deep royal blue, our favourite colour. To make the most of this game, we suggest keeping right on, by spinning multiple reels.

Our favourite Temple of Isis symbols are the ebony and gold-trimmed sphinx cats and the golden snakes. Sssssss... There are also golden pyramids, which when activated, project bright white light! The glow is overwhelmingly exciting. This is because the Pyramids are the SCATTER symbol! So exciting you will want to walk like an ancient around your bedroom! 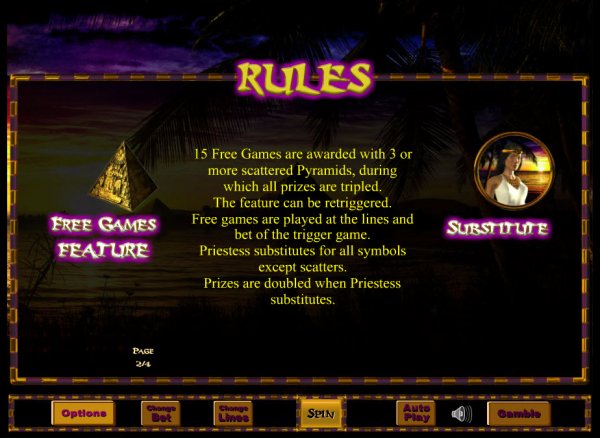 The WILD symbol is the alluring Egyptian priestess! This beauty can transform into any other symbol on the reels of Temple of Isis, apart from the SCATTER. She can combine with the other symbols to create winning combinations. She gives you even more of a chance of victory! Her illustration is beautiful. She is presented in traditional Egyptian garments. And, she wears the authentic and 'eyeconic' Egyptian eye-makeup.

The sound effects within this slot game are extremely fun retro slot game sounds, that you will know and love! Although, we would have enjoyed a catchy, Egyptian-style song to play in the background.

Pay by mobile casino uk is the best option to access Temple of Isis slot game at Easy Slots. Check it out.

The Verdict on Temple Of Isis

We loved this Egyptian-themed slots game, no question about it. Honestly, a great, great game. No other ancient Egyptian slot game compares to Temple of Isis. You can win billions and billions of coins while experienced action-packed gaming fun. Trust us, you will love it. The visuals and sound effects in this game are extremely appealing to the eyes and ears of players, which alongside the bonuses of Temple of Isis - position in it as one of the best slots of 2021.