HADOUKEN! We always dread adaptations of things that meant a great deal to our childhood as there’s always a risk that free games slots developers will mess things up and make us hate something we once loved. Luckily, NetEnt have absolutely smashed this one out of the park.

One of the best slot sites around in the form of Easy Slots brings you Street Fighter II: The World Warrior. This legendary franchise has been brilliantly adapted to the slot game format, with incredible results.

NetEnt are one of the biggest names in online mobile slots pay by phone bill games and its easy to see why. They routinely produce high quality slot games, and you’re unlikely to come across an online casino that doesn’t carry a NetEnt title.

There are several of NetEnt’s best slots that you may have come across before:

The stakes for this slot game range from 20p to £700, and the RTP averages out to 96%. The game uses a 5 by 5 grid and a Cluster Plays game engine. This means that wins come when 4 or more of the same symbols appear in a cluster. 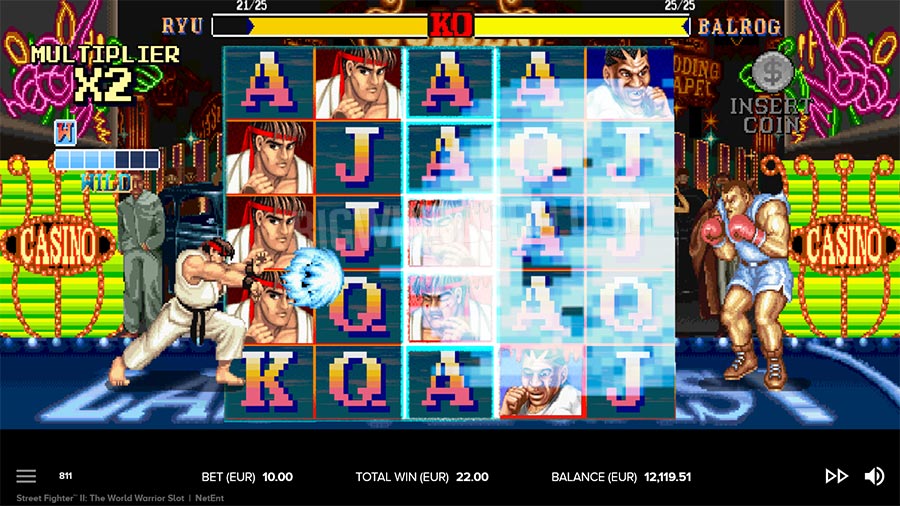 The amount of bonus features are the best things about this casino slot game. They’re varied and help you maximise your money.

Avalanche feature – If you’re able to form a winning combination, you’ll trigger this feature. The winning symbols disappear leaving space for a new avalanche of symbols. The avalanches subsides when no new wins are formed.

Battles feature – This feature really takes you back to the console days of playing Street Fighter. Prior to the start of a battle in the base game, you have the choice of 8 characters from the Player Select screen. For every battle, a random opponent is chosen to fight your chosen character. The main game battle lasts for an indefinite number of spins and ends when 1 of the characters’ health points are reduced all the way down to zero.

Beat the Boss - This is activated when you completely drain your opponent’s health bar in the main game. This bonus game has 4 levels, where you face different opponents with a different multiplier on offer each time. You will begin at level 1 with a 2x multiplier, working your way up to a 10x multiplier on level 4.

Car Smash - Another feature activated by beating your opponent in the main game. You’re able to take control of your character with the control panel to destroy the car. If successful, there’s a cash prize on offer worth between 5 and 15 times your stake. 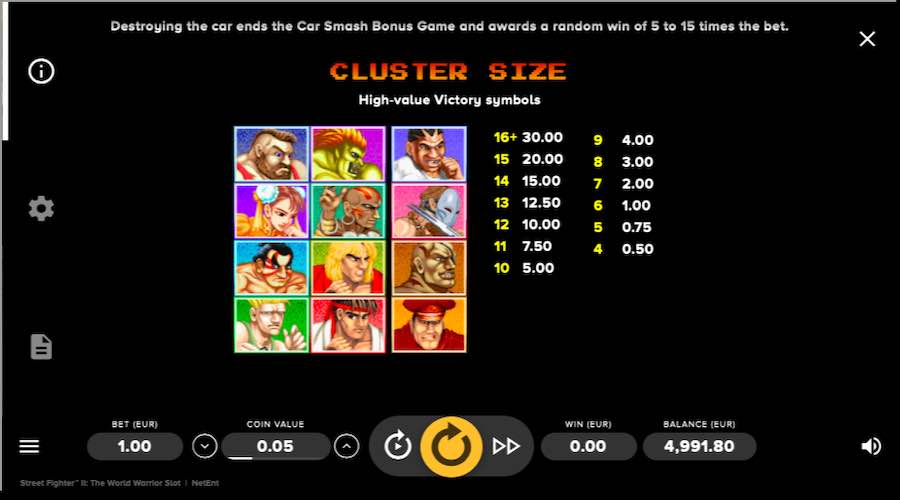 This casino slot game is so much fun. NetEnt’s production is to an incredibly high level, to the point where at points this slot feels like an actual video game. There’s an incredible amount of bonus features that keep the game interesting, and they utilise fan favourite characters we all love. You should definitely give this and the Spartians slot a try!