Prepare for a slot game that’s out of this world – literally! Embark on an extra-terrestrial adventure in the form of Spartians! As one of the best slot sites around, Easyslots brings you all the fun and mystery of outer space straight to you.

Martians and Spartans prove to be a match made in heaven in this online casino slot made by Genii. With 5 reels and 30 paylines at your disposal, this sci-fi and fantasy crossover will keep you entertained for as long as you need it to.

If you’ve ever wondered how aliens from outer space would act when they’re inspired by some of the fiercest warriors in Roman mythology, then wonder no more. Playable on mobile, desktop and tablet, there’s every opportunity for you embark on this other worldly free casino games adventure.

Despite the fact that they’re not the most well known developers when it comes to online slots pay by phone games, Genii (pronounced jee-nee-ahy) have been in this game for a long time.

This developer has over 15 years’ worth of experience when it comes to slot games, and it shows in the games they produce. There’s already over 130 online casino games in their portfolio, and they’re constantly on the lookout for new innovations that can make their slot games even better.

They know what their customers want, and have become pretty good at delivering high quality products. They specialise in producing simple, reliable games with high production values. Expect high resolution graphics when you play a Genii slot game.

Here are some of Genii’s best slots that you may have already come across: 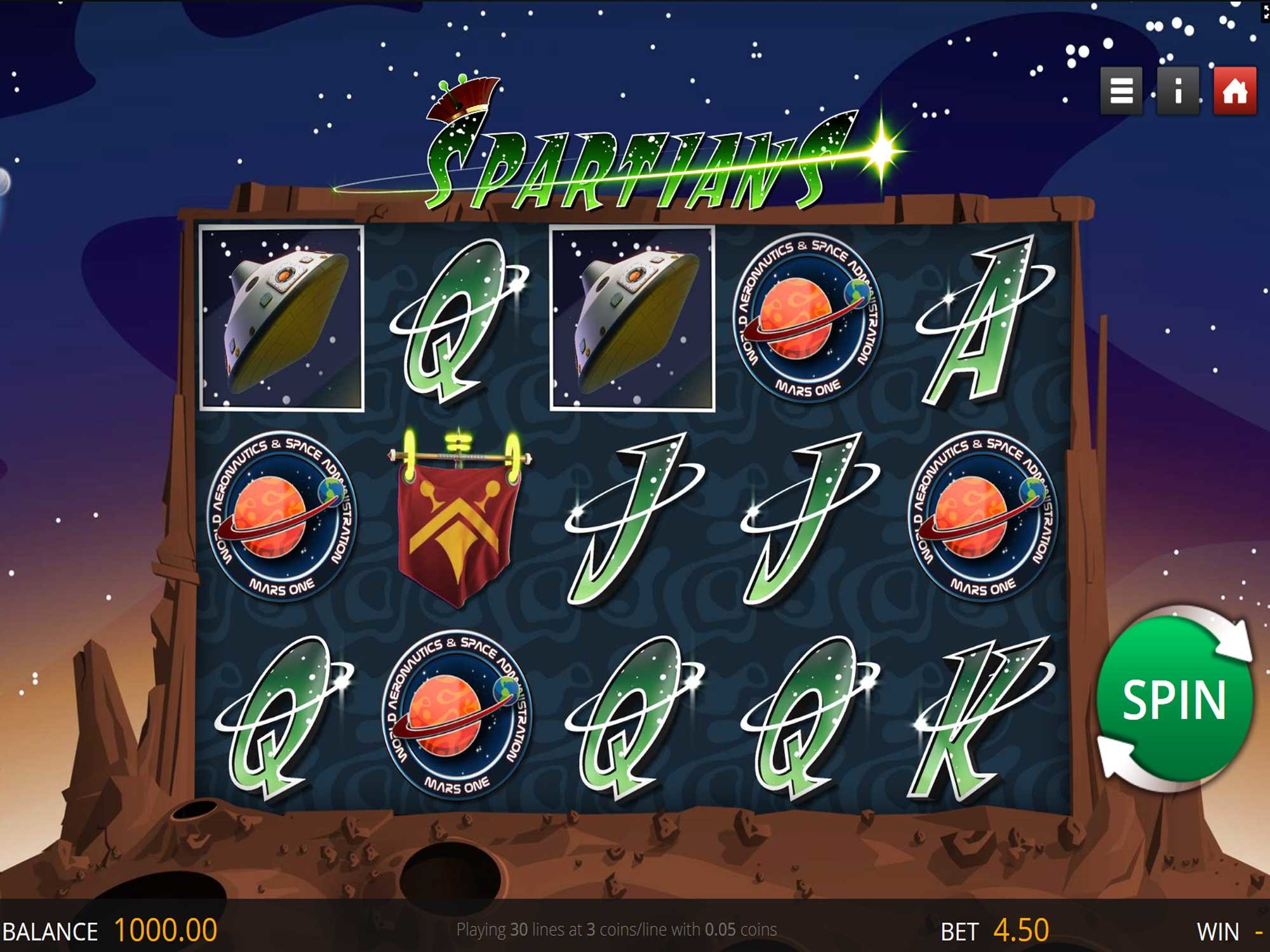 Spartians has a 96% RTP, and the stake ranges from 1p to £37.50. As mentioned above, it comes with 5 reels, 3 rows and 30 paylines. In order to win you must match at least three symbols on adjacent reels from left to right, starting at reel 1 and working towards reel 5.

In addition to playing card symbols A, K, Q and J, other icons on the reels include the Spartian, robot, sword and shield, UFO, flag and mars button.

The Spartians are the most valuable symbols, potentially worth up to 1000x your original stake. The robots are worth up to 500x, and the sword and shield and UFO are worth 150x and 100x respectively. The flag is worth 80x, the mars button is worth 40x, and playing card symbols are worth 30x. The green alien acts as the game’s wild, replacing all symbols except for the scatters.

The outer space theme features heavily throughout. In the background of the game are rocks and mountains set in outer space, with flying saucers floating in the distance. The dark colours and 2D alien characters also come with their own soundtrack that accompanies you whilst you play. 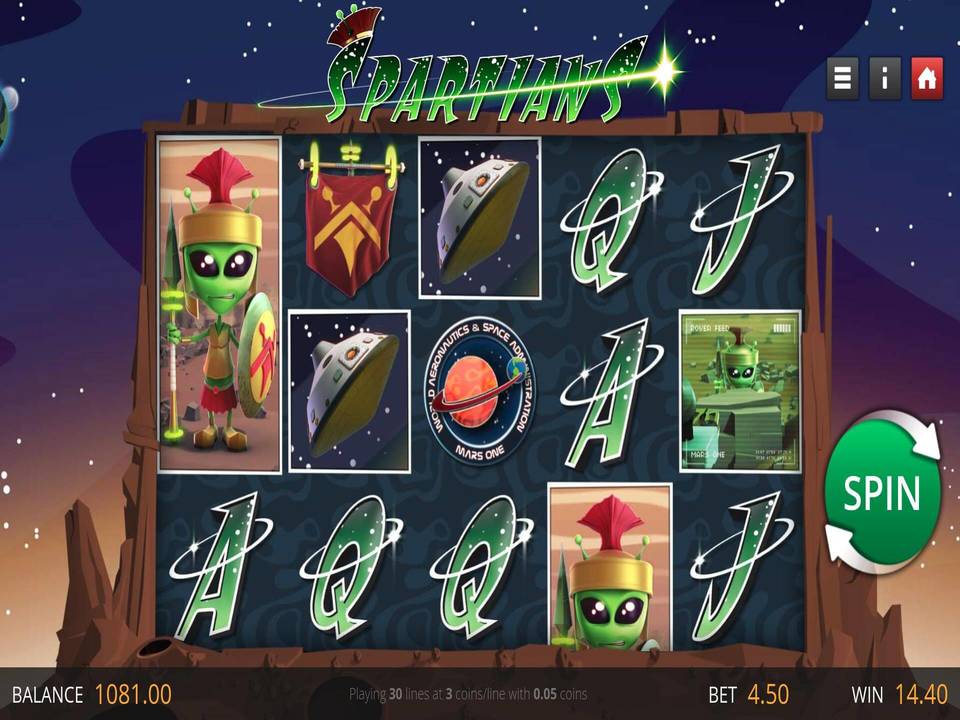 There’s only really one bonus feature in this slot game. Although Spartians isn’t loaded with extra rounds, the one that does come with it can be potentially lucrative if you’re able to trigger it. 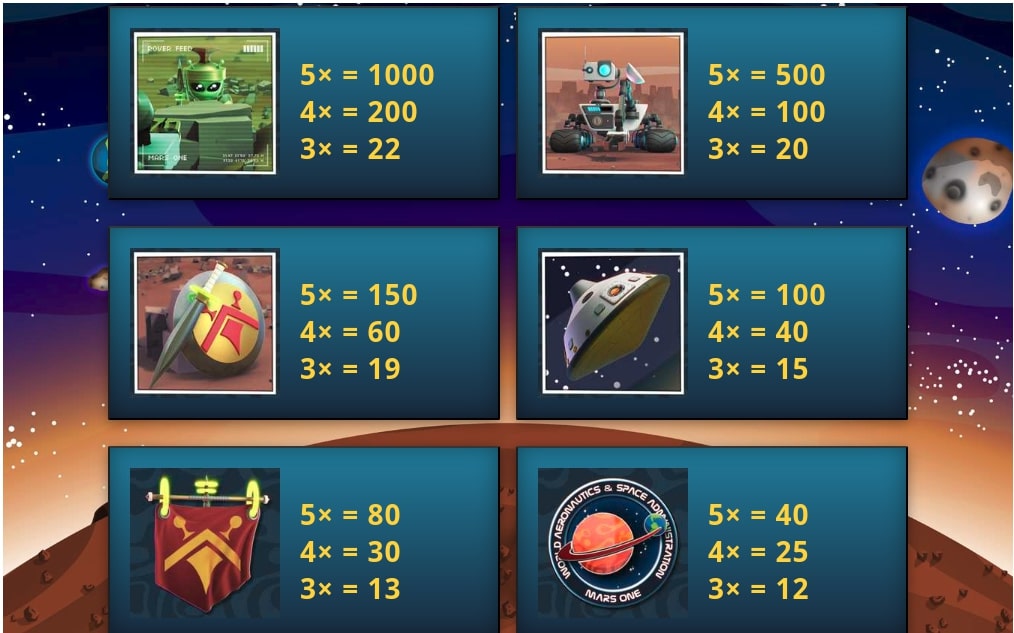 Overall, there’s much to like about this slot game. Visually it scores highly, with the sci-fi aesthetic being executed very well. The gameplay is simple, which makes it an ideal game for new or inexperienced players to try before they venture further into the world of online slot games.

The lack of bonus features is a shame, as the game can feel quite repetitive after a while. However, the free spins can win you enough money that you won’t mind too much. It’s something fun to pass the time and also win yourself some cash. If you want to try something a little different, then give the reels of Slingo Riches slot a spin.