Red Tiger Gaming are back with another Ancient Egyptian top online slots uk having released Vault of Anubis previously. This time they have brought to us Jewel Scarabs, a five by three reel setup slot with 9 ways to win. It’s clear that Red Tiger like a fantasy or historically themed slot having previously released Atlantis also. But we’re not complaining one bit, as these are some of the best slots we’ve played.

Jewel Scarabs continues that developing theme we’re seeing from Red Tiger of great themes, lovely cartoon-style graphics and easy-going game play. With an RTP of 95.77% it’s a little below average, but with a possibility of winning 5245x your stake with just one spin the winning potential kind of makes up for this. That’s the kind of jackpot that matches with some of the best online slots on the market.

Bet anywhere between 10p and £10 to have a chance to win those precious jewels. You can play Jewel Scarabs on any device: mobile, tablet or desktop at the best slots sites including Easy Slots today where you can find more casino games to try here.

About Red Tiger - the Pioneers Behind Jewel Scarabs

Although Red Tiger Gaming have only been around for six years having been formed back in 2014, they have really picked up the momentum fast, and put out some of the best online slots that we’ve played since.

The Isle of Man-based team are famous for thinking outside the box, bringing all kinds of cool and quirky themes and features into their slots. They are committed to bringing out fresh slots monthly, which is quite a big thing for a relatively small team although they have been pretty successful with it so far.

Some of the slots haven’t hit quite as well as others but all in all, Red Tiger Gaming will be pretty happy with the fact that they’ve put out some of the best slots in the market and so many of them as well. Some of their highlights include:

And now Jewel Scarabs which, among some other Red Tiger slots, is available at the best slots sites, including Easy Slots. 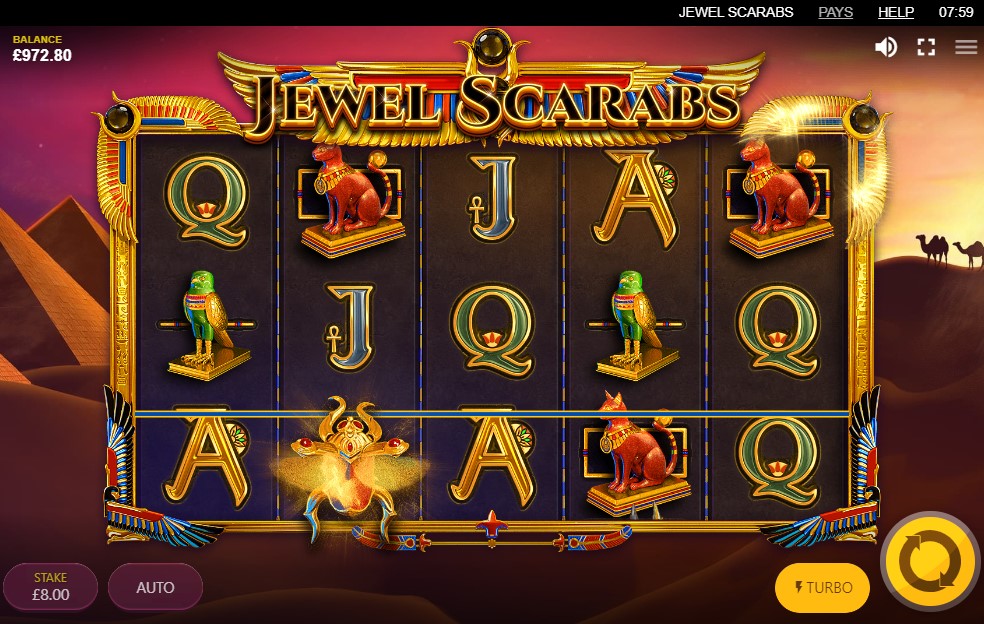 Compared to some of the other Ancient historical or fantasy themed games we’ve played, Jewel Scarabs is a little more light hearted and this is reflected in the relaxing soundtrack and friendly looking cartoon-style graphics that Red Tiger Gaming have become quite popular for.

The sunset (or sunrise) desert sands with two camels stood on top lays out the background, and the pyramids to the other side. The reels themselves are made of Egyptian gold with jewels encrusted in them, much like the symbols themselves which are the regular royals followed by the higher value items which are Anubis, the Eye of Ra, a falcon, Bastet plus a golden scarab symbol that represents the scatter and the wild in Jewel Scarabs. 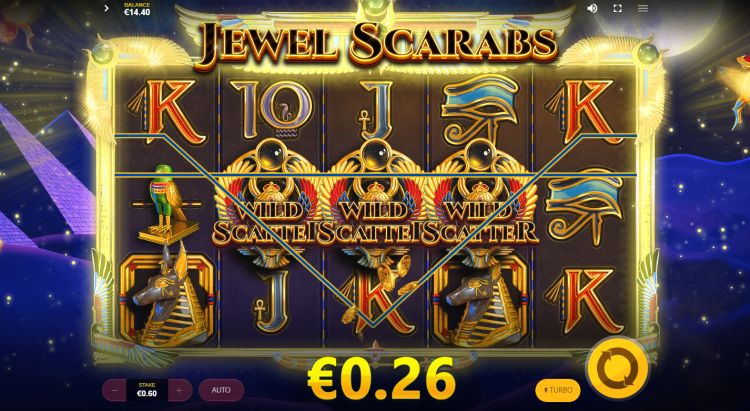 This golden scarab symbol is the secret to success in Jewel Scarabs which can be either the wild or the scatter, therefore either replacing another symbol to get a winning combination or, when three or more appear, will activate the Golden Spins feature.

This means that you, as the player, are awarded a random number of free spins. Plus, those golden scarabs will lock in place and have a multiplier attached to them that can increase in value throughout your free spins. This is the best way to rack up the big money in Jewel Scarabs so definitely keep an eye out for that golden scarab throughout your game!

Having a symbol represent both the wild and the scatter in Jewel Scarabs was an innovative take from Red Tiger Gaming that we enjoyed. This, coupled with the beautiful gameplay and excellent winning potential gives Jewel Scarabs the green light from us.

Some of the best online slots recently have taken place in Ancient Egypt, and this one from Red Tiger carries that theme while putting a slightly friendlier twist on the setting than we’re used to, making the game an all round pleasant playing experience. If you want more exciting experiences, then we strongly recommend the Great Rhino Megaways slot!