Take a safari deep into the savannah with Great Rhino Megaways, the latest best UK slots from legends Pragmatic Play. A tribal soundtrack beats away to set the tone as you dive into six reels, a whopping 200,704 ways to win and a higher than average RTP for a Megaways slot at 96.58%. Nice!

Based in the iconic Megaways engine, hold onto your seats as you’re in for high volatility, massive win potential and a whole lot of fun. Join and play slot game Great Rhino Megaways on mobile, desktop or laptop at the best slot sites if they offer them, and you already know Easy Slots does…

About Pragmatic Play - the Pioneers Behind Great Rhino Megaways

One of the fastest growing developers in the business, Pragmatic Play are experts at graphics, bonus features and all around exciting gameplay. Since their formation, they’ve produced some of the best slots available and are really racking up a streak in that respect.

The guys have produced as many as 150 slots in their time, and some of the highlights of those are as follows:

And now, they’ve brought you Great Rhino Megaways which is another one to add to the list that Pragmatic Play seem to be racking up of some of the best online slots available, most of which are available at the best slots sites just like Easy Slots. 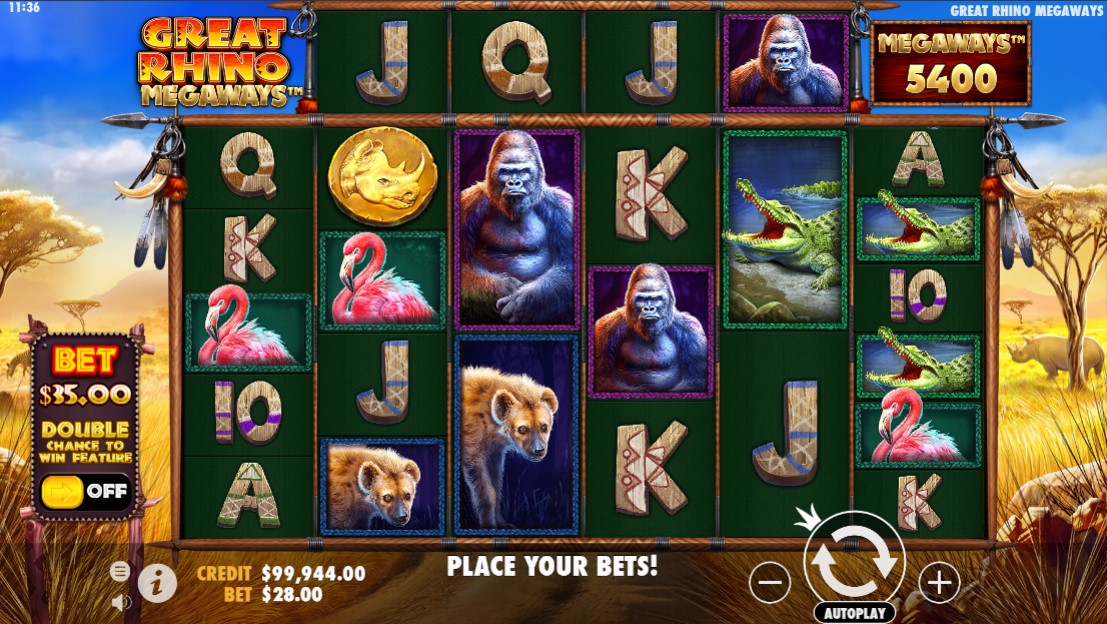 Every time we see the word ‘Megaways’ in the name of a slot we get excited. Why? Because Megaways slots are some of the most, if not the most, exciting slots you can play. Developed by Australian giants Big Time Gaming, the Megaways engine began with the classic slot Bonanza back in 2016 and since then, has given its name to some of the best online slots available, Great Rhino Megaways included.

You can win in a Megaways slot in as many as 117,649, which might shed a little light on why they call it that. They’ve been known to fork out wins of 50,000x your stake, so while volatile as anything, Megaways slots are perhaps the most exciting in the world.

Once you pass through the low value standard card symbols, you’ll notice the jungle-themed higher value symbols. These are the animals, specifically the flamingo (the highest value symbol in Great Rhino Megaways), cheetah, gorilla, crocodile and hyena. 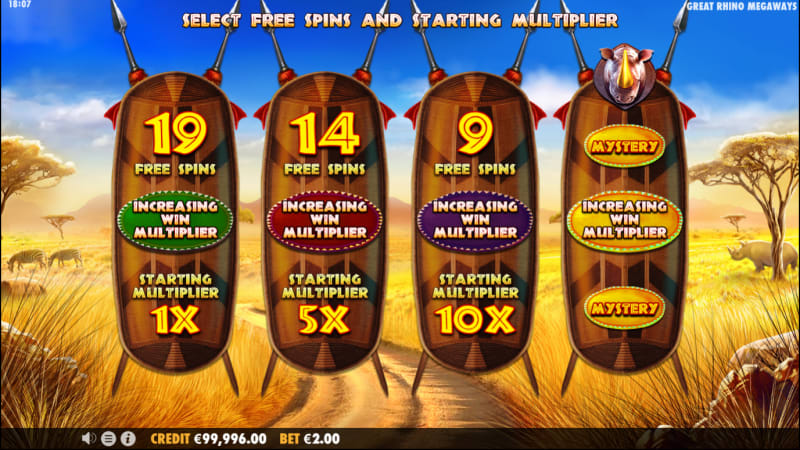 Just the one bonus round in Great Rhino Megaways, but we couldn’t ask for a whole lot more considering the crazy amount of ways to win already presented to us. Decide from one of the following combinations if you land four or more scatter symbols across the reels:

It’s up to you to decide which one of these will serve your game best. The safer option is probably the former as banking on that 10x multiplier with just five free spins is slightly risky business, but it depends how lucky you’re feeling on the day…

Be aware that this is a very highly volatile slot, so if you’re a newcomer to the world of online slots you may grow impatient. Although the RTP is fair, it can take a very long time for you to get a win, so if you’re not a relatively seasoned gamer we might recommend you sit this one out until you’ve indulged in some slots with a lower vocality to warm up.