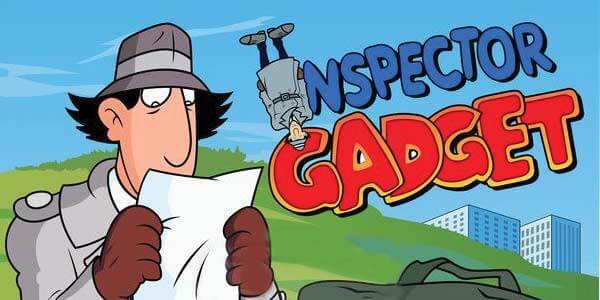 Inspector Gadget by Blueprint Gaming is a 5 reel, 20 payline best online slot game with features on here including 5 Go Go Gadget modifiers in the base game and 5 main bonus features. You can play this Inspector Gadget Blueprint slot on all Android and iOS tablets, PC and smartphones for stakes starting from 20p to £200 a spin.

If you want to relive your favourite cartoon detective show from 80s, you are in for a treat with this Inspector Gadget slot by Blueprint Gaming. Symbols on the reels include card values A to J, police cars, safes, secret files and handcuffs. The Inspector Gadget logo pays 25x your bet when 5 land on a payline. You will win that same value when the bomb symbol lands as the wild. The wild can replace all the other symbols except the scatter

Inspector Gadget helps trigger a base game modifier which could reward any of the following; stacked wilds, additional wilds, transforming symbols, colossal symbols and a chance to activate the main bonus features. When the base game modifiers land, the paylines expand to 50. A mallet lands on the reels and transforms a loss into a win.

The scatter symbols activate the main feature round.

Blueprint Gaming has its main office in Newark, UK. The company has been developing live casino slots for several years. Blueprint was acquired in 2008 by the Gauselmann group which helped the company get even more exposure in the industry.

The company operates slot halls and live casinos. Thanks to that partnership, Blueprint Gaming became able to establish business partnerships with large reputable gambling companies. One thing players like about their best slot game to win is that they don't require a download which means that they are compatible with today's modern online casinos.

Blueprint Gaming is licensed to operate in Alderney, where the company's games go through thorough testing. Easy Slots has a wide selection of games from them.

Slots pay by mobile phone like this game are adored and played by uk slots site punters!

Inspector Gadget by Blueprint Gaming has bright and glossy cartoon visuals. It is a well put together slot with the highlight being the features. There are several of them on offer both in the base game and bonus game. This Blueprint slot is very entertaining especially for a player who loves the show. If you are in the mood for some detective nostalgia, you should definitely give this slot a spin. Play Enchanted Slots too!