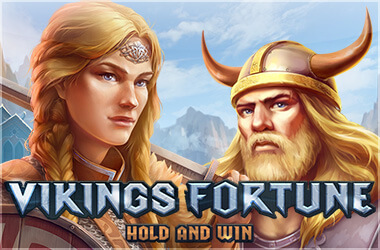 Vikings Fortune: Hold and Win is a best slot sites game from developer Playson. It offers five reels, three rows and 25 paylines of entertainment to players, and has a couple of interesting bonus features too. The game has some impressive graphics too and has an exciting and immersive feel to it. The Return to Player rate of 95.02% gives you the chance to win big. Read on to discover more about the game and Playson.

The reels for this game are held in what looks to be a stone carved frame, which is adorned with runic carvings. The backdrop for the reels is a dramatic fjord, with a Viking stronghold and the prow of a longship adding some extra detail. The game makes use of dramatic music, which helps add to the atmosphere of high adventure in the Viking era. You might need to turn it down during a long session of play, though, as it can become somewhat repetitive.

The lower value symbols on the reels are letters and numbers, though they have been rendered as Viking type carvings. The higher value symbols are all characters in the story of the game. You can see Odin’s raven, a wolf, a warrior in a horned helmet who resembles the Norse god Thor, and a shield-maiden.

The game’s wild symbol is the shield. This can appear on all five reels, and will substitute for all the standard symbols to create winning combinations. There are two bonus features in the game: Free Spins and the Bonus Game. Free Spins features expanding symbols which can occupy 2x2 and 3x3 places on the reels. If five or more golden coin symbols spin in, you trigger the bonus game, which consists of a streak of respins.

Pay by mobile is the easiest deposit option for casino players who want to enjoy slots online on the go! Join today this best-rated site today and start spinning!

Playson is a name which should be familiar to many people who enjoy playing slots online. They have produced an extensive catalogue of online fruit machines, with over 40 of them making use of innovative Omni-Channel HTML5 technology.

The company employs 250 staff in its offices across the world. They also develop other types of games for the online casino market, developing versions of more traditional casino table games like blackjack and roulette alongside their slots offerings.

The company was founded in 2012, and now has its main offices on the Mediterranean island of Malta, as seems common with many companies in the gaming industry these days. Playson has also collaborated with other games developers, including Leander Games, Pariplay and 1×2 Gaming, for some projects.

Other best slots games from Playson include:

If you like playing slots in a casino, you are sure to be impressed by Vikings Fortune: Hold and Win. The game looks and sounds great, with the symbols on the reels beautifully rendered by the game’s graphics team. The bonus features are entertaining and offer plenty of opportunity to win prizes too.

Look out for Vikings Fortune: Hold and Win in your favourite online UK casino! Shamans Dream Slots is another slot we love and play. Click here to learn more.