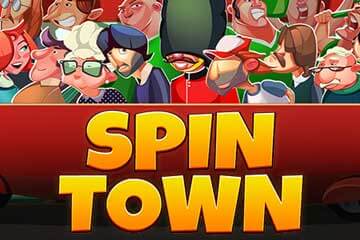 Spin Town is a slot game from the British developer Red Tiger. It has five reels and four rows of entertainment to offer to players, and has 40 fixed paylines. The theme of the game is somewhat bizarre, it has to be said, and is based around a story about a gang of jaywalkers. Crossing the road has never been used as a theme in many forms of entertainment, it has to be said! Experience the best slot sites game now!

The setting for this game appears to be a busy London street, with a red bus full of characters appearing on the game’s welcome screen. The main character when the action starts is a young skateboarder who has to navigate his way across the road.

The symbols used on the wheels reflect the sort of vehicle related theme, with car keys, crash helmets and ghetto blasters appearing alongside the usual lower value numbers and letters. It is worth looking for the wallet full of cash, as this is the most valuable symbol in the game.

There are three bonus symbols to look out for. These are the footballs, a vinyl record and the guardsman. There are various wild symbols to watch for in the base game, and they take the form of the characters that congregate at the side of the road waiting to cross.

These characters include the skateboarder, an old lady and an elderly man. Sleepy wilds walk across the reels, and may ‘fall asleep’ and stay in place for several spins, substituting for other symbols. Speedy wilds move two positions across the reels in each spin. Couple wilds offer the chance to pick up 2x multipliers when they bump into each other on the reels. Why not also try Mermaid Slots too?

Red Tiger is a British games developer which is based on the Isle of Man. It is a very young company, having been founded in 2014 by a group of gaming experts and entrepreneurs with their roots in various countries across Europe and Asia. As might be expected from a company with its headquarters on the Isle of Man, Red Tiger holds a licence from the UK Gambling Commission, as well as the Alderney Gambling Control Commission and the Malta Gaming Authority.

The defining technical feature of Red Tiger’s titles is that they make use of an HTML5 framework, which allows their best slot game to win to be played on devices of various sizes. Innovative features that are often deployed in their titles are ceiling jackpots and daily progressive jackpots.

Other online casino games from Red Tiger include:

To find more slots by Red Tiger Gaming, make sure that you head to EasySlots!

If you like playing slots online, you are sure to find plenty to enjoy in this game. Spin Town has much more action in it than many other games, and there are more features and characters to enjoy than in your typical slots game. Fans of online fruit machines will particularly enjoy the way that the wild symbols operate in this game.

Pay by mobile casino sites have been rising drastically, thus we offer this slot for on the go gaming – click here to learn more and play our games with free spins!