MONOPOLY Bring the House Down

Who doesn’t love a game of Monopoly? It’s that one board game that both unites and breaks up families in the space of several hours, with nearly everyone seething with anger by the end. No matter your love, or hate, of this game, it’s not nearly as fun (and easy going) as Barcrest’s slot machine Monopoly Bring the House Down.

This is a very aesthetically retro, best slots online game. Graphics harsh on the eyes, the imagery rough in its detail, and the symbols less than unique, and yet there’s so much to love about how classic this title is. Also, players can to savour 40 paylines of action, thus making this a sizeable slot machine that’ll allow you to get stuck into the gritty side of becoming a highroller.

If you’ve never heard of Barcrest, it could be because they’re now part of the SG iGaming brand, having been purchased by them in the noughties. Although it would be easy for us to lump the two together, Bacrest has a history that stretches back to the 1960s, and so the company deserves its own credit time and again.

Over the years they’ve gone from bricks and mortar gaming to interactive online software, earning them a spot in the hearts of many hardcore casino players. They may not be the most modern of brands, nor do their games dazzle with pleasing aesthetics, but they have a lot of depth when it comes to bonuses and that's what we're all about. Still, they are among the top online slot games developers who think of their players' gaming experience! 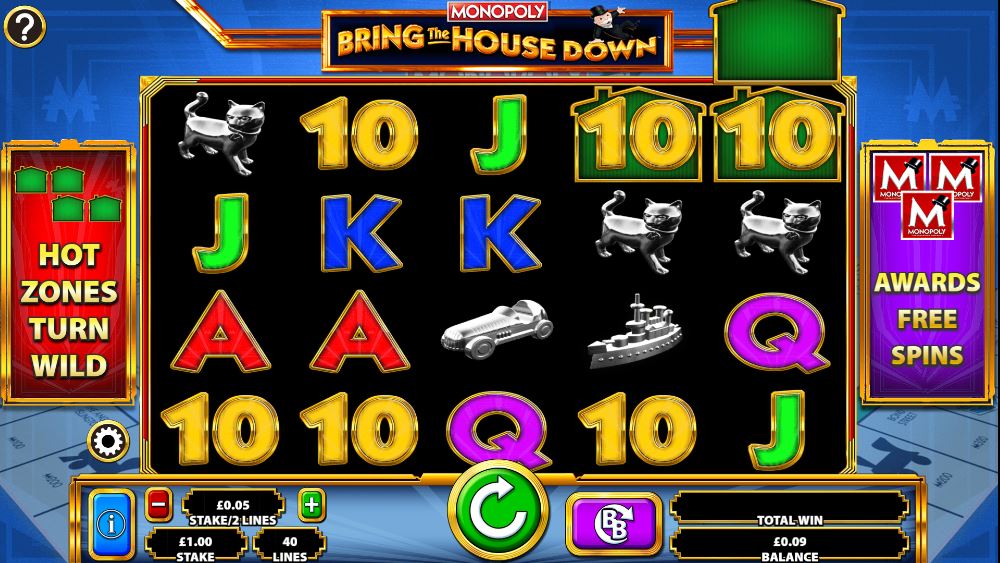 As much as we’d love to cover every aspect of this slot, there’s so much going on that we’d need three more reviews on top of this one. That being said, we’ll do our best to give you the lowdown of what’s what inside the world of Monopoly Bring the House Down, if for nothing other than to smugly grin as you make a killing on the properties, while your family watches.

* Hot Zone Feature: Green houses on your reels mean you’ll get a fun wild bonus, a rather simple feature that turns blank symbols into wilds, and yet it goes a long way in making this activity more interactive.

* Hotel Upgrade: This can happen at random, with the green houses turning red, aka becoming hotels, which in turn means that all the wilds now come with additional multipliers.

* Free Spins: If you get more than three scatter symbols on the grid, you’ll unlock eight free games. However, unlocking the spins can be tricky, as the scatters can only land on reels one, three and five.

* Chance Card: A bit like the Hotel Upgrade, this special occurs at random during your playthrough, with you having to simply choose from the three hidden cards displayed. If you choose correctly, you’ll get a Hot Zone placed on the reels.

If you fancy to pay with phone credit slot, then this online game is ideal for you.

As you can see, just because a slot may look a little worse for wear, doesn’t mean that it doesn’t hold any surprises for those willing to play. Monopoly Bring the House Down is a massive game, both in winlines and its paytable, yet it’s affordable at 20p per game. This low price is part of what makes this game for us. If you enjoyed Monopoly: Bring The House Down why not try Legend of The Pharaohs