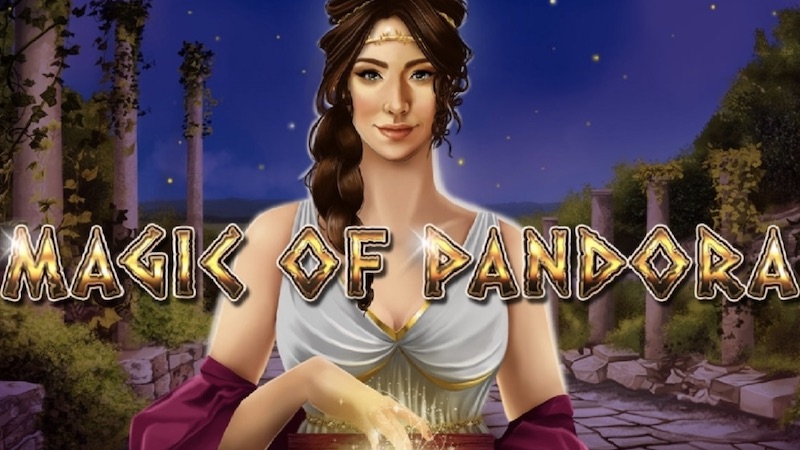 Magic of Pandora is one of the online slots games available in Easy Slots that is based on Greek mythology. 2 by 2 Gaming brings you this 5 reel, 25 payline slot that you can play on all of your devices offering bets from as low as 25p up to £25 per spin. Pandora’s box opens up to award you added wilds, extra paylines and wild reels in the base game. It also has a bonus round that initially gives you 16 free spins along with modifier extras.

Magic of Pandora slot sites uk title is one of the best at Easy Slots, with it’s picturesque backdrop of a stone road lined with pillars and trees is the best online slot to come from 2 by 2 Gaming and you can play it on Easy Slots. Symbols on the reels include diamonds, clubs, spades and hearts symbols. In addition to those, included are an eagle, a clay vase, a dove, a flaming torch and a hunky looking male.  Pandora is the most lucrative player in this game named as  3, 4 or 5 Pandoras lined together will land you a payout of 1.6x, 5x or 40x your initial bet. The logo of Magic of Pandora is the wild which can only land on reels 2, 3, 4 and 5 and it can  substitute any of the standard symbols.

Bonus Features in Magic of Pandora

During a base game spin, you could get lucky and land 1 of the following modifier extras or slot bonuses, as they are commonly called:

Why not play today pay by mobile slots like this one?

2 By 2 Gaming may not be a company you’ve heard of, but they have 65+ released slots, 125+ collective years of experience and key members with experience from other successful software companies, it can be considered one of the best slots developers. Expect geographic and historical themes and different volatilities from them. Magic of Pandora with its 2,000x your stake maximum payout and Grecian theme is simplistic but with great payout and you can find it on Easy Slots along with their other new online slots.

The Verdict on Magic of Pandora

Whether or not you are into Greek Mythology, you can’t deny that Magic of Pandora is one of the best new slots to come from 2 By 2 available on Easy Slots. The visuals have been described as clear and crisp which is a bonus to those who really value graphics. The slot promotions were not wrong in playing up their modifiers as it gives you plenty opportunities for a win. Pandora’s box is very much a paradox in this slot as it can bless you with 1,000x your stake and if you manage to get 50 paylines, you stand a chance to win up to 2,000x the original bet you placed.