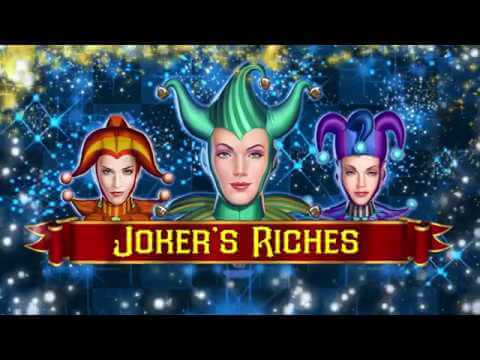 Joker’s Riches by High 5 Games is one of the best online slots 5 reel 40 fixed payline game with features like free spins and wilds. The free spins round includes active wilds which promise to reward even bigger payouts. Players will get immersed in this Middle Ages theme where they will climb from rank to rank while collecting delicious payouts. Still interested?

The game plot is based on the royal family and the medieval kingdoms. The king, queen and 3 jesters are the main characters of the slot joined by card values A, K, J, Q and A. Gameplay is pretty standard with the design and animation being extremely flawless.

Pay by mobile casino uk is by far the best option for this game at Easy Slots sites uk. Check it out today and claim free spins for our featured titles.

High 5 Games was established in 1995 and released their very first video slot machine game in 2002. Later in 2008 the company earned huge success thanks to the release of Da Vinci Diamonds, one of the best slot game to win in history. H5G came out with another banger in 2011- their Golden Goddess slot which became another worldwide hit.

The company has over 300 games listed in its slot catalogue. These are played in more than 50 countries all over the world. The thing about High 5 Games is that they develop hit games for other companies e.g. Da Vinci Diamonds (the company's best-performing slot) together with Pixies of the Forest which have both been developed for IGT.

These 2 slots have kept land-based slot players busy for years and are also the reason online slot players keep coming back. Hot Hot Hot (produced for Bally)  is another slot that is still a major hit since its 1999 release.

Their slots are popular, but it's also the company's effort to incorporate highly innovative features that makes their slots a hit. High 5 Games revolutionary 'Tumbling Reels' feature in Da Vinci Diamonds, Split Symbols in slots like Cats and the Super Stacks feature have been replicated by other slot developers time and time again.

You can enjoy High 5 Games slots on any of your favourite online casino slot platforms. Fan of the developer, on Easy Slots we have even more.

Joker’s Riches by High 5 Games is designed for players who appreciate basic design in terms of graphics and standard gameplay. This is not the place where you cone looking for complex bonuses or intricate gameplay. However, if you love a good historical themed slot you won't find one better than High 5 Games Joker’s Riches. Another top slot you can play here is the Enchanted slots.