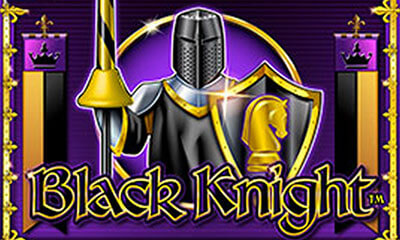 Black Knight is a slot game from WMS Gaming, that offers five reels and up to 10 rows of entertainment. There are up to 30 fixed paylines available for players, so the game offers plenty of potential to pick up big prizes.

The setting for the game is a medieval knights castle, as you might have been able to work out from the game’s title. Read on to find out more about Black Knight and WMS Gaming! Go ahead and play this top title at online slot sites anytime.

The setting for the reels is a medieval castle, and you can see imposing walls and flickering torches at the side of the action. The game deploys symbols that fit with this medieval theme, with the higher value symbols being a sceptre, a ring and a crown.

The knight’s lady also appears on the reels, along with a regal looking fellow who might be the knight himself. An old map and a jester also turn up, while the lower value symbols are the usual selection of numbers and letters.

This means that you can trigger the game’s free spins bonus feature by landing three or more of the chess piece scatter symbols, or the game’s wild symbol, on the reels. You get seven free spins, and any wilds that appear during these spins expand to fill more than one space on the reels.

If you like what you are reading in our review, then join this best online casino pay by mobile and play slots uk now. You might even win 500 free spins as you do it!

WMS Gaming has a long history that goes back much further in time than the digital age. Although you might be familiar with the name from playing slots online, it was pinball machines, not fruit machines, that the company first produced when it was founded in 1943. Harry Williams was the founder of the company. He is perhaps most famous for inventing the tilt mechanism on pinball machines.

Here are some other best slot game from WMS that you can find in an online UK casino:

Check out other games by WMS Gaming and our slot bonuses! Play Mermaid Million Slots too! You will love it.

Black Knight is a decent slots game which offers a potentially profitable free spins feature. Although not the most dramatic or action packed game that you can find in an online casino, it offers plenty of entertainment for both new slots gamers and more experienced players.

Gameplay is very smooth, and a reasonably immersive atmosphere is created by the game’s sound effects. If you’re fond of medieval TV shows and movies, this could be the slots game for you!