The Best Witch will take you on a mystical adventure into a cauldron of controversy where you must pick a side and engage in a battle to decide who is the best witch? This 5 reel is filled with all the mystical wonder that you’d expect from a game centred around two witches and will certainly have you coming back for more when you realise the cash prizes that you can win.

iSoftBet are a leading games development company that operate out of many European cities in Italy, Spain, Portugal, Belgium, and the UK. Renowned for creating an exotic range of branded and cinematic slot games iSoftBet can put their name to a range of games that includes;

The Best Witch is a new game by iSoftBet that will immerse you into a petrifying world of ghouls, goblins and witches. This 5 reel has a transient cinematic atmosphere about it that is supported by the highly detailed animations and intricate symbols that lay across the gameboard. When you begin playing this game you will be asked to pick which witch you’d like to play as. Following this you will be transported to the game board that’s filled with an array of symbols that include; voodoo dolls, potions, spellbooks and many more clairvoyant symbols.

The lowest prizes available on the game operate in a similar fashion to most other casino slot games in the fact that the playing card symbols that are represented by the letters A, K , Q, and J. Following on from this the symbols entertain increased payouts that rise and rise beginning at the glass vile, witches spellbook and cauldron. The Voodoo Doll is next on the list and this elusive symbol is perhaps the middle ground of your slot playing excitement. Next up is the Crystal ball symbol, which eventually leads us to the Fatal Light Spell symbol which is the highest value symbol on the game. 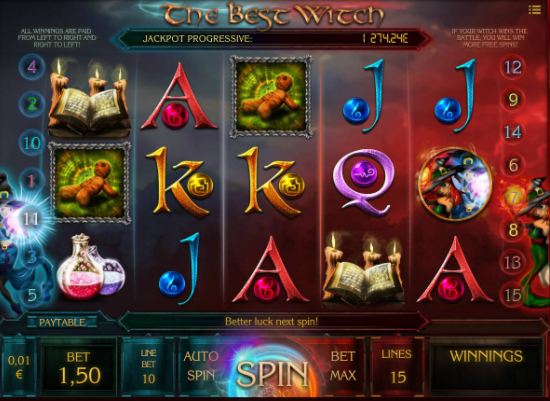 The Best Witch is literally the best witch themed online slot game that there is. It certainly does the developers at iSoftBet justice and this is all down to the intense and immersive gameplay that the developers have created. This brand new game to Wizard Slots is a perfect venture for anyone who enjoys playing games like White Wizard or Spooky Family.