Here is a among the top online slots game based on the 1979 cult film The Warriors, the film that’s based upon life on the streets and New York gang warfare. This 5 reel slot game features all the familiar faces and enemies of the motion picture film such as Mercy, Swan, and Cowboy and includes an ominous soundtrack of the city night and the howls of rival gangs to aid you on your way to some lovely cash rewards.

iSoftbet is an online and mobile game provider that provide a wide range of 5 star online slot games suitable for smartphone and tablets. The company is a trusted operator within the gaming industry that develop games which provide entertainment and loyalty amongst its clients. iSoftbet has extensive experience in creating games with some of their most popular titles including; The Warriors, Forest Mania and Robo Smash.

This popular game and booked based on Gangs in New York was turned into a video game in 2005 and then a slot based game by iSoftbet.  The game provides sounds such traffic and machinery to give it to the city feel. The Warriors is a 5- reels slot game and has a set 243 ways to win on any spin you can stake each spin 20 different ways and you select from the options of how much you wish to bet per spin.

The game takes places in a dingy subway where you must leave coded message for the gang that are spread out across the city and warn them that the rival gangs are out to get them. Messages can be left for your gang members l using the graffiti style letter and number symbols, you can win up to 200 coins by matching 3 to 5 symbols.  The game offers many ways to win big prizes and is worth play.

You need to round up as many gang members as possible some gang members are worth more than others. For example, Cleon is worth up to 200 coins, Ajax is worth 250 coins, Swan is worth 500 coins and the highest one in Mercy worth 1,000 coins.

Fancy pay by phone slots? No worries. This slot is also available on your phone! 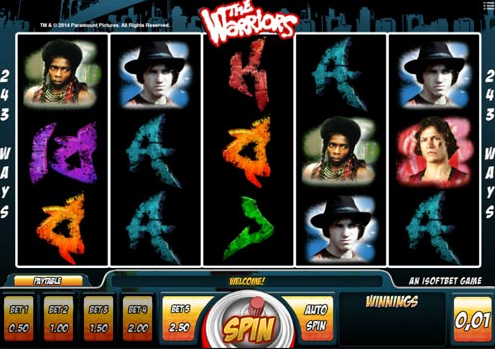 The Warriors will go wild when they are united. This is good news as it will trigger the Wild Warrior Bonus when a bonus symbol appears on reel 2 to 5. The wild symbols will substitute all base symbols in the game and all winning lies which contain a wild pay double prizes.

Make sure to keep your eyes peeled for the Bonus symbols as when they appear on reels 1, 3 and 5 it will trigger the Warrior bonus. When the Warrior bonus is triggered all prizes during paid spins can be multiplied up to 5 times. Additionally, you could also be awarded up to 50 free spins during which revealed symbols become stacked and all prizes which are received are given a multiplier between 2x and 5x worth.

This is a fantastic game to play as it has a great story to it and offers plenty of payouts alongside some cool bonus features. The Warriors slot game would suit fans of the movie which offers an interesting and fun experience. Slot games based on movies are rare which is what makes this on unique so if you’ve think you’ve got what it takes to be in gang member in New York give The Warriors a go. RTP 95%.

Another thrilling game to try is our Thunderstruck slot.