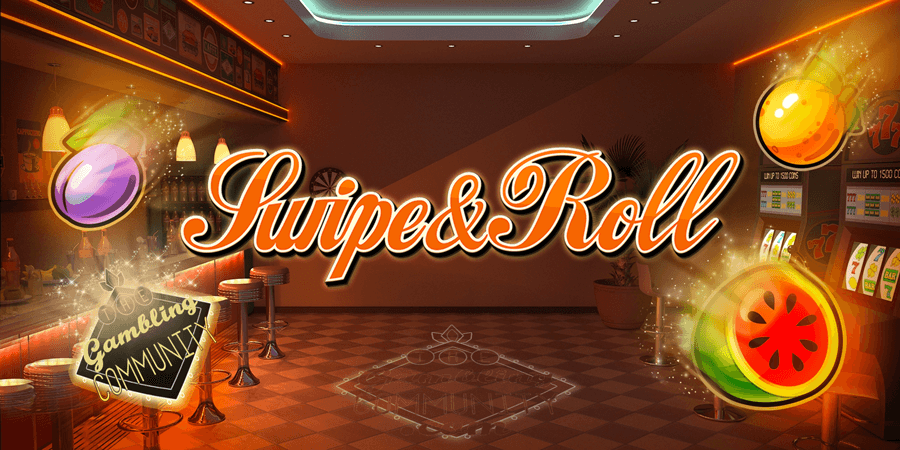 Swipe and Roll is a game from Swedish developer Net Entertainment. It offers five reels, three rows and 20 fixed paylines of entertainment to players. The game has a retro feel to it, with the graphics and symbols being reminiscent of some kind of 1960s style American ice cream parlour. We’ll take a closer look at Swipe and Roll here at the best slot sites, offering you plenty of detail about the game. You can also find out a little more about Net Entertainment.

Swipe and Roll has a distinctly vintage feel to it, with the graphics displaying a very traditional format to the reels which will be familiar to anyone who played fruit machines in the 1970s. The symbols on the reels also fit into this retro theme, with crisply rendered watermelons, oranges and plums all populating the reels as the higher value symbols. The letters Q, K and A are also used as the game’s lower value symbols.

The blue diamond functions as the game’s wild symbol, and there are two types to look out for. There is a standard wild and a x3 wild. This latter symbol only appears on the second, third and fourth reels, and it triples any wins that it is part of. Both wild symbols will substitute with all other symbols in the game to form winning combinations, apart from the scatter symbol. The scatter symbol is the bell.

There are three bonus features in the game. Coin Wheel occurs randomly during the base game, with the five reels turning into one large wheel to offer prizes. Wild Respin occurs when there are three of any wild symbols in view. The Swipe and Roll bonus game is triggered when three of the scatter symbols land on reels two, three or four during the Coin Wheel feature.

If you like slots deposit by phone bill, then this top-rated slots online is the ideal game for you.

Net Entertainment, more usually known as Net Ent, is a Swedish games developer with a long history. The roots of Net Ent date back to to 1963, when a company called AB Restaurang Rouletter was founded by Bill Lindwall and Rolf Lundström.

This company operated within the sphere of bricks and mortar casinos, and that experience was transferred into the digital gaming scene in 1996. That was when Bill Lindwall’s son Pontus founded Net Ent. Eleven years of growth saw the company floated on the Nasdaq OMX Stockholm Mid Cap, a stock exchange in Sweden.

Net Ent retains its premises in its home country of Sweden, but now also has offices on the Mediterranean island of Malta. The international scope of the company is shown by the fact that support is available for its products in 24 different languages.

Other NetEnt's best slots games include:

Check out other promotion slots from Net Ent.

Swipe and Roll offer up solid retro fun for anyone who enjoys playing slots online. The game’s graphics are crisply rendered, and an enjoyable soundtrack helps to create an immersive experience for players. Gameplay is slick and sharp, and the bonus features offer plenty of chances to win prizes. Its high quality is typical of Net Ent’s online casino games. Look out for Swipe and Roll in your favourite online UK casino! Join and play Shamans Dream too!