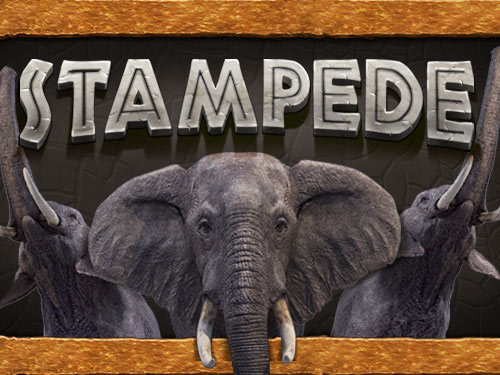 Stampede is a lucrative 5x3 reels slot with 1024 ways to win. Minimum bets at stampede are at £0.04 and maximum £200 per spin, while there is an autoplay option available which can free your hands!

The RTP at Stampede slot is 95.27%, while the volatility is at high levels. This means that you might have to wait for a while to get the actual return in ££ in this Betsoft slot game. Stampede free spins and multipliers are also at play, so keep reading to find out the full details of this unique slot!

The elephants are coming, and they are not happy – they want their tusks back! So, hide your pianos and jump into the back of the jeep to escape the chase, the deadly chase of the Stampede! The only way you can escape is by landing big on this safari-themed 5 reel game, designed to get your heart pumping! Start your journey by playing only the best online slots game on our site, Stampede slot.

Pay by mobile is also available on this one at Easy Slots, as well as mobile and mobile app gameplay!

Betsoft is a fairly new company in the scene of online gaming. Although in their infancy, the staff at Betsoft has almost 2 decades of experience in the online casino gaming industry. They are the young pioneers of platform-independent content delivery. They have a talent for creating unique, well-made online slot games, like Stampede slot, for those who want to play the best slot games on the go.

Stampede slot is one of their few titles that come with high volatility, unlike their other titles below:

Stampede is a 5-reel online video slots game with 243 pay lines. It is available to play on a variety of platforms, including desktops, mobiles and tablets. As the name suggests, the game is themed around an elephant, called Stampede.

However, there also other featured animals such as Horses, Rhinos, Elephants, Buffalo and Antelope - that take the form of the high paying symbols in Stampede slots game. The background is set in the African savanna. The savanna is a woodland and grassland ecosystem which is characterised by the unique wide spacing of the trees within the locale.

We found this game as exciting as an Africa safari trip! The illustrations of the animals are stunningly composed in Stampede. They have a realistic appearance and are comprised of bold colours, which are easy on the eyes. The symbols included on this game are the rapid cheetah, the lion: the king of all the animals, the noble buffalo and the pattern-balding eagle. These authentic African animals are beautifully designed.

The soundtrack is fantastic, the main theme is the exhilarating sound of the African drums! It made us want to dance!

How to Play Stampede Slot Game

Before the first bet on Stampede, the player must set their wager using the up and down arrows. This sets the coin value from 0.01 to 2. For busy gamers, the game has an “Autoplay” feature. This particular feature allows the game to continue automatically for a number of spins predetermined by the player. Although, we would recommend not missing out on this engaging gaming experience. (Think of the artwork and the music that is going to waste if you autoplay!) The symbol for this feature is the two arrows which circle each other. 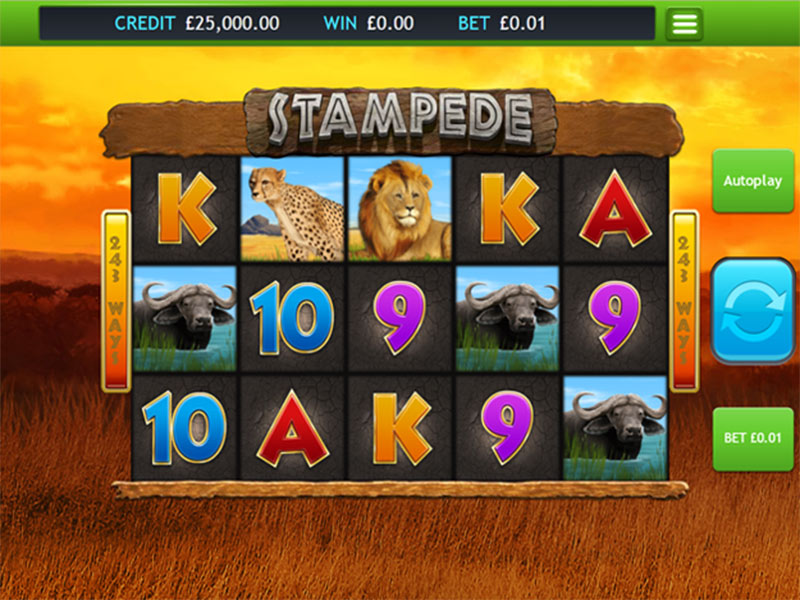 In order to set the reels in motion, the player must hit the “Play” button in the Stampede base screen. The game's Wild Symbol is represented by the game's logo and can replace any and all symbols in the game excluding the Scatter Symbol. The Stampede Scatter Symbol Is represented by the golden “Bonus” coin symbol and can appear on reels 2, 3 and 4. When the player lands 3 or more of these symbols, they will trigger the Free Spins Feature.

The Verdict on Stampede Slots

Like an elephant, we will never forget the iconic online casino slot game, Stampede. It is an extremely well-made slot game that presents the African safari aesthetic beautifully. Its unique Cash Stampede feature brings a fresh experience to even the most seasoned slots player.

The game has a high RTP (Return To Player) of 95.27%, making the game low risk, and friendly to beginners. The lack of ability to select the number of active pay lines adds to the simplicity of the game. The overall layout of the Stampede base game is clear and it runs smoothly on all platforms.