No need to pack your bags, Pragmatic Play is bringing Vegas to you with this live casino themed online and mobile game, Joker’s Jewels slot. This 5-reel casino slot has 5 pay lines and a return to player of 96.50%. Join the fun and see if you can get your hands on some of the Joker’s Jewels.

This best online slot game is full of jaunty fun and carnival-style audio and takes us to the casino floor. The reels are exactly like a real slot machine and feature attractive images and vibrant graphics. The reels are set to the outline of the casino machine and there are deep blues and purples creating a soothing and relaxed tone as you enjoy spinning and imagine you are in the Bellagio. The images and symbols on the reels are crisp and bright, including the joker himself, a mandolin, a crystal ball, joker’s shoes, a bonus crown and those all-important shining jewels. The symbols flash along the top reminding us just how much we could stand to win. If you can’t wait to get your hands on some of those Joker's Jewels, head to easyslots.com now and play for real cash prizes.

Pragmatic Play is one of the fresh faces in the top online slot games industry, having launched in just 2015 but they have already created some alluring and entertaining slot games. This Malta-based company are working hard to spread their influence and provide top class gaming to players worldwide. Considered one of the fasted growing companies in the igaming industry, it is fair to say that the company has made a splash in the short period of time they have been operational.  The so-called ‘splash’ is a result of the large collection of HTML5 games, which is argued to offer something every player.

Based in the tranquil village of Sliema in Morlta it’s not just the Pragmatic play headquarters which is considered red hot. Since all of the games developed by the company incorporate the latest in graphic design and gameplay features, it’s no wonder they are loved by players and critics alike. This was made obvious after Pragmatic Play won multiple in 2017. The company beat some of the best-off competition around to win the Software Rising Star category at the EGR B2B Awards. Soon after the Malta iGaming Excellence Awards came knocking, resulting in the company winning the Best Digital Company of the Year, Best Gamified Experience Company and Best HR Director of the Year. It has to be mentioned the near misses of the EGR Operator Awards in which Pragmatic Play was shortlisted for Game of the Year.

The 100+ team who built the company from the ground up can be highly credit for the rewards they have received. The fan base which has been built for Pragmatic play is just another example of the overall popularity for this igaming specialist. If you loved to play Joker’s Jewels, check out some other Pragmatic Play titles such as 3 Kingdoms: Battle of the Red Cliffs, 7 Piggies or 8 Dragons now!

Pragmatic Play have kept it very simple in terms of how to play this online slot game, and bonus features. They have stayed true to the live casino slot theme of the game and therefore the game works in a very similar manner to the land-based slots. A classic twist on a traditional slot is rarely done in the igaming industry, which is why this game is a rarity. Bright, bold and exuberant is an understatement when describing this traditional 5-reel slot format.

As mentioned, this slot is developed by one of the best in the business. Pragmatic Play has designed countless top-quality slot games on a regular basis and Joker jewels is no exception.

The employees are not far off from being named as legends within the igaming scene. Subsequently they have been able to build a network across the over the world from their headquarters in Malta. The network which has been developed has enabled the company to go above on beyond in creating exclusively themed games which are available to play on mobile devices at Easy Slots.

Let’s take a look at what the game offers and how it works:

There is one bonus available in this game and it comes in the form of a bonus crown. All wins which involve the bonus crown will be multiplied but the total bet and 5 of these coins will payout 62.50 coins.

The highest paying symbol on the board and one to keep an eye out for if you really hope to win big is the joker. 5 of these on the reels will award the player with a generous 250 coins. The mandolin and bowling pins are two more high payers worth keeping an eye on.

The gang here at Easy Slots are super excited to feature Joker Jewel’s, Why? Because this slot mirrors any land-based slot machine which has become renounced in the bright lights of Las Vegas.  Although this could be considered as simplistic, you couldn’t be more wrong! These 5 reels each with 3 rows, has twists and turns around every corner in the form regular winning pay lines. We believe your just love the rich mauve and blue background which flows perfectly tied into the flashing slot game. 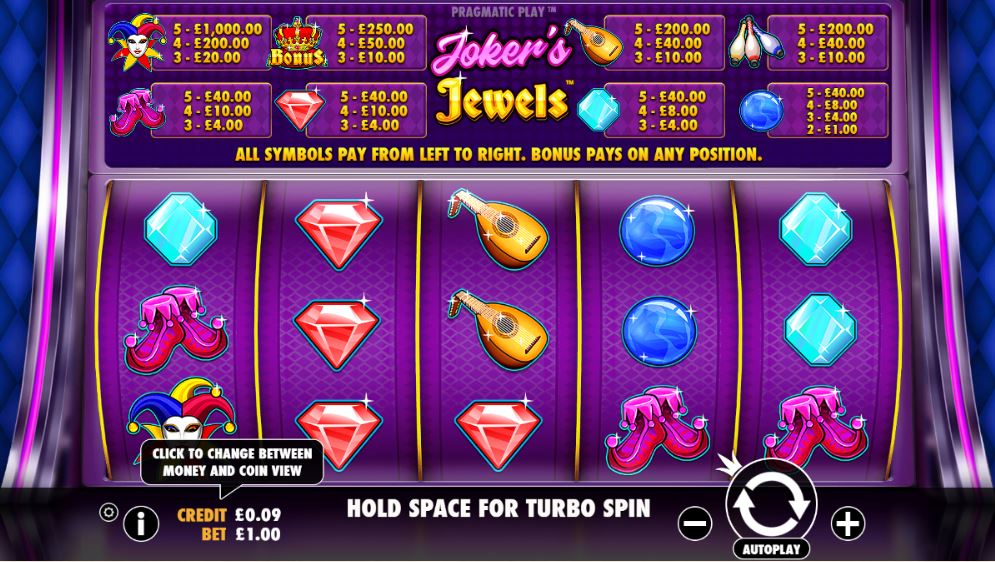 While this game is very simplistic in nature, it has a modern, crisp design that is inviting and players who crave the classic slot style will fall in love immediately. If you love the classic style
slot game and want to find some more, we recommend checking out Archangels Salvation