Great Rhino is a wonderful new best slots online game, ever fancied visiting the African savannahs, well now you can! So, pack your bags, gear up and prepare yourself for a wild adventure.  In amongst the remarkable beauty of the African themed slot, there is a chance to win some pretty wild cash prizes, which is never bad.

The great wide open spaces of Africa are opening up to us, coming into our homes from across our devices, all neatly packaged inside a 3x5 game machine. Great Rhino is a stunning way to ‘see the sights’ without having to pay for the flights, and you’ll be much safer when playing from home.

Themed around the famous African lands that are filled with famously majestic African which are brought to life by this fantastic slot game. Although in the wild animals could be considered as dangerous, but in this isn’t the case in Wild Rhino. As a player must sit back and relax when encountering animals on your journey, charge towards greatness in the form of magnificent rewards.

Don’t wait about, grab and don’t let go of the greatness, succeed by becoming the king of the African planes by trying your hand at Great Rhino.

Sporting a colourful interface, coated in rich reds and burnt oranges, Pragmatic Play has done a fine job of adding texture to this game. The graphics may not be the most polished we’ve seen, but the 5 reels and 20 win lines are more than attractive enough for such a modern title.

Great Rhino is developed by Pragmatic Play, if you are not already aware this company is among the leaders in the online casino community. Pragmatic Play reputation is built on fan favourite games. What's more, detailed graphics and some smart bonus features make for a very slickly produced game which is no surprise.

Great Rhino is just one of over 80 top online slot games that they have developed, with a range of themes it is no wonder Pragmatic play has so many loyal fans. What makes Pragmatic Play stand out most from its competitors, is that the company doesn’t simply bombard us with amazing graphics and then no substance. Instead, they try to balance the two out, a fine dynamic that has ensured their continued growth since their founding in 2015.

Pragmatic Play underlying passion for premium entertainment is unrivalled. The company continuously strives to create the most engaging and evocative experience for customers across all range of games, including slots and bingo. What’s more, their multi-award-winning slots portfolio contains unique in-house content, whilst constantly strives to provide 99.99% uptime of their services.

Pragmatic Play constantly monitor and track game performance and continuously optimize to provide the best gaming experience for players irrespective of their location and geography. And you can easily find more of their Great Rhino slots here at Easy Slots, like the Great Rhino MegaWays slot and Great Rhino Deluxe.

Based in Malta, they’re at the heart of the iGaming scene, therefore allowing them to create a series of games well suited to the diversity of the market. This shines through in the way they develop their bonus features, which often function across a multiple screen platform; such is their expertise that they’re now one of the fastest-growing brands of our time.

If you prefer betting on slots pay with phone bill, then Easy Slots uk site is the best casino for you. And we can also offer you more Rhino themed slots, have a look at the following games: 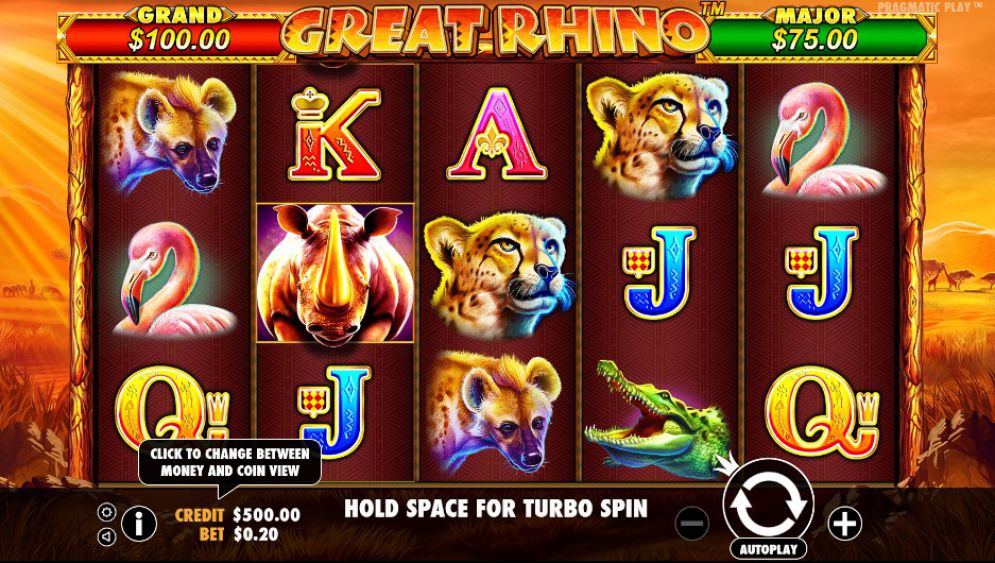 One of the key features of this title is that it can be cheap and cheerful, should you wish to save your pennies; simply decide how many coins you want to be played on each line, as well as their value, and you can begin. That simple act gets you to access to the standard paytable, but also two bonus features: the respins and free spins.

Although this wonderous rhino and his friends aren’t going to shower you with wads of cash, the returns can be quite high, provided you wager more money. The higher your stakes, the more the paytable increases its value; this is one for the high rollers, who not only want to see animals in their natural habitat but want to hunt out great wins as well.

* Super Respins: The rhino symbol is the key to this feature, with you needing to get two stacks of them to enter into the round. Although not an easy feat, once that’s achieved you’ll get three respins, with the chance to unlock the Major Jackpot at the end of this mini-game.

* Free Spins: Only available on reels two, three and four, this bonus is a little tricky to get but worth it once you nail it. Get three of the bonus icon to activate 10 bonus spins, with the rhino becoming a wild during this time. 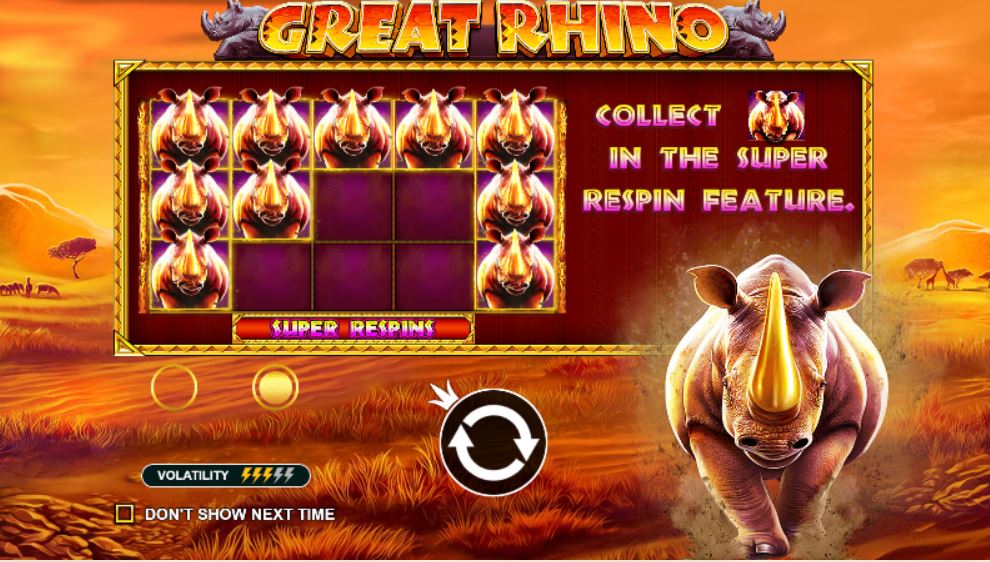 This isn’t a game bursting at the seams with features, but it’s nonetheless easy to access, promises reasonable wins, and looks great. Pragmatic Play has developed a fine game for the masses, though don’t be fooled by appearances, as the volatility is still rather high here, with the RTP said to be 96.53%. If you enjoyed Great Rhino why not try Silver Lioness 4x slot