Hey you. Yes, you! The guy in the long overcoat, copper goggles and a top hat. There is only one of you! Visit the Steampunk future in Fortunium. This is a 5-reel, 40 pay line slot by Microgaming. Fortunium has a futuristic steampunk-themed game which already has the entire industry talking! This unique title is filled with lots of trinkets and treasures just waiting to be discovered. You'll join Maximillian and Victoria as they travel around the city. They are on the lookout for bits and bobs, and most of all gold! This comes with some great features including a win booster, mystery reels, and free spins. Make sure to try the best online slots from Easy! 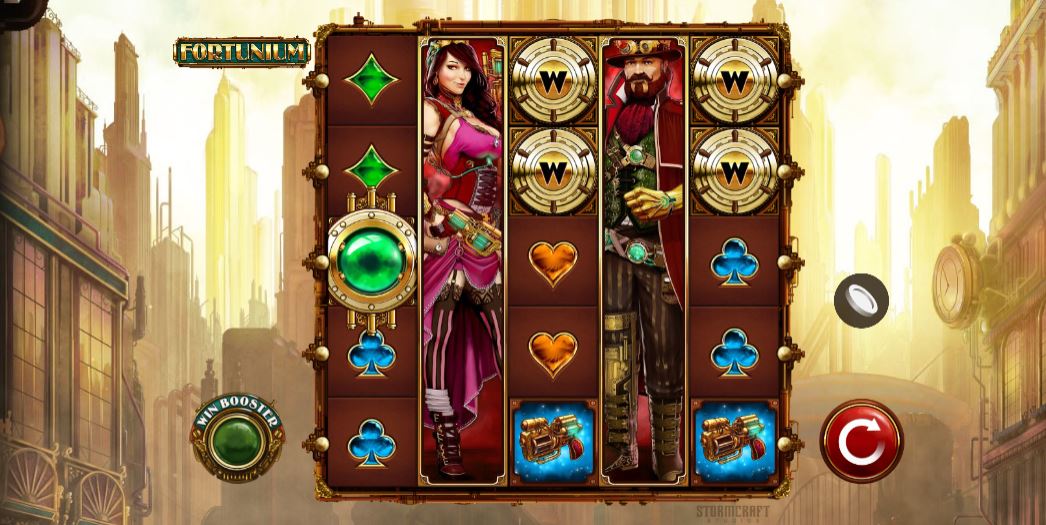 Microgaming is an award-winning online casino operator. These iGaming giants are considered to have been the world's first true online casino. They have been creating a variety of different games titles. Since 1994, they have created poker games, to sportsbooks to land-based to quickfire and even live dealer games. Microgaming has one of the biggest progressive jackpots in the world. So much so that they have even won a Guinness World Record for the 'largest jackpot payout in a play top free slot games. This jackpot was given out in Mega Moolah and it was for €18,915,872.81 (£17,000,167.79).

Microgaming has over 100 titles and launches several new and exciting games every month. They have created games using an exciting range of themes. Including animal, sports, and Irish-luck themes. Their slots are original games with a unique style of graphics and thrilling concepts. Many take on a narrative-driven take on slot gaming. This is what makes their games so unique and re-playable. If you enjoyed Fortunium, why not check out these Microgaming titles?

- Reel Talent, Can you get that golden buzzer and pass though the Reel Talent tournament?

- Book of Oz, Follow that yellow brick road to the Land of Big Bucks.

- Wicked Tales Dark Red, The evil and twisted slots you cannot escape from.

Clink, clonk bang! This game was magnificent from beginning to end! A copper-coated masterpiece. Fortunium is a 5 reel, 40 pay line slot created by Microgaming with a steampunk theme. You'll take a peek inside the wonderful world of Steampunks. So, whether you are a dieselpunk, vicorigoth, airpunk or a steamdork, you will love this game! In Fortunium, everything looks Victorian, but with a groovy modern twist! We loved the giant skyscrapers, clock towers and bronze pavements. Make sure to follow Maximillian and Victoria as they know where all of the best treasures in the city can be found.

Steampunk began as a subgenre of science fiction. The word steampunk began as a jokey reference to the term ‘cyber-punk’. Although this term was first used in the nineteen-eighties, works of fiction prior to this date have been described as steampunk texts. Steampunk texts often show an alternative futuristic reality. This future depicts a mix of modern technology and Victorian style. Steampunk texts include works by H. G. Wells, Philip Pullman and China Mieville. Today, there is a large community of steampunks fans who often enjoy dressing up in the iconic steampunk garments and sharing stories and artwork they have created.

The design is able to be both retro and modern simultaneously, with the steampunk theme. We loved the designs of the characters, especially their beautiful outfits. More specifically, Max's long overcoat, and top hat. Symbols include the two characters Maximillian and Victoria. There are also some fascinating futuristic weapons and treasure chests filled with gold coins. We could not get enough of the ray-gun blaster!

We loved following the narrative of Fortininum and being accompanied by Max and Victoria. They are pleasant, loveable characters, who lead you through the game. The art style is extremely similar to the figures and faces you might see in Japanese manga.

The Wild Symbol - The wild symbol is the golden circle. This replaces all other symbols apart from the bonus symbols to form winning combinations.

Win Booster - Activate the win booster by doubling your bet. Activating this feature will remove all low paying symbols from the mystery symbols feature. This will reward you with even bigger and better prizes.

Free Spins Feature - Landing 3, 4 or 5 scatter symbols will unlock the free spins feature. Here you will be awarded 10 free spins. For every additional scatter gained, you'll receive another free spin. Up to 3 mystery reels can be active during this feature.

If you want to make the most out of this slot and receive the biggest wins, you'll need to activate the win booster. This feature replaces all low paying symbols with higher-paying ones. We loved this particular feature more than any others

If you fancy to pay with phone credit slot, then this online game is ideal for you. 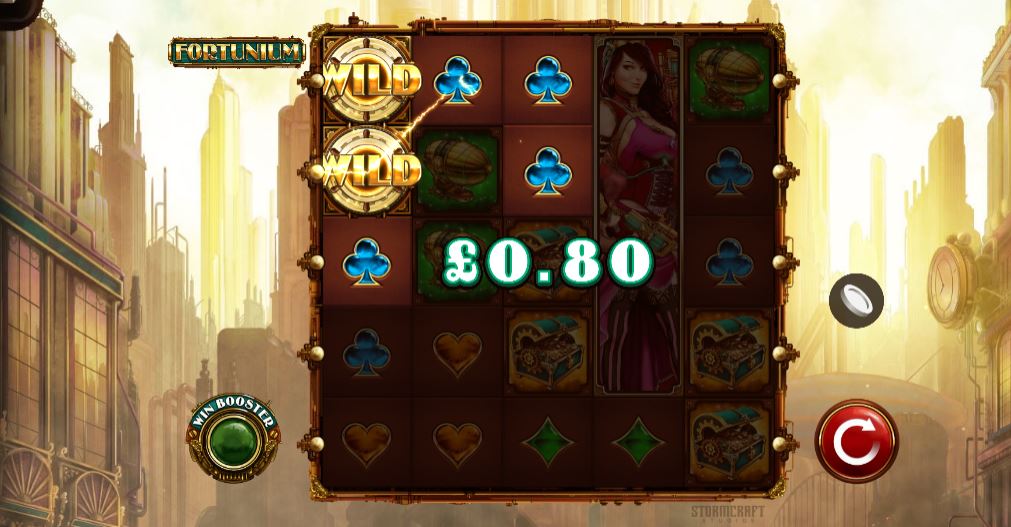 Fortunium is an exciting slot with a unique steampunk theme. The graphics are futuristic and colourful, and the modern soundtrack goes with the theme perfectly. It is not just a pretty face, Fortunium also contains great gameplay. It is packed full of bonuses and features. This makes the game extremely fast-paced and exciting. You will never know what is just around the corner. If you enjoy this game, why not try God of Wild Sea?