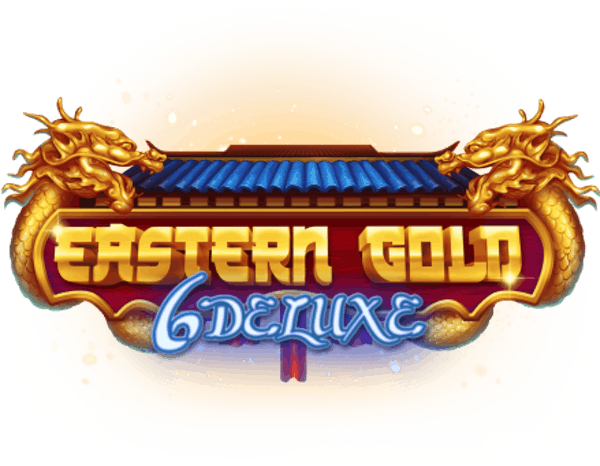 Eastern Gold Deluxe is a slots uk from Gamevy with an RTP of 95% and is played on a 6X3 reel grid with five paylines. I discovered that I could bet from 5p up to £20 per spin and that the game had low to medium volatility.

The top prize on offer is 5000 coins, which you can win via a tasty jackpot feature. The free spins bonus also provided me with plenty of entertainment, and the giant symbols were certainly an intriguing extra touch. Read on to find out what else I can tell you about the Eastern Gold Deluxe slot’s Chinese-themed action!

The Eastern Gold Deluxe slot is another game that explores Chinese culture's richness. As a result, its graphics have a luxurious East Asian feel to them, with plenty of rich shades of gold and blue on the screen. The reels look to be held up on the side of a pagoda, with an evening sky behind them.

The higher value symbols on the reels are associated with the game's Asian theme. I saw a Chinese emperor, a koi carp and a paper lantern. The lower value symbols are the usual array of numbers and letters, only given something of Chinese twist in their appearance.

How to Play the Eastern Gold Deluxe Slot

My first step towards playing the Eastern Gold Deluxe slot was to open an account at Easy Slots. I headed over to the Easy Slots homepage and followed these steps.

When your account balance shows your first deposit, you can play the Eastern Gold Deluxe slot for real money. First, find the game on the Easy Slots lobby page, where all the games are displayed. Click on the game to open it up, and then follow these steps.

If you’re a similar type of slots gamer to me, you’ll appreciate having some hard facts about the Eastern Gold Deluxe slot to hand before you dive into playing it. Here are some of the key numbers about the game for you.

I found that I could bet from 5p up to £20 per spin, so the slot is suitable for beginners and high rollers. I thought the RTP of 95% was on the low side for a slot like Eastern Gold Deluxe, but the low to medium volatility meant that I enjoyed frequent smaller wins as I played, though larger wins were somewhat rarer. This Gamevys slot is another game that uses China as its setting, and there is a jackpot feature that allows you to win the maximum possible prize of 5000 coins. I’ll explain more about the jackpot feature and the game’s other bonuses next.

I discovered three bonus features in the Eastern Gold Deluxe slot. You can find out more about them here.

The Eastern Gold Deluxe slot's main bonus feature is the free spins feature. This is triggered when the golden dragon scatter symbols appear at least three times on the reels. The number of spins you receive depends on the number of scatters.

Some of the symbols will also be bigger during the free spins than usual.

During the free spins bonus in the Eastern Gold deluxe game, one of the standard symbols is selected to expand in size during each spin. This symbol will appear as a 3x3 icon, filling up the second, third and fourth reels. This helped me win a few significant prizes when I played the slot.

The way to collect the Eastern Gold Deluxe slot's biggest prize is to collect symbols that are either framed in gold or sparkling with gold. Every time one of these symbols appears on the reels, they'll contribute to a meter on the screen's left side. If you fill the meter to the top, then you'll collect the 5000x stake top jackpot prize! The meter resets between spins, though, so winning the jackpot is not as easy as it sounds!

Verdict on this Slot

*All values (Bet Levels, Maximum Wins etc.) mentioned in relation to this slot game are subject to change at any time.