Disco Double top online slots game will transport you back to the wonderful heyday of Disco in 1970s New York where the nightlife scene was filled with groovy beats, platform boots, and disco balls. The party would never end, the Beegees reigned supreme until the decline of Disco in the 1980s spawned a new era of music, but Disco Double would live on forever.

iSoftBet has been in the market for quite a while now developing an array of slot and table games that really push the boundaries of what a 5 star online slot games can be. If you’ve ever wondered who the creators are behind some of those branded slots that you just can’t get enough of come from you should know it’s iSoftBet. Purveyors of technologically advanced immersive slot games, this outfit has created games like Paranormal Activity and Platoon and works with many movie franchises to develop the latest cinematic releases.

If you want to know about EasySlots promotions then click here to read more.

Immerse yourself in the fast-paced world of disco culture and play this glittering 5 reel slot game. Disco seems to come in and out of the slot playing and cultural stratospheres and there’s been many disco themed games that have seemed to fall at the first hurdle. In this respect you can be sure to understand that Disco Double has double the fun, double the atmosphere, and double the groove.

When you begin to play through the reels you will be greeted with a deep purple background that houses the deep purple online slot reels. In addition to this, the game features some lovely bubble effects, flashing lights, and mesmerising lens flares. This game offers an exciting range of betting structures that are perfect for a whole range of players including both the minnows and the high-rollers.

Disco Double has the standard 5 reel, 20 payline structure with the object of the game to match symbols across paylines with three types of bars; single, double and triple. There’s also a range of different coloured sevens that add a lick of colour to the proceedings. As far as slot games go, this is a simplistic one, but the vibrancy of this slot is certainly where the boxes will be ticked.

Deposit by mobile and play this game now at Easy Slots. 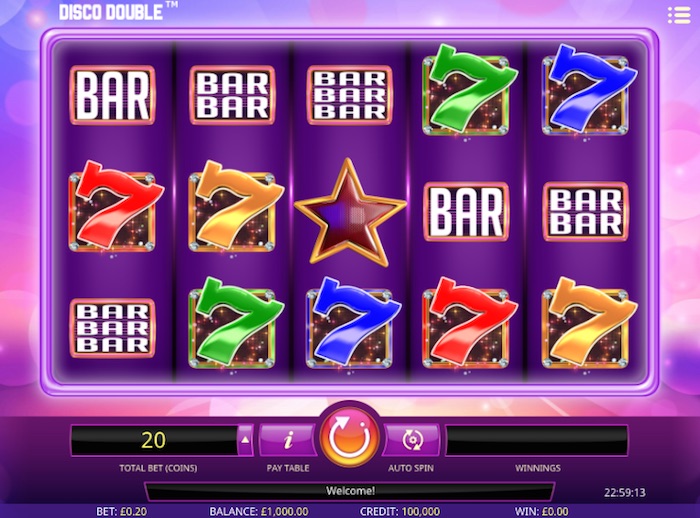 The Wild Symbol can be substituted for any normal symbol on the game to create opportunities for winning paylines. In addition, keep a look out for the scatter symbols as this is where you’re going to find your free spins. The more scatters and wilds you locate, the more cash prizes and free spins that you will achieve.

Match enough SCATTERS and you’ll work your way onto the free spins round where you’ll be gifted a generous 10 free spins. In this bonus round keep a look out for the special mirrored glitter ball that acts as a bonus WILD that MULTIPLIES your winnings significantly.

Disco Double is a mesmerising slot game by iSoftBet, they’ve done a great job at keeping the simplicity of the 5 reel while incorporating a very affable slot theme. The disco theme provides the lights and excitement and the free spins round provides the rest. Disco Double is a brand new game to the Wizard Slots platform, be sure to check out DISCO DISCO if you’re a fan of this casino game.

Another top game to try is our Lion Dance slot.