Here's a superb new game by Yggdrasil. Okay, we all hate catching a virus being tucked up in bed with medication, comfort foods and drinks with regular trips to the doctors. That uncomfortable feeling of knowing that you are unable to do a single thing about it apart from lying still and feel sorry for yourself as you wonder with worry about the next time you’re going to be sick.

Well, as mad as it sounds Cyrus is the virus that you will most certainly want to catch and when you do, it’s not the easiest bug to sake off let me tell you because Yggdrasil has brought you a five-reel slot, with an intriguing 10 pay-lines with five paying from the right of the grid. Don't miss the chance to play the best online slot games here at Easy!

Yggdrasil is like that really intelligent sibling who is so much better than you at everything, founded in 2013 Yggdrasil burst onto the scene and have spread like germs ever since. Their innovative ideas and creative approach to the online gaming market has truly thrown the cat amongst the pigeons in the sense that even more established developers at the time were looking over their shoulder as Yggdrasil began to shake up the market with their new ideas.

Games such as Joker Millions and Valley of the gods were instrumental in the developers receiving several awards at The International Gaming Awards back in 2017, with one of those awards being the Innovator of the Year.

Why not try this top-rated game on a pay by mobile slots site uk like Easy Slots? 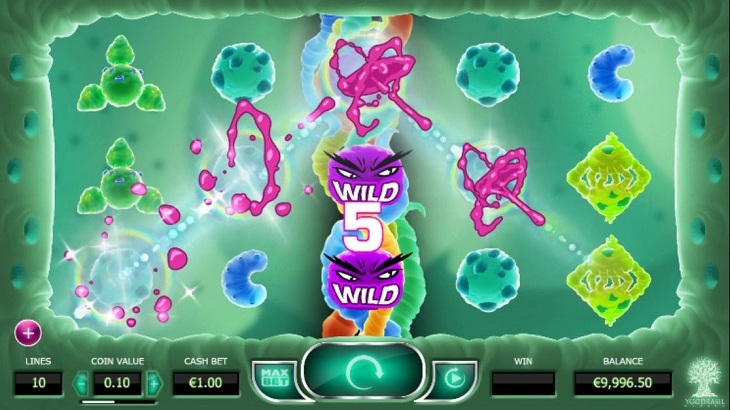 The game has a relative setting of a petri dish which contains the various bacteria symbols, all representing a different form of bacteria which isn’t really appealing to the eye. However, these disgusting symbols could net you some unbelievable cash prizes which makes them not so bad after all. So, if you can bare yourself to look keep an eye out for the miniature blue bug as this will guarantee you 2000 five-of-a-kind coins.

The gameplay runs smooth and efficiently with the award-winning Yggdrasil software to assure players they have no problems in enjoying the speed of the game as well as the variety of sound effects that bring the game together.

Reel Mechanics: This is a very traditional five-reel slot, however, Yggdrasil have put their own little twist on this game by making five of the then pau-lines pay-out from the right to left. Which only increases the excitement and increases the anticipation of what to expect from the middle reel.

Expanding Wilds/Re-Spin: The Expanding Wilds with Re-Spin can be activated if a wild symbol falls on the third reel. Watch out for the infection as it smothers the reels transforming the symbols to Wilds. Not all the best games are online slots with free spins!

The great thing about this virus is that it’s so contagious it can spread over all platforms meaning you can enjoy this game on mobile devices such as iOS and Android as well as on your standard computer desktop. 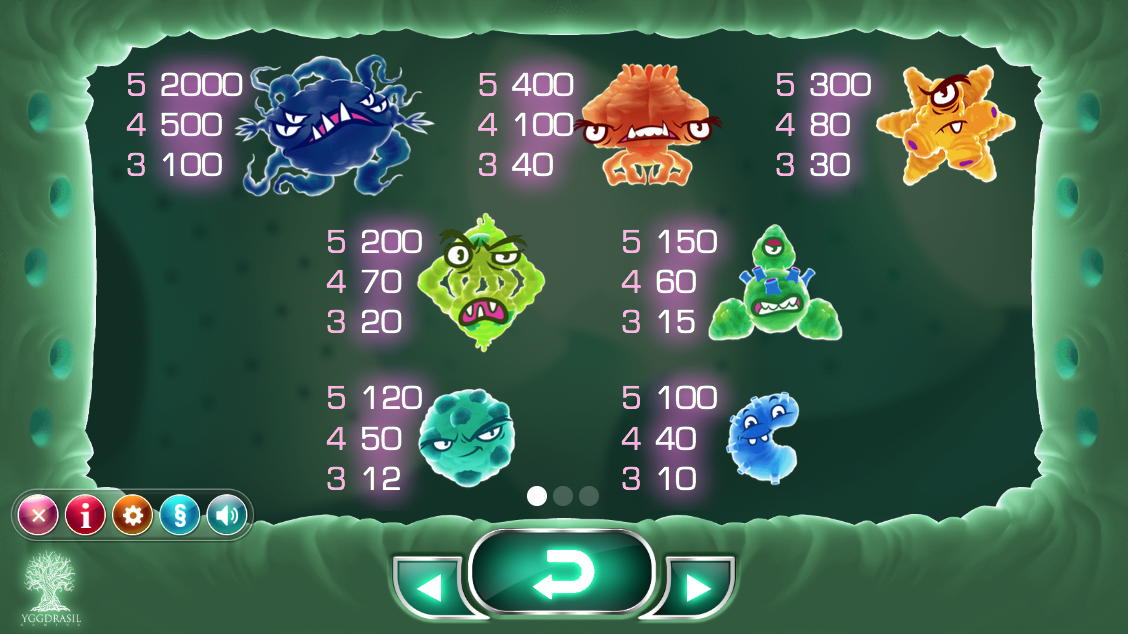 It’s safe to say that the theme of this game would strike many as an unusual concept however the Yggdrasil creation certainly won’t come across as unusual to those who have enjoyed playing it. The game includes some fantastic bonus features that emphasize what Yggdrasil are all about, solid gameplay with a creative theme is what we always expect from the highly regarded developers.

If you enjoyed Cyrus the Virus you may also like more of our best payout slot games online to play today! If you don’t think this is the right game for you, then why not play White Wizard?