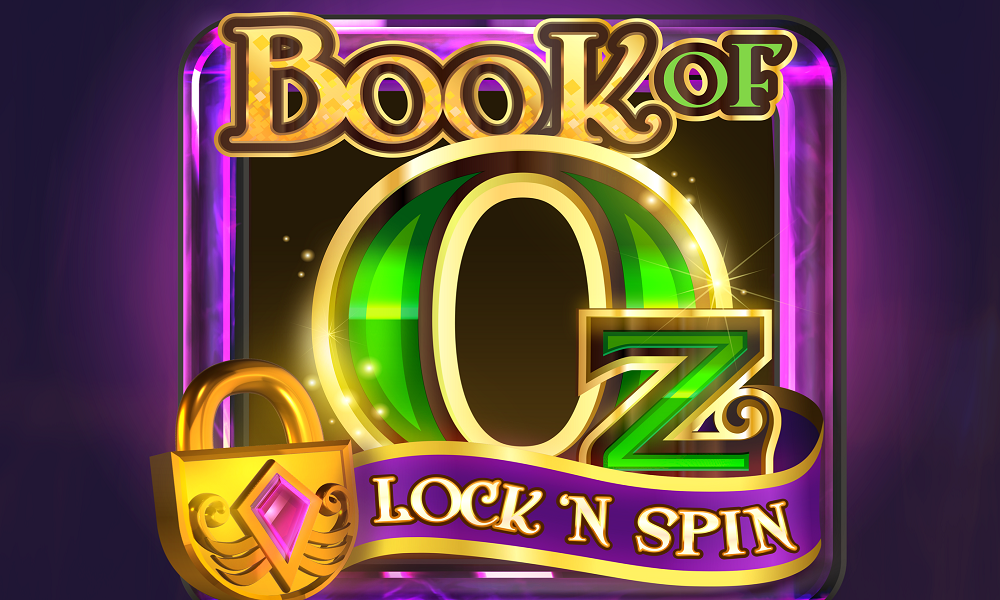 We can tell you now that this might be the best sequel to a slot we’ve played in quite a long time! Microgaming is putting us back on the path of the yellow brick road, one that takes a left turn of sorts for your gaming pleasure! The original Book of Oz game is believed by many to be one of the best games in their arsenal, which is probably why they created the slot we’re reviewing today, that being Book of Oz Lock N Spin.

Book of Oz Lock N Spin is playable from as little as 10p up to £25 which will definitely appeal to a wide array of punters out there of varying playstyles. The original Book of Oz was a 5 reel by 10 payline game, and the Lock N Spin version follows the same route. We would be remised if we didn’t mention that this game is mobile compatible! The best slots are mobile compatible. They allow you to play on-the-go! Be sure to check out the rest of the review to learn more!

One of the longest-running developers to date, allow us to introduce to you the legend known only as Microgaming! Opening their doors in 1994, Microgaming made it cool to be a slot machine developer long before it was cool, a name responsible for hundreds of gaming experiences. Back in the day, these guys worked hard to bring you games that would require a quick download — nowadays you can just pick up your phone and spin.

If you spin slots on a regular basis then you have no doubt heard of names such as Immortal Romance, Thunderstruck, Avalon II and the iconic Mega Moolah — well you can add Book of Oz Lock N Spin to that list because we’ve got a good feeling that it is next in line for big things! Consider these guys pioneers of one of the largest industries in the world. Check out the following games to keep the good times rolling: 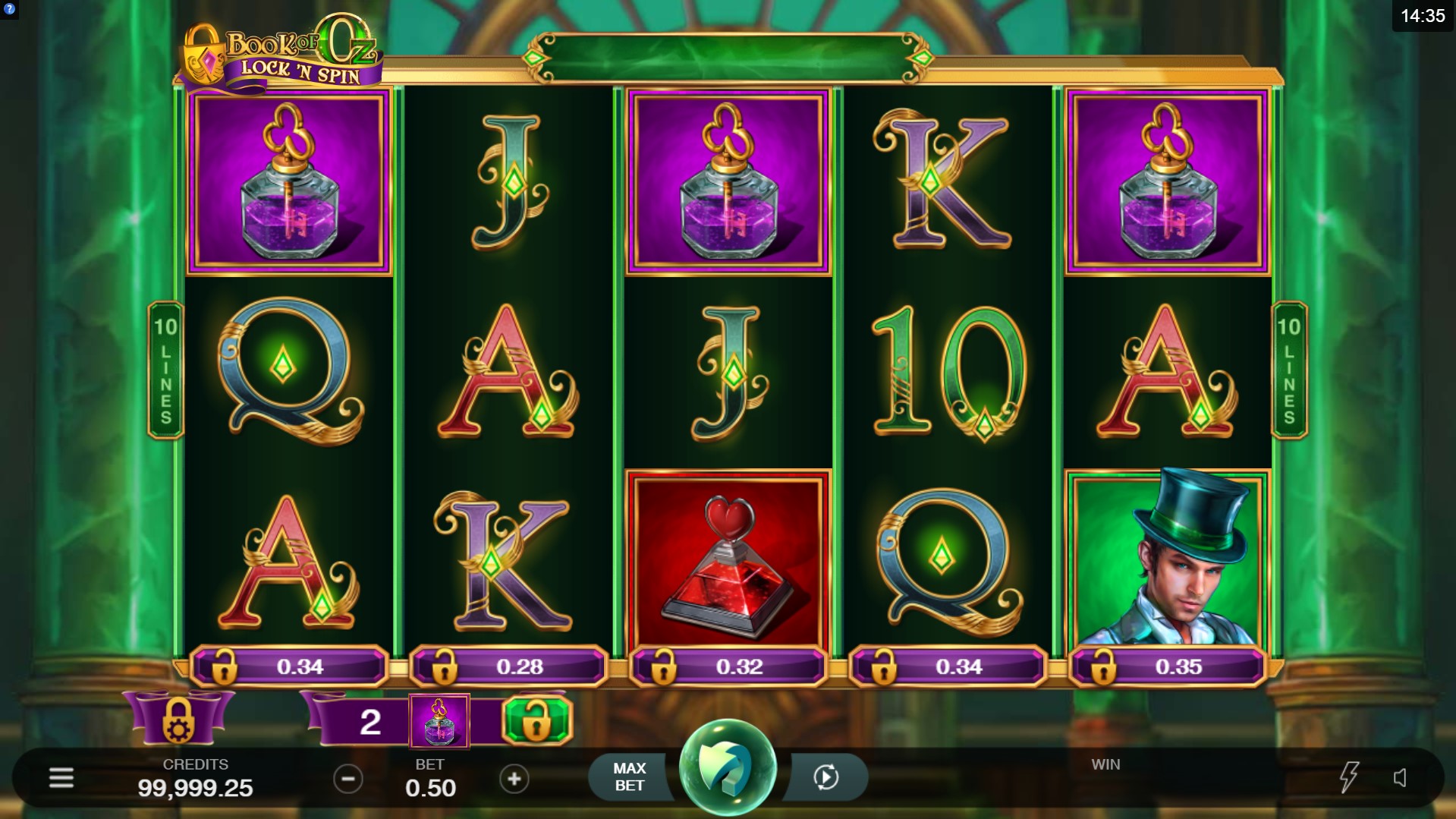 If you happen to be a big fan of the golden age of cinema, then you should have already deduced that this is a slot based on the Wizard of Oz, a movie that is still believed to be one of the greatest movies to have ever existed in certain circles. Did you know that the original Book of Oz broke records? It’s true, attracting a massive crop of players who still play now! Turns out the Emerald City is full of surprises just waiting for you to uncover!

To get things moving in Book of Oz Lock N Spin, you will first need to select a starting bet of some kind, something that you can set very easily using the arrow keys at the bottom of the screen. Using the left arrow will decrease your bet, and the right side will increase it. Oz looks fondly on those who spin with a higher bet — meaning you earn more money for successful spins on a higher bet — so be sure to choose wisely at the start of every round!

Players who have experienced Book of Oz in the past will recognise almost instantly that this is exactly the same game outside of a few additions/tweaks — try not to let this get the better of you as there is a lot to enjoy here! In terms of visuals, purples and greens are used a lot here, the same colours that evoke similar feelings when watching the film. Speaking of the movie, as you play you’ll notice there are various easter eggs paving the way here, some of which can be seen through the symbols you match themselves, imagine that! This game has some of the best bonuses.

Like the original, on the reels here you’ll find a mix of low and high-value symbols, each offering something different as far as scores go. All low-value symbols in Book of Oz Lock N Spin appear as various playing card suits (A, K, Q and J cards can be found with every passing spin). The high-value symbols in Book of Oz Lock N Spin should be the desired goal if you care about making money in this game, consider the requests made directly to the almighty Oz himself!

Symbols in Book of Oz Lock N Spin take the shape of various icons, the same icons that relate to the story of Oz in some way or other. Everything is washed in a shade of green in this slot, but telling the difference between certain symbols is still relatively easy. Finding Oz should be everyone's top priority, this symbol will net you 500x your stake if you can find five of him in the same line!

Wild symbols are some of the most common of all symbols, and matching them will cause most icons on the reels to be replaced by other valuable symbols as a result! In other words, match wilds to substitute bad symbols for the better ones! Scatter icons are unlocked whenever you are matching the wilds, and matching the scatter icons lead you to free spins off the back of that — and if you have played any Microgaming slot in the past then you will know of the importance of those!

The Lock N Spin aspect of this version of Book of Oz gives you more power in how you like to play/form winning lines. This feature allows you to lock reels as you spin, thus allowing you to form bigger wins by proxy. Know that every reel you lock will cost something else to lock — that’s right, you have to pay to lock! 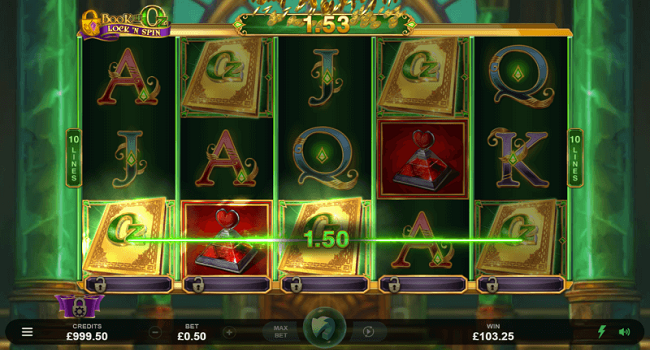 There will be those out there questioning what this version of Book of Oz does to warrant their attention, but to that, we say: “pay no attention to the man behind the curtain” — or in other words, ignore them! Book of Oz Lock N Spin is a fantastic variation of the original, adding enough to change the way you approach the game outright, play now! One of the best slots games we've ever played!

Pay by mobile slots like this one are a must play. Try it today!