A pretty standard reel setup as the world of online slots goes is the five reel, three row setup that we see here again in Microgaming’s slot Aliya’s Wishes one of the best slots to play here at Easy Slots.

We’re revisiting the world of Aladdin here through the eyes of a new character, Aliya so see if you can get here to grant your wishes, which we would imagine are the jackpot. In this slot, that figure is 3715.3x your stake, a pretty generous offering that we’ve just come to expect from Microgaming over the years.

To achieve that jackpot you can put down anywhere between 10p and £60, and you can do that on any device whether you’re on the go or at home. Make sure you do that at the best slots sites though, and get involved at Easy Slots where you can try some of our slots games today.

About Microgaming - the Developers of Aliya's Wishes

It seems to be the case that a lot of the games we play these days come from the online slots development giants Micrograming, either solo or in collaboration with smaller outfits that they have become so famous for scouting out and assisting in developing.

Since their formation all of 26 years ago in 1994, Microgaming have produced some of the best online slots in the world, either solo or in conjunction with others, including:

Fast-flowing, beautiful graphics, excellent payout potential and fascinating themes are just some of the things that Microgaming one of the best slots developers of all time, so you can Aliya’s Wishes at Easy Slots safe in the knowledge you’re in good hands on both the development side of things and in that you’re paying through the best slots sites. 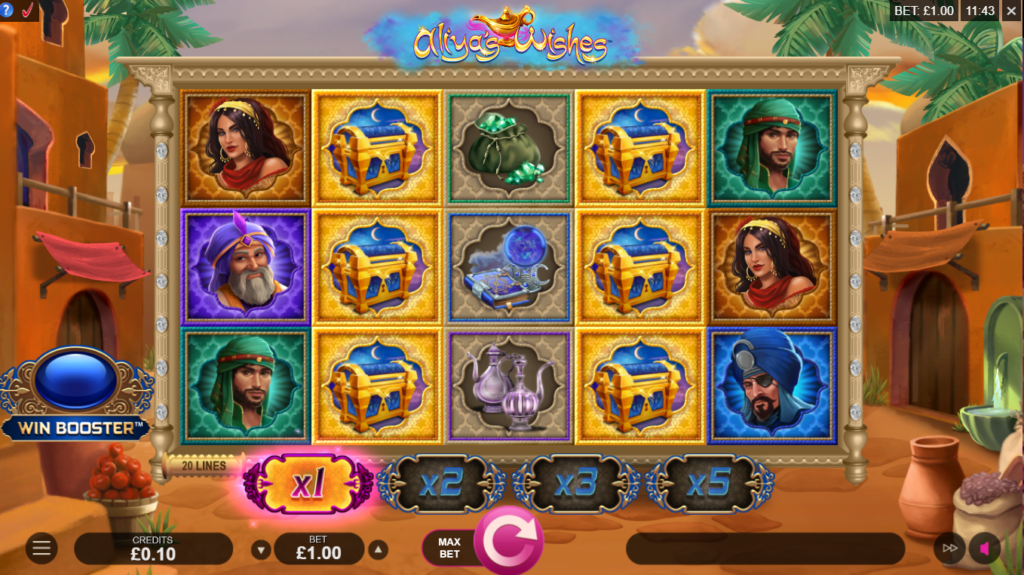 As is more often than not the case with Microgaming slots, Aliya’s Wishes is a beautifully designed slot graphics and sound wise. An Arabian village dons the background of this slot and puts you into a mystical world of magic and colour.

Using the Rolling Reels mechanic, Aliya’s Wishes has three rows across five reels which form 20 paylines plus progressive multipliers that could enable you to nab that max payout of £222,918 should you put down the maximum stake of £60. This is a pretty high variance slot so while you may find yourself waiting a while to get the win but these wins can be pretty healthy when they do come.

The aforementioned Rolling Reels is one of the best slots features you can get so we were grateful to discover that Aliya’s Wishes features it. It’s effectively like the cascading reels you may have heard of in other slots, as symbols will clear when they match and new ones will drop down in their place, which means that you can have multiple wins from one spin.

The RTP on Aliya’s Wishes is 96% so basically industry average, but you can boost that to 96.5% should you choose to opt for the Win Booster feature which will also change multipliers from 5x to a whopping 50x, but at the cost of double your stake. 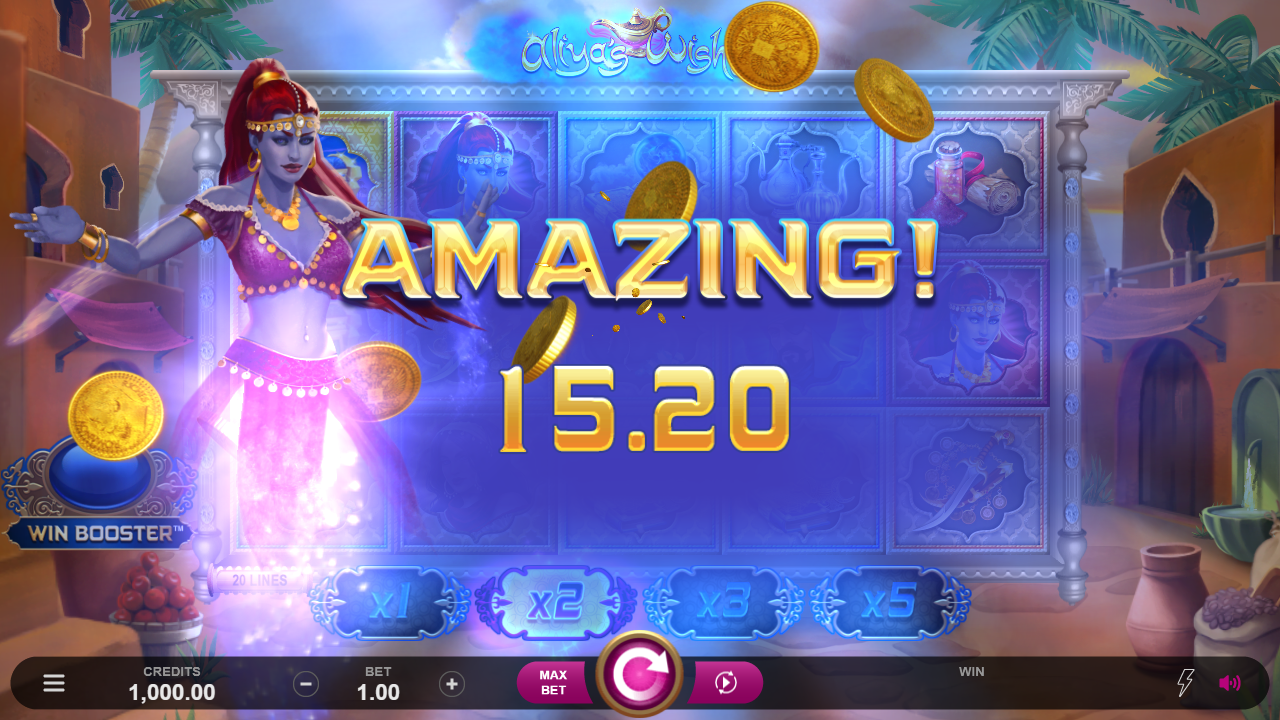 About The Bonus Features and Free Spins

Other than the Win Booster feature we touched on earlier, the only bonus feature is the Free Spins round which is triggered by landing the scatter symbol three or more times, which comes in the form of a lamp. Land five and you’ll get as many as 20 free spins which you can combine with progressive multipliers for big wins.

Gameplay wise, this is one of the best slots we’ve played for a little while which is to be expected from the genius of Microgaming. The only qualm we do have is that Aliya’s Wishes could probably do with a couple of extra bonus features to really rank as one of the best online slots like the Zeus Lightning Power Reels slot, but as far as it goes it’s a pretty great game.