Here's one of the new best slots games that brings you a pollinating swarm of bees. Making them powerhouses of nature, they sometimes get a bad rap for their stinging reputations. Beehive Bedlam from Core Gaming gives credit where it’s due by celebrating bees in this seven reel, seven row hive of slot activity. Core Gaming haven’t skimped on the gameplay either as an innovative free spins (‘Free Falls’) awaits, as well as a Honey Jar feature which is unlocked by collecting beekeeper symbols during base play. If that wasn’t enough, players can also scoop a huge progressive jackpot.

About the Developer of Beehive Bedlam

Although the word ‘innovative’ is often over-used, it’s more than apt when it comes to describing Core Gaming who was shortlisted for a 2016 EGR innovation award. Core Gaming was founded in the UK in 2007. By 2011, the developers had cottoned on to the growing mobile market and therefore switched to HTML 5 to optimise its best online casino slot games for mobile devices. Core Gaming have worked with the biggest names in the gaming industry such as William Hill, bet 365 and Sky Vegas to deliver a whole range of casino products. Their feature-packed video slots are particularly impressive with titles like Jackpotz, Colossus Fracpot and Rolling Stone Age.

Get free spins if you pay with phone credit casino. 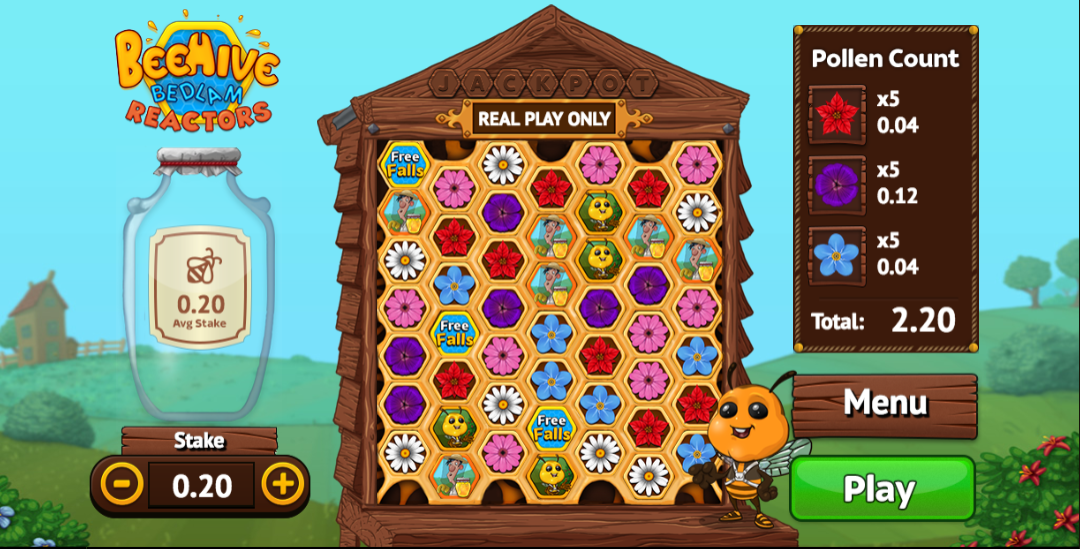 About this Jackpot Slot

Basic symbols are in keeping with the theme and include a host of variously coloured flowers, the beekeeper and our hero, Buzz the bee. Although there are no wild symbols to speak of, collecting Free Falls honeycombs will unlock a bonus round where higher value boss man and queen bee symbols also await.

Spin a cluster of three or more Free Falls symbols to trigger the Free Falls feature. The more symbols you land, the more free falls you will receive:

Saving the best until last, on the final Free Falls, a swarm of bees will drop letters over the empty honeycomb. If you manage to spell the word ‘jackpot’ then you will win the progressive jackpot. Good luck!

Landing clusters of beekeper symbols will put a little more honey in the jar. Once full, the Honey Jar feature is triggered.

During this bonus round you have to navigate a worker bee to avoid a series of obstacles while collecting valuable coins. There are ten different worlds to explore along the way, with multipliers applied to winnings on unlocking the next level. 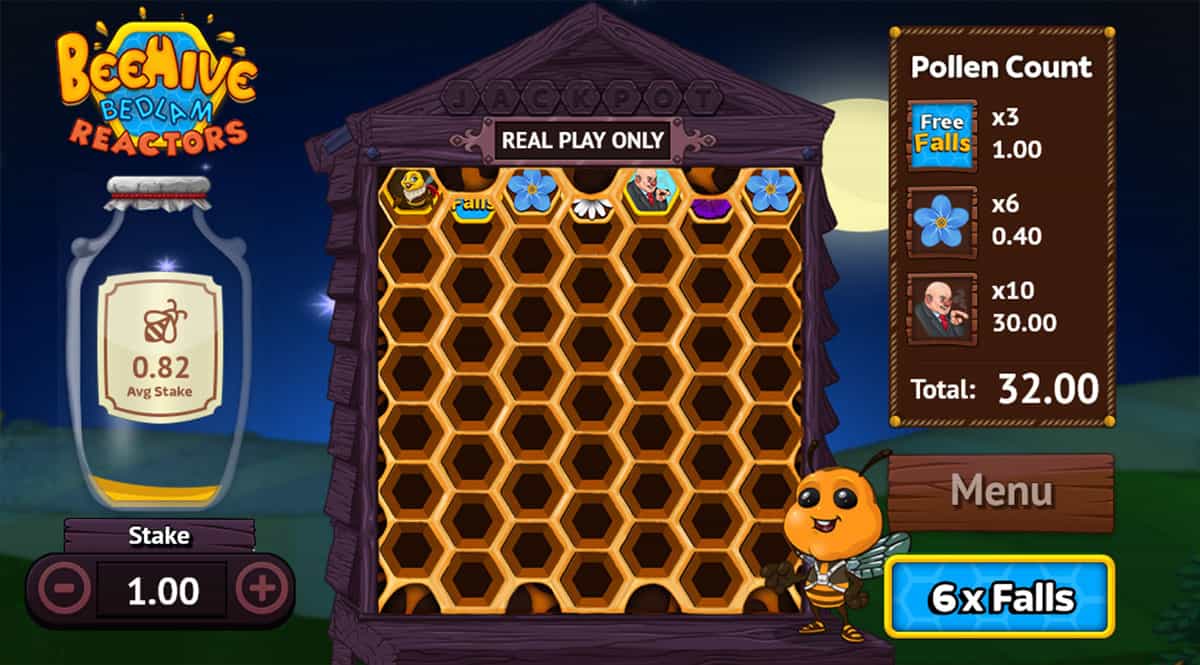 The Verdict on Beehive Bedlam Slot

Beehive Bedlam is a highly enjoyable, frantic online slot with lashings of gameplay and an RTP of 94.37%. The innovation is on display from the outset with an unusual seven by seven game-board. As well as an original free spins (‘Free Falls’) round, there is also a progressive jackpot with potentially life-changing cash prizes up for grabs. What’s more, you are guaranteed to unlock the Honey Jar feature so long as you have.

the stamina to fill the jar with that amber nectar. Find out what all the buzz is about by giving Beehive Bedlam from Core Gaming a spin! If you enjoyed Beehive Bedlam why not try Gem Rocks Slot.