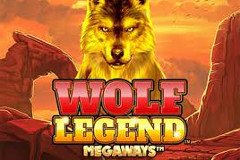 Blueprint Gaming has another addition to its MegaWays series. Wolf Legend MegaWays is a 6 reel up to 117,649 ways to win slot. Features here include an unlimited win multiplier, mystery symbols, a bonus buy feature, streak respins and free spins. Stakes start from 10p to £100 a spin on your desktop, mobile and tablet devices. Try this game at the best slot sites uk today!

Each reel in this Wolf Legend MegaWays slot can display up to 7 symbols. The more symbols appearing on each reel, the more there are ways to win ranging up to 117,649. The slot is set in the North American wilderness with symbols on the reels including card values J, 10, A, K, Q and 9, gold wolves, American eagles, bisons and big cats. The gold wolves pays the highest value of 1x, 2x, 10x, 25x or 50x your bet when 2, 3, 4, 5 or 6 land on adjacent reels.

The more scatters there are, the more free spins you win. You’ll get a chance to gamble for more spins,  more lives or more Golden Streak respins.

Why not play today pay by mobile slots like this one?

Blueprint Gaming has operated for several years developing land based and internet slots. The company already had a decent following, but their status was elevated even higher when the Gauselmann group acquired the UK Company in 2008. The Gauselmann group is a highly respected German gambling company easily spotted through its smiling sun logo.

This was a big step in the eight direction for Blueprint Gaming as it allowed the company to put more time into their live and online projects. In addition to releasing a lot of unique slots of their own, Blueprint also has borrowed licenses from huge TV series and movie franchises. More top games here.

Wolf Legend MegaWays has some pretty diverse features starting off with the mystery symbols, the Golden Streak feature and of course the free spins. Its volatility is very high with potential payouts going up to 50,000x your bet on a single free spin. Find this and Easy's other best UK online slots games right here!