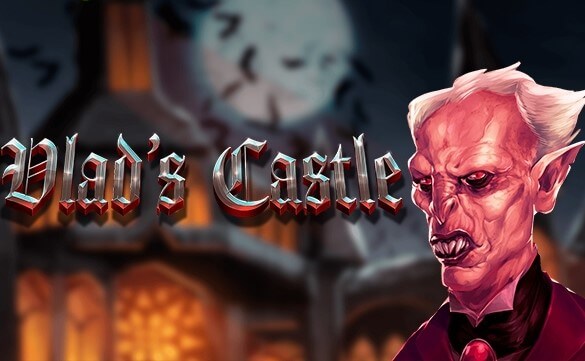 Vlads Castle is one of the best slot sites game from developer Eyecon, which is based on a Dracula theme. There are five reels, four rows and up to 25 fixed paylines of entertainment available to players, and the sound effects are suitably creepy.

This is a game for fans of fruit machines that also enjoy watching classic horror movies. You can find out more details about the game here, as well as a little more information about Eyecon and their work.

The game has a grey colour scheme, evoking a kind of cobwebbed horror movie feel. Ominous gates and other structures that are reminiscent of a cemetery frame the reels. High value symbols on the reels include a bat, a coffin, a white rose and scared looking woman. Letters and numbers are used as the lower value symbols.

One of the game’s bonus features is the portrait features. This is triggered when you land three of the castle symbols anywhere in view on the reels. You win one pick per scatter symbol in the bonus game, and each pick awards a multiplier of up to 100x the total stake. The other feature is free spins, which is triggered when you spin in three, four or five of the Vlad wild/scatter symbols anywhere in view on the reels.

This one is amongst the best online Easy mobile slots pay by phone bill, so make sure to check it out.

Eyecon is an Australian games developer, which is based in Brisbane in the state of Queensland. The company was founded in 1997, and has produced a catalogue of over 100 online casino games since then. Eyecon’s work extends well beyond making online slots, though, and they also work in spheres like internet multiplayer immersive games, LAN systems and television multimedia integration.

There are few areas of modern online gaming in which Eyecon does not have some interest these days, such has been the growth and development of the company. They also produce games for land-based casinos and sports betting companies.

You may also have played an Eyecon game if you like, as well as playing slots online, to play a bit of poker, blackjack or baccarat in your favourite online UK casino. Other best slot game from Eyecon include:

Vlads Castle is a decent slots game with some entertaining bonus features. The graphics look really good and, along with the music and sound effects, help to create a very immersive experience when it comes to playing this game.

This is a game that is simple enough to appeal to newcomers to slots gaming, but also offers enough complexity for more experienced players. Make sure you look out for Vlads Castle in your favourite online casino! If you don’t like this top slot, then try Mermaid Million Slots instead.