Everytime we see the word ‘Megaways’ in the name of a slot, we get a little bit excited. That’s because it’s probably the UK best slots mechanism in the world. Developed by Big Time Gaming, the Megaways engine allows an insane 117,649 ways to win, and that’s just unbeatable in the world of casino.

So, big green light on Pragmatic Play’s latest innovation Starz Megaways so far, but does the rest of the slot match up to it? Well, with an RTP of 96.48% it’s already above average, especially compared so some of the other Megaways slots we’ve come across.

Plus, you can get a maximum win of 10,000x your stake in Starz Megaways which is pretty good indeed. But, do bare in mind that this is a highly volatile slot so it is not for the faint of heart, nor the beginner gamer.

In fact, we’d recommend this slot for the more experienced player only, but if that’s you then you may well find yourself thinking that Starz Megaways is one of the best casino slot games in the market, because it’s packed with thrills and high-octane energy that will keep you wanting more.

About Pragmatic Play - the Developers of Starz Megaways

Pragmatic Play have been active in the gambling world since 2016, which ain’t a long time. While they don’t have the history of the best online slots companies, they are giving them a run for their money pretty consistently on quality.

Known for the decent RTPs and hit rates in their slots plus decent bonuses and welcome offers, Pragmatic Play use the popular i-Gaming software in graphics, which is one of the best slots development tools going.

Pragmatic Play are famous for developing some of the best online slots one can play. Here are just a few of the slot games they can offer:

And on top of that we now have Starz Megaways. We’re not sure this is the first Megaways slot from Pragmatic Play but we are sure hoping it’s not the last, as with a company that good at developing combined with an engine as fantastic as Megaways, it’s kind of a match made in heaven! 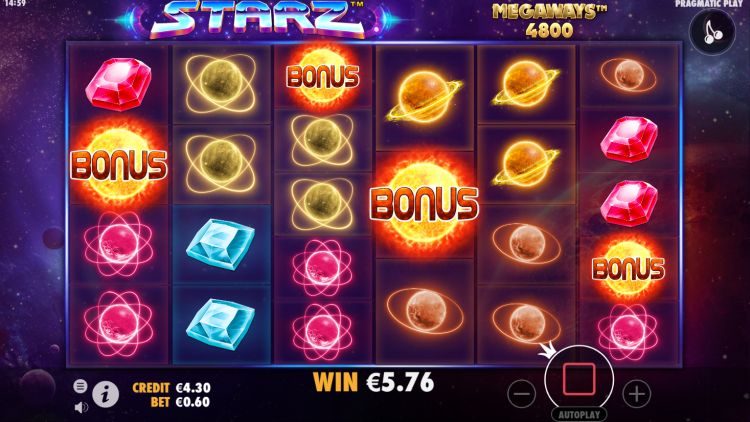 Laid across six reels, Starz Megaways contain between two and seven symbols per reel. The more symbols you do have, the more Megaways leading up to that gigantic total ways to win of 117,649.

With a combination of jewels and other cool symbols, line them up and try and fill out the reels to get those top multipliers and payouts. 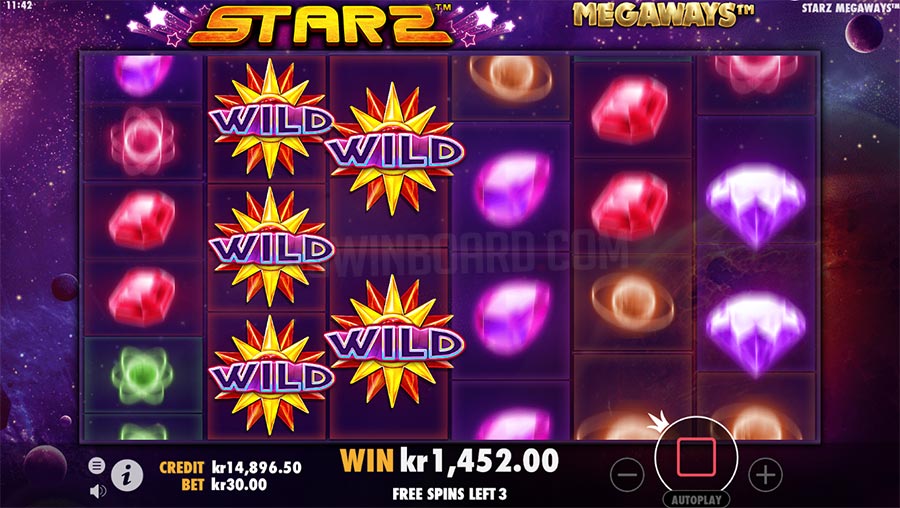 There aren’t a huge amount of bonus features to play with in Starz Megaways but maybe that is to be expected considering the nature of the game as described so far. There is an Expanding Wilds feature that we quite like where the wilds will grow in size to take over more spaces, thus increasing your chances to win from that particular spin. This is seemingly pretty random as to when it comes about.

There is also a Free Spins round you can get hold of in Starz Megaways. Its’s the most generous in the world comparing to some of the best slots as you need six whole bonus symbols to get 15 free spins, but if you get just three bonus symbols you’re still entitled to six free spins which isn’t too bad, we suppose.

The one thing we would like to ask Pragmatic Play to do if they were to ever develop a follow up to Starz Megaways would be to chuck in a couple of extra bonus features. That would really turn a great slot into one of the best online slots of all time, like the Solar Temple slot. So, Pragmatic Play, if you’re reading this, make it happen please!