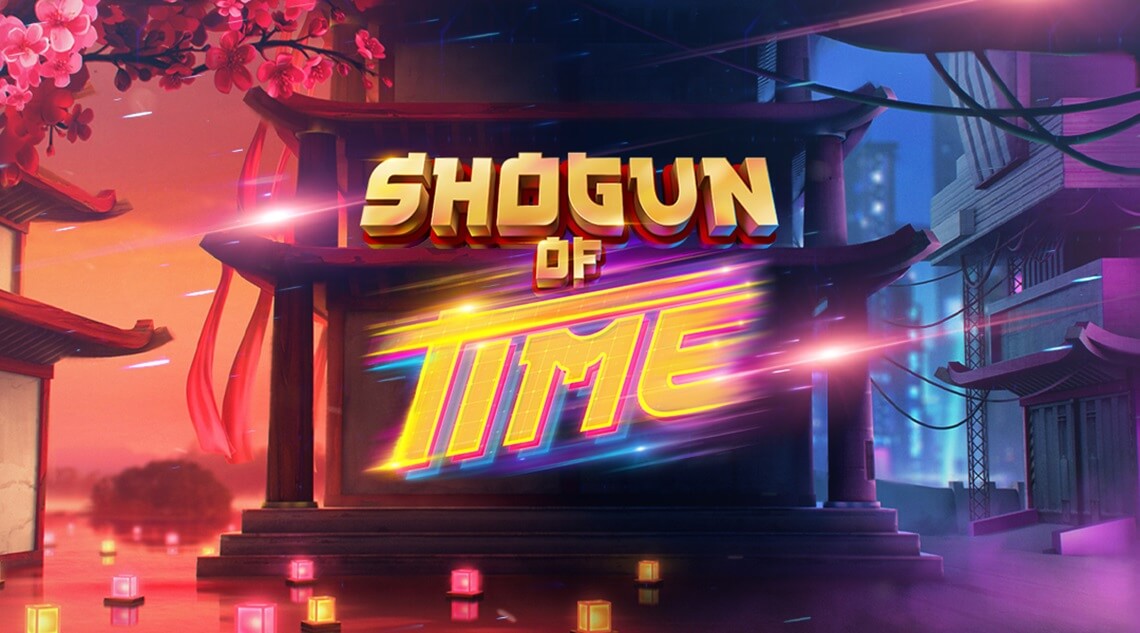 In the not so distant future, in the Land of the Rising Sun, is a world of humanoids, cyberpunks, time travellers and androids. Project yourself to the world of Shogun of Time and save humanity in this coproduced game, by Microgaming & Just for the Win.

Shogun of Time is a 4 reel and 81 pay-line slot game. It is playable from £0.10 to £100 a spin from all and any device. This is a simple slot that includes all of the much-loved online casino slot features. This includes free spins, wild symbols and re-spins.

The re-spin feature includes a 5th reel that provides the player with additional ways to win. Otherwise, the free spins feature starts with 16 free spins. During the free spins round, the reel setup changes to a 5 reel and 243 ways to win set. Play some of the best online slots uk games from Easy!

About the Online Slot Game

We thoroughly enjoyed this online casino slot game. It has quickly become one of our favourite games to play in 2019. We though the Japanese cyberpunk theme was an extremely original concept. This theme gave the developers an opportunity to produce some stunning visual art.

A few spins in and you’ll notice this slot has progressive online casino slot gameplay. This style of play is fitting for the theme. It uses the commonly used low paying play card symbols. These are A, 10, K, Q and J. They are presented as coloured holographic images. The Ace is a warm orange colour. The 10 is a tropical ocean blue. Jack is a deeper ocean blue.

The Queen is emerald green and the King symbol is a royal red. Higher paying symbols include more thematic illustrations. Geisha fans, samurai helmets, golden coins, samurai masks and warrior chest plates. You will also want to keep an eye out for the Shogun of Time logo because 5 will reward 12x your bet!

The setting of this game was beautifully crafted. When you begin the game you are greeted by a futuristic remodel of the city of Tokyo. Although the world has become a virtual-hybrid, Japanese culture is still ingrained into society. The deep blues and neon purple and pinks are pleasurable to the eye. The soundtrack is fitting for the game and catchy. We have been humming it in the shower, at work and at church. We cannot get it out of our heads!

In terms of bonuses and features, there are plenty of them! The wild symbol is represented by the time-travelling cyberpunk protagonist. It can substitute for all the other symbols to help form winning combinations. If you form a win with a four-of-a-kind combination, the Reel Split Re-spin feature is activated.

If you do receive the Reel Split Re-spin feature, a 5th reel is added to your game. This will be inserted to the middle of the reels with the 4 other reels sticking in place. Only the new reel will re-spin to give you another chance at receiving a winning combination.

The free spins are activated when you are lucky enough to get 3 or 4 scatter symbols on the reels. These reward 8 to 16 free spins. These free spins take place on a 5th reel. Additionally, the 3rd reel I the middle turns into a wild reel for the entire feature.

About the Online Casino Developer Microgaming

They later released their Viper software in 2002. This release propelled them to new heights in the gaming community. Microgaming has broken the record in the online casino slot industry. This was for paying out over $100 million worth of progressive jackpots in the last 10 years. Microgaming is known to pay jackpot winners in full rather than in instalments. Unlike other online casino companies who commonly use instalments. Head over to Easy Slots to learn more.

To create Shogun of Time, Microgaming teamed up with fellow developers, Just for the Win. JFTW is a younger company, having only been founded in 2016. Although in their infancy, the company is extremely passionate about the best slot games online to play. JFTW is striving to be industry leaders.

This is why this collaboration with Microgaming was so important. It allows Just for the Win to learn and develop from the current industry leaders. As of 2019, they have a dozen games released, with six in the process of development. We are always excited to hear what they are planning to release next. All of their releases so far have been extremely impressive. Learn more on how to play the game here.

The Verdict on Shogun of Time

Shogun of Time is a great escape from reality. A really exciting new game. And, a successful cooperative effort from Microgaming and JFTW. The gameplay is exciting, as you are always kept on the edge of your seat. The developers have made the most of their 5 reels and 243 ways to win setup.

The theme is excellently executed, and we assume as been designed by a fan of Blade Runner! Take Microgaming’s Shogun of Time for a spin if you want an exciting and rewarding experience. Cop and Robbers is another top-rated game you can play at Easy Slots site!