A game for those who have always felt like there must be something out there. An extra-terrestrial-themed best slots game from a truly innovative developer, Yggdrasil Gaming. The futuristic game-board is fitted with an alien detector which randomly alternates between reels during each spin. Whenever it lands on a reel inhabited by a game character, that character will become wild awarding potentially lucrative wins. If you land a scatter in the detector reel then you’ll be given secret clearance with seven free spins. Also worth a special mention is the out-of-this-world RTP of 96.1% which, together with its medium volatility, make Reptoids an action-packed slot.

Although Yggdrasil Gaming is somewhat of an industry underdog, they have earned a reputation as an award-winning developer whose bite more than matches their bark. Established in 2013, Yggdrasil began producing games in Flash but soon switched to HTML 5, providing games for some of the largest casino operators in the world across desktops and mobile devices. The secret to Yggdrasil’s success lies in their adaptability to new technologies and commitment to genuine innovation which was recognised with an International Gaming Award in 2017. This creativity shines throughout Yggdrasil Gaming’s portfolio of the best online casino slot games which include Gem Rocks, Orient Express, Beauty & the Beast, as well as traditional table games for those who prefer classic casino fare.

Reptoids is an interesting and relatively unique concept for an online slot, executed with panache by Yggdrasil Gaming. Basic symbols are represented by different ranking medals while high-value symbols comprise characters from the backstory of Reptoids, including a soldier, a scientist, an air hostess and a sinister looking business fat cat.

The reptilian gold tile is wild and substitutes for all other symbols except for the scatter humanoid coin.

Landing a scatter symbol in the alien detector triggers the Free Spins round. You’ll be given seven spins with all uncovered Reptoids remaining wild throughout the round. You will also receive an additional two free spins for every Reptoid you manage to uncover (up to a maximum of 13 in total!).

Wilds are sticky during this round meaning that you can rack up the wins for as long as your free spins hold out.

Sign up today at Easyslots.com and claim your free spins. 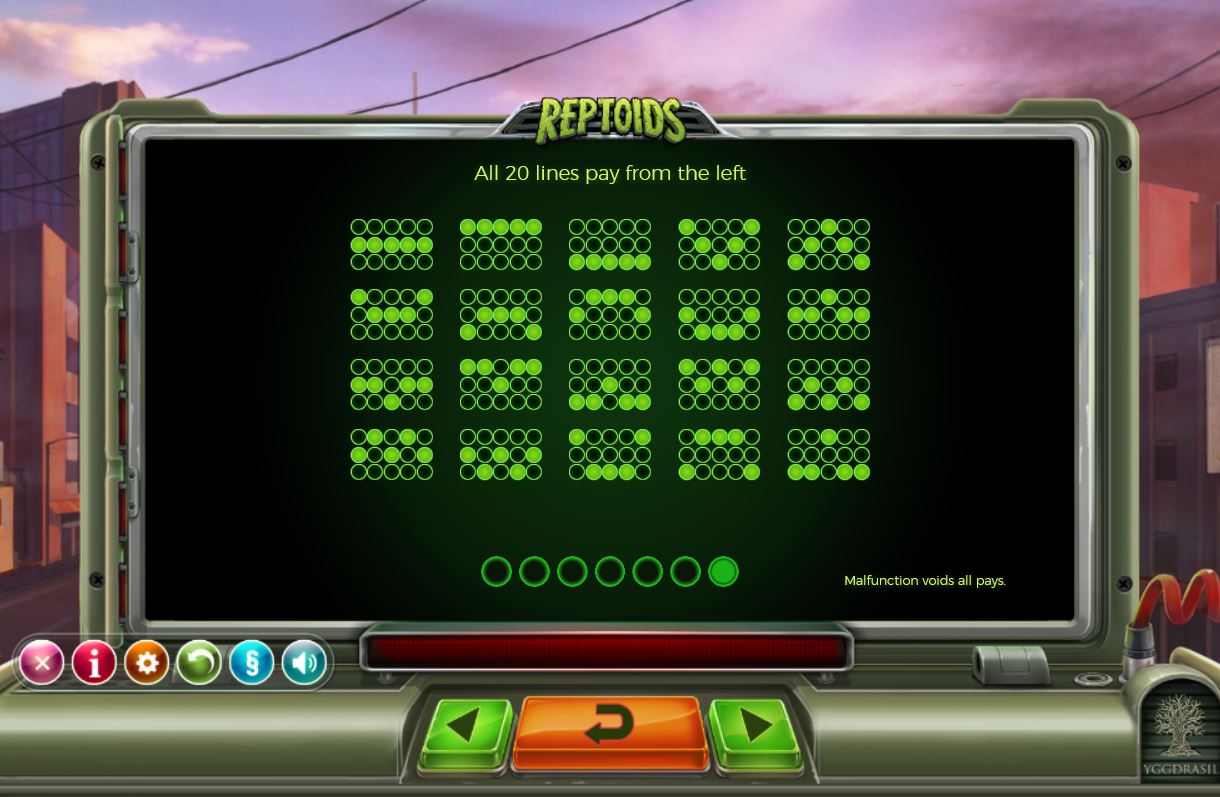 You don’t have to be a die-hard conspiracy theorist to enjoy Reptoids, the alien-inspired online slot from heavy-hitting developer, Yggdrasil Gaming. The theme has been well conceived and well executed. The fact that the alien detector switches between reels with every spin gives the base gameplay of Reptoids an edge over many other slots, ensuring you aren’t always waiting for that elusive bonus round. A stand-out aspect of Reptoids is its RTP (Return to Player) which is a staggering 96.1% - one of the highest we’ve seen in an online video slot. If you liked Reptoids then you should check out some of Yggdrasil Gaming’s other slots including Jungle Book, Valley of the Gods and Pumpkin Smash. If you enjoyed Reptoids why not try another popular online slots here on https://www.easyslots.com.