What’s your order? A pot of gold? Do you have the luck o’ the Irish? Follow us on the Rainbrew quest through a leprechauns’ brewery, where there is a range of your favourite drinks as well as your favourite short, ginger, cheeky friend.

This is one for keen slot players with impressive win odds of up to 2,270x of your original stake. Will the real slot slayer please stand up? There are 1,125 ways to win this best slots sites game, making it extremely enticing to play. Lose yourself in an enchanted brewery, with its stunning bright animations.

There are unbelievable illustrations, such as beer barrels, pint glasses and four-leaf clovers which decorate the background of Rainbrew slot! Just lose it, in this fun-packed game. Shake that leprechaun until his pockets are empty! There is fantastic cheery Irish music in the background, giving you an authentic Irish experience, like no other!

About the Online UK Developer

Just for the Win is pretty new to the online gaming industry, as their studio was only first launched in 2016. Although they are a young company, they have managed to garner a lot of promising hype since their foundation! Many gaming critics are touting the company as ‘the next big thing’, and their recent success definitely correlates with this theory!

They released a number of games in 2017, including titles: Amazing Aztecs, Deco Diamond, Side Winder, Icy Gems and Shogun of Time! The Gothenburg, Sweden, based company aim to produce high-quality online slot machine games with unique gaming mechanics and interesting themes and narratives!

JFTW are passionate about gaming and strive to ascend to new heights in the iGaming industry. They want to be the new leaders of the online casino gaming world, so watch out Microgaming!

About the Online Slots Game

There are 10 different pay symbols in this game. The lower paying symbols resemble five authentic Celtic emblem arrangements in the colours of emerald green, Royal blue, sunset orange, bright purple and ruby red. In Addition, you should also cross your fingers for the ancient Irish pipe, the pint of Guinness and an old-age Celtic beer barrel. The highest paying symbols in the entire game are the two leprechauns, who are the landlords of the brewery.

There are also expanding wilds which you can benefit from. Even better is the game’s easy-to-use autoplay feature, making it easy to engage with the theme for up to 100 spins without any exhausting extra clicking required! To gain the maximum win of 2,270x your original bet on this slot game is to land a block of three wild symbols.

If these rainbow coloured wilds cover the top, bottom and cover the three middle reels, 125 winning combinations will be released! We loved how exciting this game is, offering its players' numerous ways to win and frequent unexpected twists and turns throughout the same. Other additional gameplay features include the role of each ‘wild’.

Our favourite aspect of this game is the visual appearance of the game. We genuinely felt like we had taken a trip to Ireland. The brewery is extremely authentic, with the straw-coloured large brick walls giving a backdrop to the arched, medieval doorway.

The barrels are designed to look like they are crafted out of authentic oak timber. The detail put into the visual designs of this game are unbelievable. The team have gone the extra mile to visualise an accurate representation of a middle-age Irish pub. We also thoroughly enjoyed the Irish music playing in the background of the game.

The music composition is astounding. The composer has been clearly influenced by Irish folk artists such as The Dubliners, Tommy Makem and The Bothy Band. The combination of the imagery and sound deceived our mind into actually smelling the oaky fumes of an Irish brewery! We recommend trying this game solely for the aesthetics of the game, we enjoyed the experience before we span any of the reels! 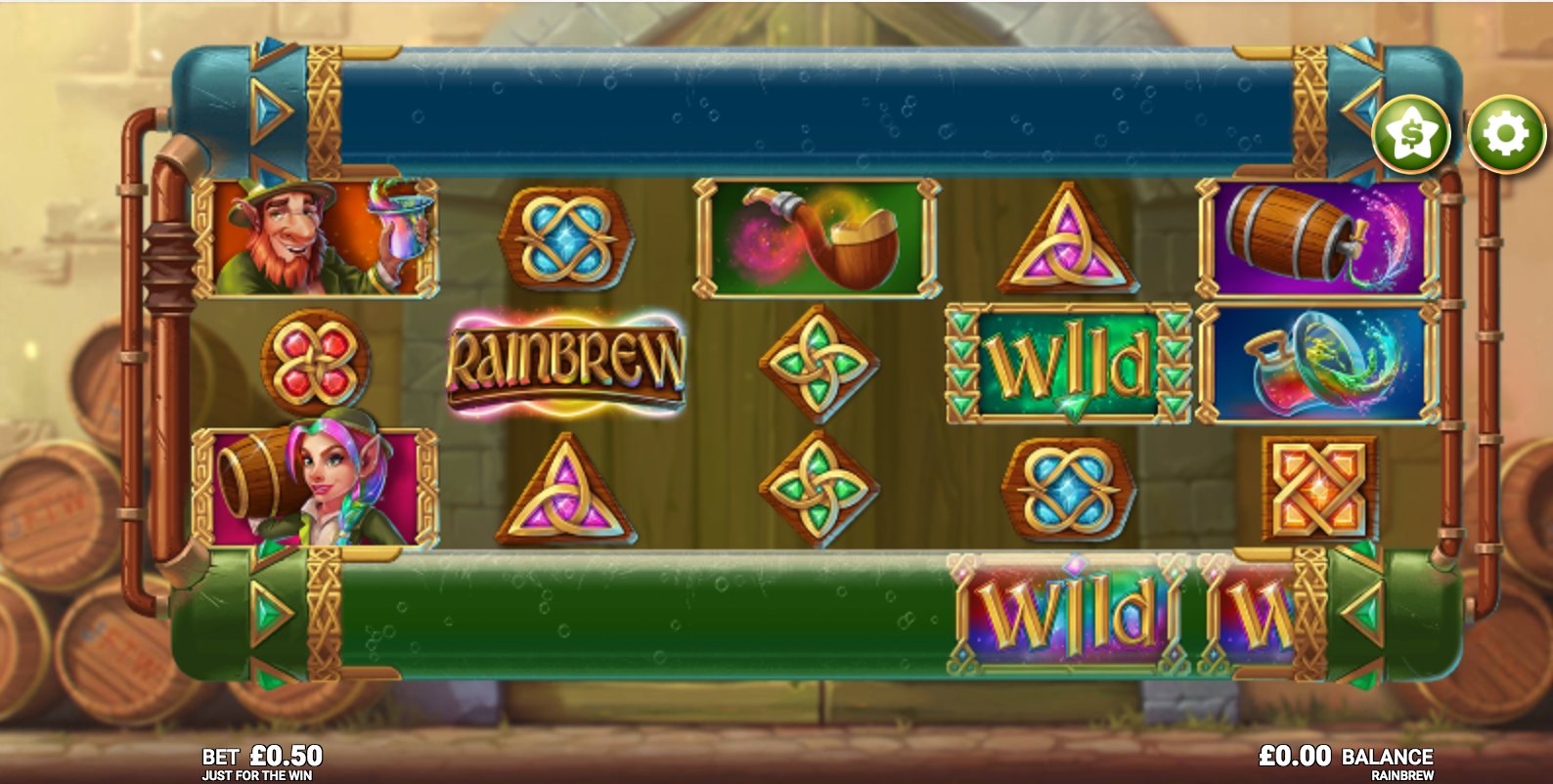 This game is one of the greatest Irish-themed online casino slot games on the market. If you are looking for this specific theme, we could personally recommend Rainbrew! It is less cartoonish and silly than the average leprechaun slot game, which we found refreshing.

It is an entertaining and exciting experience for advanced levelled slot players, who can engage in the range of impressive features and sophisticated gameplay. It is definitely worth a visit to this Irish brewery for a unique experience when one will play top free slot games.

It made us thirsty for a beer, excited for a jig and ready to read some James Joyce! On top of everything else, players will be kept entertained through the Irish music and auto spin element which gives time to take in the slightly more confusing expanding reels.

Like this one? Then try Royal Charm as well.