This online 5 reel is based upon the 1986 hit motion picture, Platoon. The film was based around the excerpts of a Vietnam War rookie played by Charlie Sheen undergoing and coming to terms with his first service in the military. Enjoy the dark overtones of this top online slots game and match helicopters and cast members to earn yourself a ticket out of the war along with some handsome free spin bonuses in this jungle-military themed game. 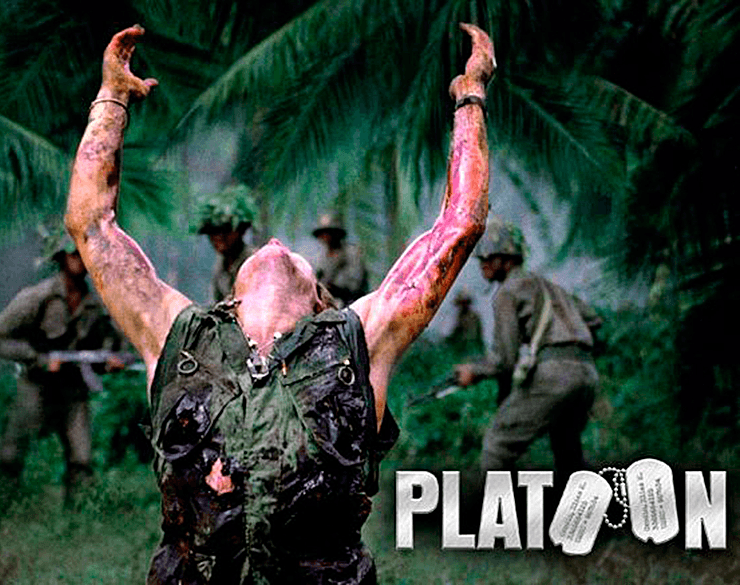 iSoftBet has vast experience in developing video slot games and supply some of the world's largest and most successful e-gaming operators. You can learn more about iSoftBet here. They have a great variety of different games, offering original titles as also branded content from popular TV- and Film studios. They love what they do and always try to bring new innovative solutions into their 5 star slot games online. 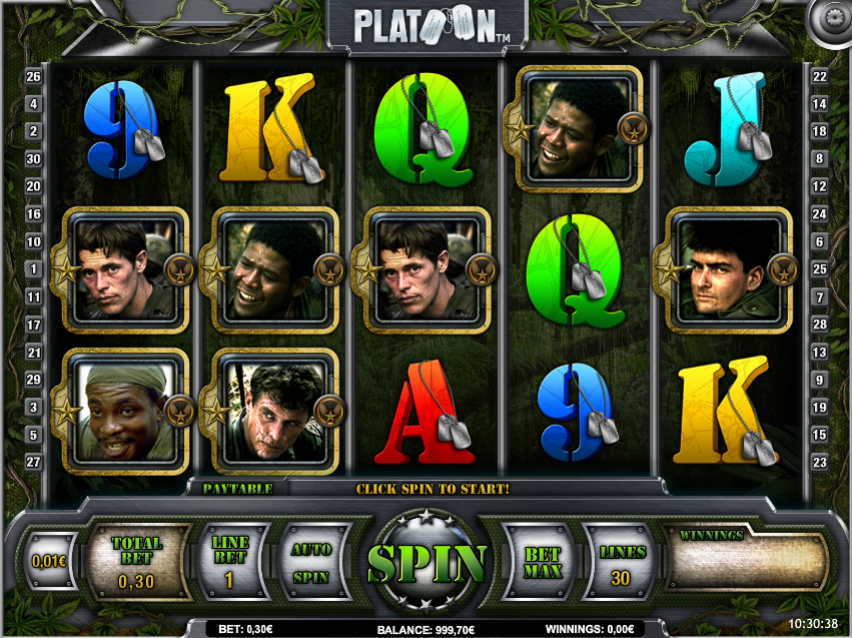 This adventurous-looking video slot is based on Oliver Stone's classic 1986 film. It tells a story around the vietnam war and you can see plenty of the characters of the movies on the reels. The background is the vietnamese jungle and the reels are within a metallic frame that has some plants growing on it. On the top of the screen is the game's logo and at the bottom row are some nicely detailed playing controls that have a theme related art-style to them, which makes the overall game feel nice. 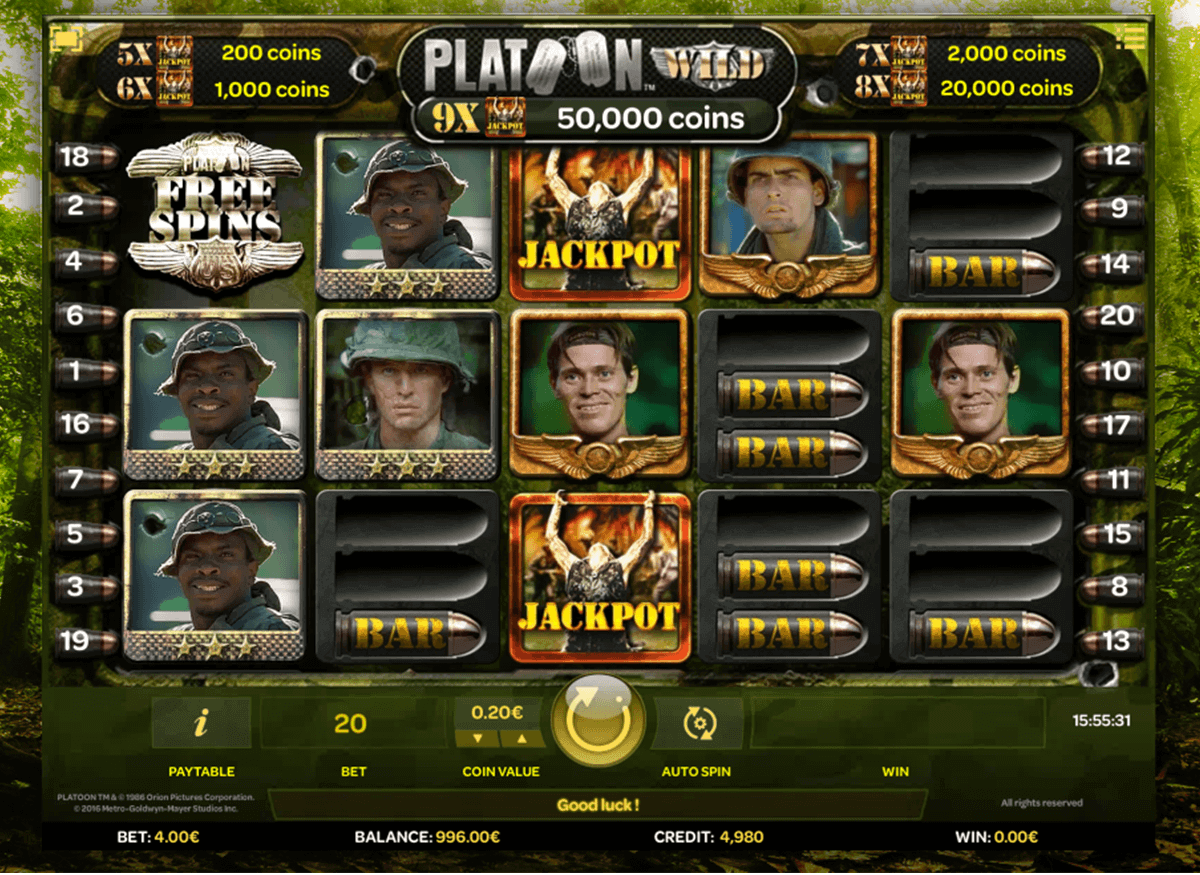 On the five reels and three rows you can find  the usual playing card symbols A, Q, K, J and 10, that all have their military identification collars hanging around them. There are also the famous characters Chris Taylor (Charlie Sheen), Sergeant Bob Barnes (Tom Berenger), Sergeant Elias Grodin (Willem Defoe), King (Keith David) and Big Harold (Forest Whitetaker).

If you land a tank you will have discovered the wild of this Easy game. It will substitute for any other symbol, except for the bonus scatter. When the wild helps to form a winning combination it will pay out the prize with a 3x multiplier applied to it. The wild will then move one position to the left and you will get a re-spin. The re-spins end when all wilds have dropped off the left hand side of the screen.

Look out for the military chopper, it is the Bonus symbol of this game and if you land three, four or five of them you will win a payout of five, ten or fifteen times your total stake,respectively. You will also be awarded eight, ten or twelve free spins. During the free spins feature any winning combination can be formed from both sides, so from right to left as also left to right. The wandering wilds can also be triggered during this feature which will increase the chances of big wins. The free spins feature can also be retriggered by landing three, four or five of the bonus symbols again. Join today and play online slots games! 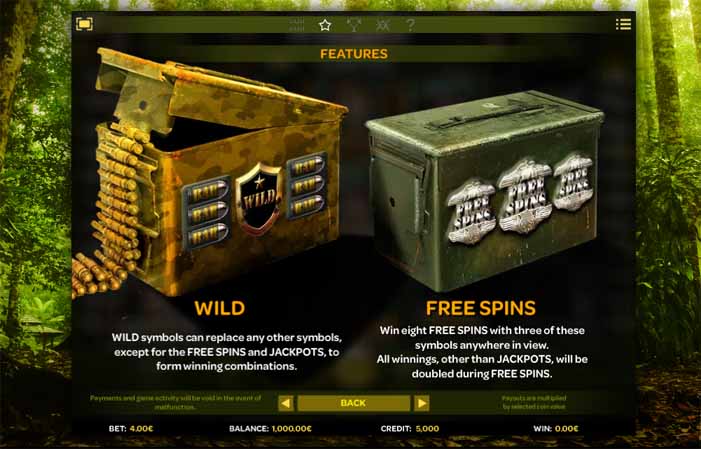 There are 30 paylines in this exciting game and to try a spin yourself you can bet as little as 30p or up to 30 pounds for bigger outcomes.

Platoon is an eventful video slot with lots of adventurous features. The wandering wilds are amazing to turn your spin very lucrative very quickly. The free spins offer plenty ways of forming winning combinations and additional prizes as all other features are also active. The art style adds a lot to the game feel as it is of a high-quality and will immerse you into the vietnam war theme quickly. Platoon has a great gameplay experience to offer and will emerge you right into the middle of the classic movie it is based on from 1986. Read more about how to pay with phone credit casino.