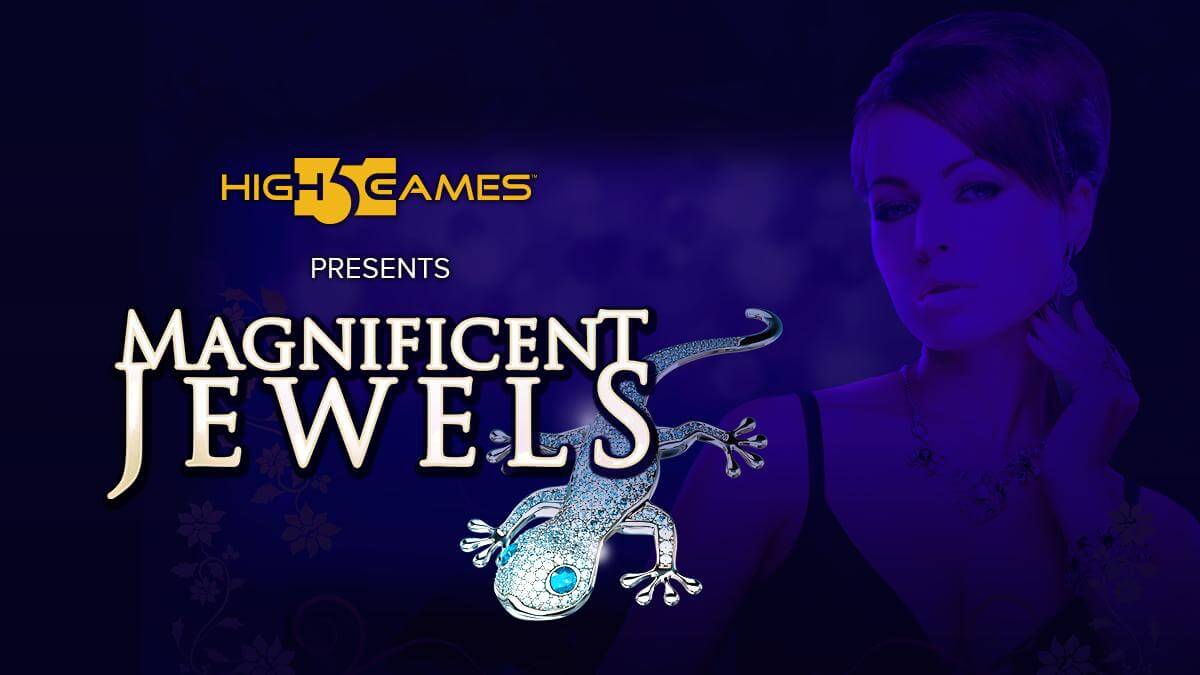 Magnificent Jewels is a game from High 5 Games, which offers five reels and three rows of entertainment, with 15 fixed paylines. It is based around a theme of classy jewellery, wtih gemstones making up most of the symbols used on the reels. It certainly looks like a game which is aimed at a female demographic. We’ll take a closer look at Magnificent Jewels here, and you can also find out a little more about High 5 Games when you play at the best slot sites.

The background for the reels in this game is dark blue, with a portrait of a beautiful and enigmatic woman imposed discreetly in the background. The reels form more of a grid than a standard reel set-up, with the symbols floating over the blue background and sliding rather than spinning into place. The lower value symbols are gemstones of various colours, while other, more valuable symbols include a silver salamander and a sapphire butterfly. If you spin in five salamanders then you’ll win 150 times your stake. If you fill all 15 winning positions with matching symbols you'll receive the game's top prize - a 20,000x multiplier.

The game’s scatter symbol is the Magnificent Jewels logo, embossed on a golden shopping bag. There is no wild symbol in the game, a factor which highlights this game overall simplicity. The game also deploys the tumbling reels concept, where winning combinations fall away to be replaced by new winning combinations. This is always a good thing to see in a game for players who like to win big when they’re playing slots online. Tumbling Reels is triggered by any winning combination on the reels. Looking for more great slots? Then, we suggest you to check out Mermaid Slots!

High 5 Games was established back in 1995, and it has gone on since then to establish a reputation for producing high quality games for both the online market and real world casinos. The company started by making games for casino cabinets, but soon branched out online when internet gaming started to become popular at the beginning of the 21st century. The company has a catalogue of over 300 games to its name, and has offices in 50 different countries.

In 2011, High 5 released two of the slots world’s most iconic titles, in the shape of Golden Goddess and Black Widow, which went on to become two of the most successful online casino games in history. You are sure to still find them in your favourite online UK casino. The company has picked up plenty of awards in its history too, including the Electronic Gaming Review’s 2016 award for North America’s Best New Game.

Other High 5 games include:

Find more games by High 5 Games at Easy Slots! Online slots pay by phone like this one are the ones you shouldn’t miss. Click to join Easy Slots, the best phone site and play it now.

Magnificent Jewels is a solid basic slots game that will appeal to most fans of online fruit machines. There is a lack of bonus features in the game, which is a bit of drawback, but the game looks very slick. The way the symbols float across the screen also looks classy, and there is a decent soundtrack to enjoy while you play. You can certainly win some big prizes if the right symbols spin in on the reels. Want to find out more? Try more of the best slot game!