Who wouldn’t want to go on a romantic trip to France? Now you can through Lucky Valentine the most romantic slot!

Lucky Valentine by Red Tiger Gaming is a 5 reel, 20 payline slot that will take you on a trip to one of Europe's most romantic cities, and is probably one of the best slots online today. Bonus features players will enjoy in the game include up to 20x multipliers, random wilds, free spins, high value symbol spins, mega 3x3 wilds, etc. The Tower Bonus in the game can win you up to 800x your stake.

Goodies on offer from Cupid's Arrow include random wilds, mega 3x3 wilds, multipliers of up to 20x, and high value symbol spins plus free spins and so much more. Players who love love will enjoy this cartoon romantic theme where they get to spin for just 20p on all iOS and Android PC, mobile and tablet devices.

Lucky Valentine has a fun cartoon design that isn’t too overbearing on the romantics. Probably one of the most romantic places on earth, the Eiffel Tower lies in the background with symbols on the reels including playing cards A to 10, a bottle of bubbly, an ice cream, a Valentine's card, two phones one for him & another for her and a teddy bear. The Valentine's card rewards the highest value in the game where if 5 land on a payline, players receive 16x their total bet on this promotion slot.

Players will see their favourite bonus symbols like wilds and scatters too in the game. The wild symbol in the game can replace all the other symbols except the bonus scatter symbol. 5 wilds on a payline will win you 20x your total stake or an equivalent of 400 coins. There are plenty of other extra features Red Tiger Gaming has in store for you in Lucky Valentine. Check it out;

Cupid's Reels feature – now and then a tornado randomly blows onto the reels. The tornado can suck up all the low value symbols from the reels helping you form only high value winning combinations.

Mega Wild feature - an animated Cupid flies onto the screen and adds a giant 3x3 wild diamond ring onto the reels.

Love Bomb feature – Cupid starts firing arrows from his bow ending up converting a random number of symbols into wild symbols. A new payout can be carried out with the newly formed wilds in position.

Love Multiplier feature - Cupid flies onto the reels and positions himself next to a bin. He nudges the bin releasing plenty of multiplier extras. The more nudges you get, the higher the multiplier goes. You can end up with boosted payouts of up to 20x.

2 bonus features can be activated when you land a combination of specific symbols as follows;

Free Spins feature - 3 heart symbols can land anywhere on the 1st, 3rd and 5th reels on one spin to activate this feature. Pick 1 of 3 triggering hearts and you will reveal the number of free games you've received.

Tower Bonus feature – 3 Bonus symbols can activate this feature on the cash trail. Make your way up the tower and win various cash prizes as you climb. Cash awards can go up to 800x your total bet in this feature so keep your fingers crossed that you reach the summit. 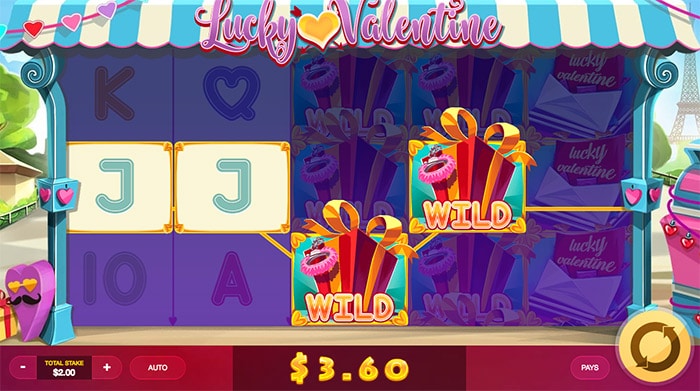 Red Tiger Gaming is an online casino software company with a wealth of experience creating the best online slots game. Red Tiger started operating in 2014, with the team behind operations already having experience in creating high quality games in Asia and Europe.

Red Tiger Gaming has a distinct noticeable logo, consisting of a majestic red tiger’s head. Their games are available to play at a variety of online casinos, just make sure you search ‘Red Tiger Gaming’. The team at the company is tasked with producing the high quality Red Tiger Gaming slots, which are then extensively tested by gambling authorities in Malta and the UK, both places where the company is allowed to operate.

Red Tiger Gaming contains one of the most diverse teams including talents like; mathematicians, designers, web developers, psychologists, creative directors, etc. Their collection of slots has some of the most exciting 3-reel, 5 reel and multiple ways to win slots in the industry. Their style is mostly modern, unique theme and styles, intuitive bonus features and high stakes games. Some of their slots include;

There’s so much more to enjoy featuring slots that cover unique themes and storylines like action, humour, adventure, mystery, horror, history, love, etc. Also, both beginner slot players and professional slot players can enjoy these slots as they are very easy to play. Make sure you check out Red Tiger Gaming casino slots here at Easy Slots a pay by mobile casino. 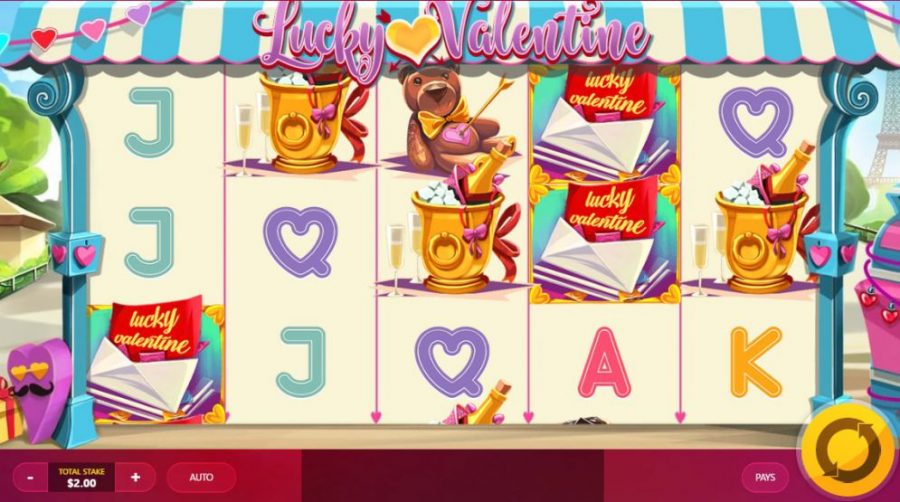 The Verdict of the Lucky Valentine Video Slot

Lucky Valentine by Red Tiger Gaming has a nice design and comes with a lot of exciting extra features – easy enough for any beginner to navigate. The randomly triggered bonus extra features occur regularly enough to provide exciting base game boosts. However, if you’ve played Red Tiger Gaming slots before, then you know that the bonuses can take time to trigger. The biggest plus is that when these bonus features get triggered, they can be very rewarding.

The base game features like Cupid's Reels feature where low value symbols are removed from the reels, the Mega Wild feature where animated Cupid adds a giant overlay wild lands on the reels and the Love Multiplier feature where Cupid positions himself next to a bin on the reels. When he nudges the bin, plenty of multiplier extras are unlocked.

The more nudges you have, the higher your multiplier goes. Players can end up with boosted payouts climbing up to 20x. In the Free Spins feature, 1 of the 3 hearts that activated the feature will unveil the number of free spins you've won. In the Tower Bonus feature, players will encounter a cash trail that awards various cash prizes with each climb. Cash prizes can rise up to 800x your total stake during this feature.

Can’t get enough of top rated slots? Why not test your skills at this modern classic, Fruit Collector Slot, a tribute to the very first slot machines!