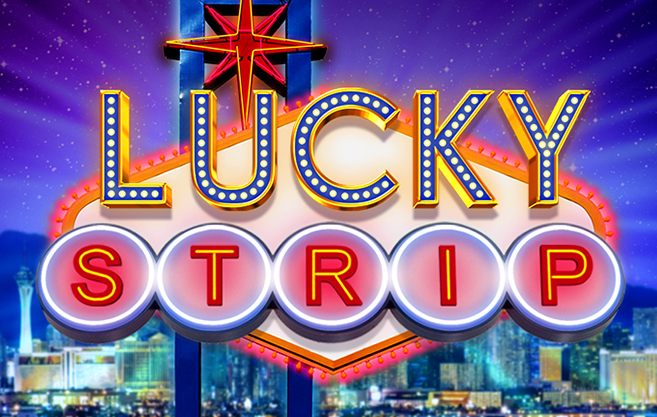 Lucky Strip is a slot game from developer High 5 Games, and it is based around a theme of the Las Vegas ‘strip’, or its main street, rather than anything saucy that involves poles or exotic dancing.

The game offers five reels, three rows and 40 fixed paylines of entertainment to players. You can find out more about the game and about High 5 Games by reading this review at these top slot sites.

The game has Las Vegas as its setting, which is very appropriate for a slots online game. The graphics are sharply rendered and look slick, though there is little about the game’s overall visual design that particularly catches the eye. The reels spin on what looks like the green baize of a gaming table, which matches the setting of the game. The lower value symbols on the reels are the usual range of letters and numbers.

The game uses several higher value symbols too. These are all associated with Las Vegas gambling culture in some way. Dice, poker chips, a roulette wheel and some flash male gambler are all used as higher value symbols on the reels. There is also a female character, and she is based on a real-life model – Melinda Barn, who was a Miss Universe contender in 2012.

The game’s bonus symbol is a rendering of a ‘Welcome to Las Vegas’ sign. The game’s wild symbol is easy to spot, as it is the word ‘Wild’. It can appear on the second, third, fourth and fifth reels, and can substitute for all symbols apart, including the bonus symbol, to create winning combinations. Discover more best slots, such as Shamans Dream Slots, here.

High 5 Games was founded in 1995, and has expanded since then. The company now has offices in over 50 countries across the world. Players can browse a catalogue of over 300 High 5 Games, with some iconic titles included in the ranks of those 300. The company is perhaps best known for two games that were released in 2011. These games were Golden Goddess and Black Widow, and they are among the best known slots games in history.

The quality of High 5’s titles has seen them pick up a number of awards over the years. Among these awards is the Electronic Gaming Review’s 2016 award for North America’s Best New Game. They picked up an award from Facebook in 2012 too, being named as the social media site’s fastest growing virtual casino.

Other best slots games from High 5 include:

Find more games from High 5 Games when you visit here.

The game has a touch of Las Vegas glamour about it, not least due to there being a real model as one of the characters on the reels. Look out for Lucky Strip on your next trip to your favourite online casino! Click to discover many more best-rated pay by mobile slots here.