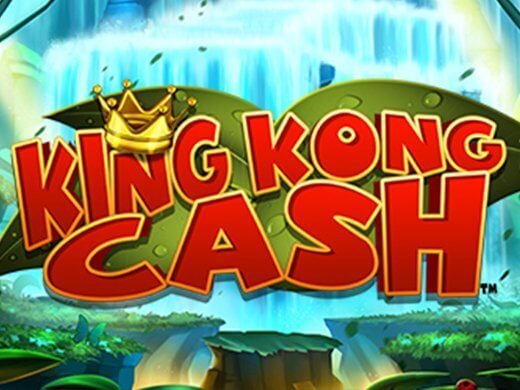 King Kong Cash is a 5 reel and 20 payline Blueprint Gaming game. The top slots online game includes up to 9 bonus features, 4 of which are activated randomly during the main game. You have a chance to benefit from matching symbols, re-spins, random wilds and more.

There are also 5 main bonus features. You will also get to spin a wheel that determine which of the main features you’ll get to play. You get to match barrels to win cash rewards, free spins, cash bonuses, etc. Stakes start from 20p to £500 a spin. With easy slots you'll find even more great games.

The King Kong Cash reels are set in a dense, jungle background. Symbols on here include rhinos, cartoon crocodiles, tigers, parrots and playing cards A to J. The highest paying symbol among the standard symbols is the King Kong Cash logo. When 5 of these land on a line, you’ll win a 500-coin payout. The barrel acts as the game’s wild and offers payouts of up to 500 coins per line and can replace all the other symbols except the Bonus scatter.

King Kong monitors your spins and can randomly award base game modifiers. He can also activate bonus features, when 3 King Kong Bonus symbols land anywhere on the reels on one spin. You’ll then spin the wheel to determine the bonus feature that's activated:

· Barrel Blast feature - Make a pick among the barrels. Find 3 matching ones to win the multiplier reward. If 3 Golden Monkeys land, you’ll move on to the Big Money Bonus feature.

· King Kong Trail feature – this feature is a cash trail bonus with a classic, Donkey Kong appearance. Make your way up the trail as you collect prizes. When the Golden Monkey lands, you’ll move on to the Big Money Bonus feature. If a bomb lands, it marks the end of the game.

· Golden Kong Free Spins feature – Collect wilds on each free spin. Once they come to an end, players win wild super spins where all the wilds collected come into play. After every super spin, choose a barrel, find the golden donkey and you’ll be able to spin again.

Deposit by mobile and play this top uk slot game and more with free spins now at Easy Slots site!

Blueprint Gaming has been operating for several years, creating land based and the best slot game to play online for casinos. The UK Company made the news in 2008, when it was bought off by the Gauselmann group, the largest German gambling conglomerate.

This allowed Blueprint to take on a prominent role live and online. In addition to creating a lot of unique slots, they also bought the rights for TV show slots like ‘Casper’ the ghost, Deal or No Deal and more. Easy Slots has many of the developers games.

The slot has an excellent design together with a nice range of extras. If you love variety in your slots, King Kong Cash will most likely be highly appealing. There’s a lot on offer in terms of features go. The base game modifiers hit regularly, but the bonus features are much harder to activate.

The modifiers deliver pretty good wins, but you could be waiting a while. The slot's variance falls in the middle range. Mermaid Millions is another great slot you can play at Easy.