Hades is one of the few UK best slots games that feature Yggdrasil's GIGABLOX mechanic. In this release, you'll enjoy one of the best online slots that take players to the underworld. Of course, it may be dark down there, but the features and winning opportunities are quite illuminating! Of course, you can expect dark symbols from a slot like this.

The question is if you dare venture into the dark depths of the underworld as you spin alongside the God of the underworld and the Dead. With some unique features, including the rewarding Yggdrasil's Gigablox mechanic, Hades casino games has the power to shock all that are brave enough to spin its reels.

To help you discover why this slot is one of the best slots online with a mythical-themed, check out our review of Hades slot below. Better yet, play now on Easy slot.

Experienced players are known to swear by the casino games developed by the relatively new Yggdrasil gaming. There are so many riveting features within their games, such as bonus games and free spins.

Also, people tend to believe they have a fair chance of winning the casino games from this developer because their slots theoretical have payout percentages they are close to 100%. Whatever your take on these guys, the fact remains that they are very innovative, and understand the gambling industry.  Some Yggdrasil Gaming slots are:

Play these casino games and several others on Easy slots. 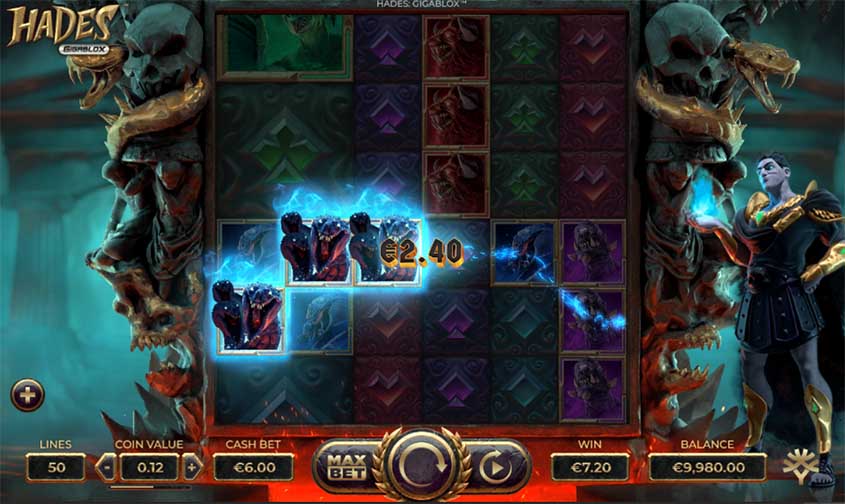 With Hades online slot, the king of the dead stands on the right and is able to unlock special features like the game's free spins bonus. However, he wouldn't just do anything like that, except you set the game's six reels and 50 pay lines in motion. In this slot, bets run from as low as €0.10 to as high as €100.

If you are lucky enough to line up three or more of the symbols below, you can win prizes that you worth around 400X your coin bet (which is 8X your total bet size):

Card symbols (carved into blocks), the Hydra, the Horned Beast, the Mutant Bird, the Minotaur (jackpot symbol), and the three-headed hounds is the game's scatter symbol.

Because Yggdrasil Gaming made Hades slots to use the Gigablox mechanic, it is expected that larger ones will flank standard symbols. The oversized blocks begin at  2X2 but may be as large as 6X6. When you have these symbols falling into view, they will cover more of the spots on the game board and make it relatively easier to form winning combinations.

So, while you have six reels in play, it is quite common that you may only need to throw in a couple of matching symbols and a Gigablox in order to unlock a prize. 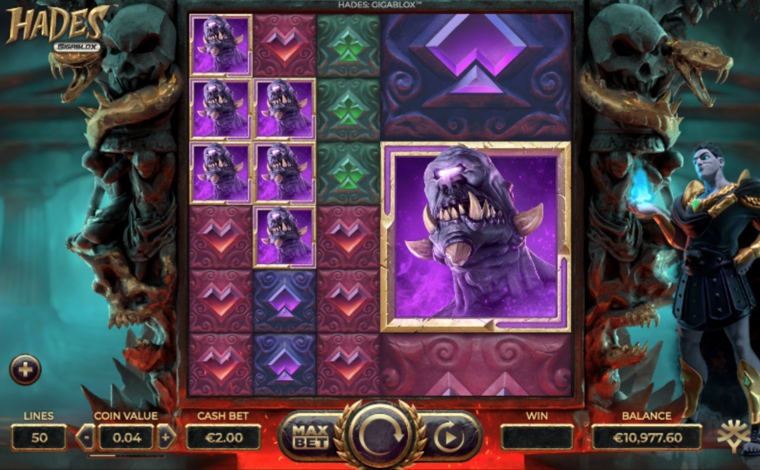 Wilds: Hades online slot games are packed with several special features. Aside from the Gigablox mechanic, there are wilds to help you form winning combinations. Here, rather than a single wild symbol, this game features four. To differentiate the wilds from standard symbols, they are designed in gold.

Free spins: To activate the rewarding Hades slot game free spins bonus, a player needs to roll in at least five scatters. When you successfully unleash the hounds, you will be giving as many free spins as the scatters in view.

Multipliers: A victory for Hades when he fights, will change any defeated symbol into a wild symbol. The more fights Hades wins, the higher potential a player has. Winning as many as ten fights during the free spins round will activate a 2X multiplier. If you keep winning, you can unlock multipliers that top 10X and may potentially payouts up to 11,129X!

Hades is one of the best slots online when it comes to features. Try these on Easy slots. 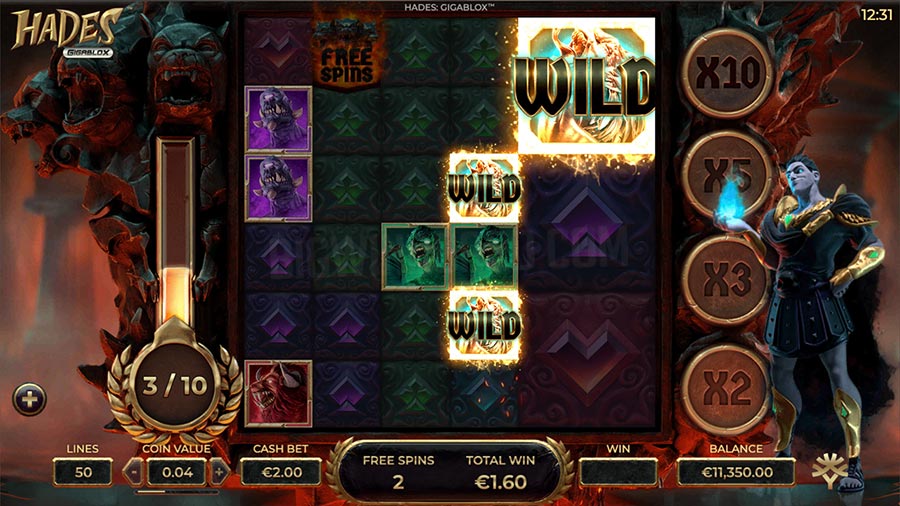 Hades proves that slots are fun to play because they come with interesting themes and gameplay. Though Hades may not be one of your favourite online slots, it is surely worth a trial if you need something new and exciting. Try it or the Golden Tsar slot on Easy slots.