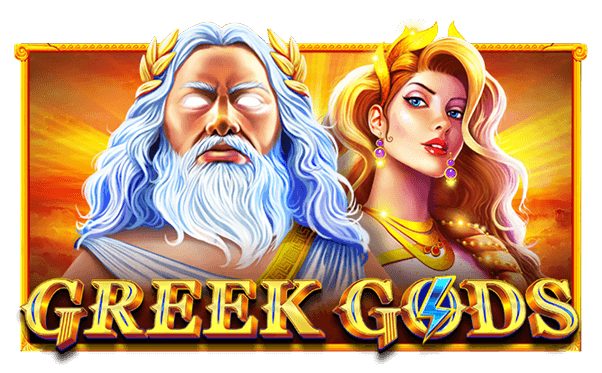 Greek Gods is a Greek-themed slot that casts visible lights on ancient Greece as the origin of modern civilization. Several best online slots are centered on varying Greek themes. Greek Gods pivots around Zeus – the Supreme Ruler of all gods in ancient Greece – and Hera, who's the wife of Zeus and Queen of Greek gods and goddesses. Hera also doubles as the goddess of marriage and birth – and by extension, goddess of multiplication.

The two gods are going to be multiplying your payouts with awesomeness, as well as stunning display in the ancient Greek temple.  As one of the best online slots around, Greek Gods is powered by 5 reels, 3 rows, and 243 pay-lines. It's needful that you read the more detailed part of Greek Gods and it on Easy Slots best slots sites.

Greek Gods is a trademark product of Pragmatic Play, an extraordinary developer with blazing records. Pragmatic Play is a game developer with proven ingenuity in the i-Gaming industry.  Founded in 2015, Pragmatic Play has deeply rooted itself in stunning technology, hence blazing a remarkable trail of innovation. Most games by Pragmatic Play are steep in sophisticated designs that make them accessible to all without stress.

The brainstorming that goes into Pragmatic games is quite commendably seen in its game structure, especially the HTML5 in all its games.  Overall, the i-Gaming industry has recorded a boost with the presence of Pragmatic Play games, which is why the company has a plethora of accolades under its belt.

You can play the above games and more from this developer on Easy Slots today.

With a Greek theme, you can expect to have a shimmering display on the reels. The gameplay is rooted deeply in getting symbols of a kind to land on the reels, just like most Greek-themed deposit by mobile casino slots. The base game has the random Awards Feature setting some mind-shattering awesomeness to the reels, with some wins. The bonus game has tendencies of rewarding you massively in the Wheel of Fortune feature, as well as the free spins feature.

The highest symbols are expectedly the Zeus symbol, followed by the Hera symbol. The mid-paying symbols include the Harmonica music instrument and the Chalice. The low paying symbols include standard Card Suits such as A, K, Q, J, and 10. The gameplay is placed a minimum of 25 Pence and a maximum of 125 Pounds for each spin.

You can have a personal experience of the gameplay and symbols by playing Greek Gods on Easy Slots now. 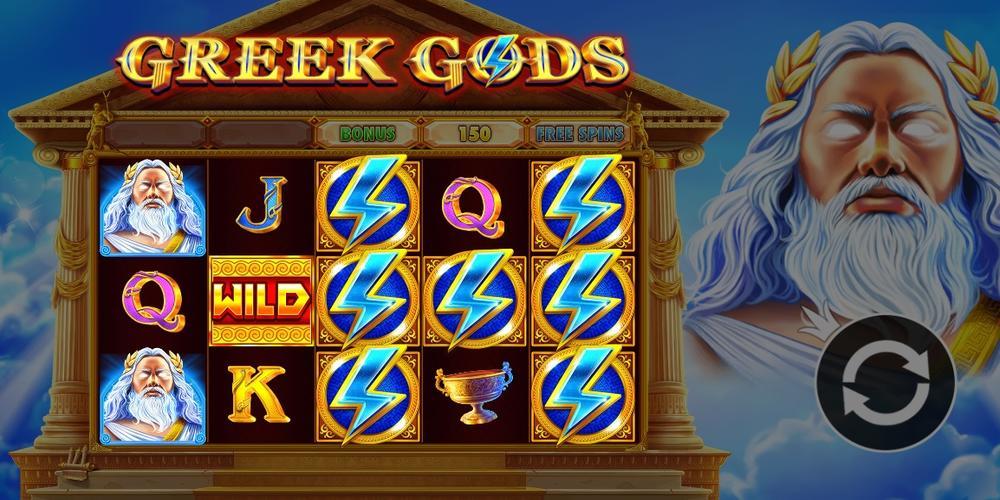 There's an additional row directly above the reels from which random rewards appear on the 3rd, 4th, and 5th reels simultaneously, awarding you prices of up to 50 times your wager as well as free spins. Appearing in the base game, the feature can even award you with the Wheel of Fortune bonus game.

The Wheel of Fortune is activated while the Random Awards feature is playing out, and it appears with a large bonus wheel that rewards up to 10 times and 1,000 times your wager. This can be retriggered, with chances of winning up to 1,458 times your wager – being the highest payout here.

Zeus depicts the scatter symbol, 5 of which will activate the free spins feature. With 5 activating the feature, you get 8 free spins (3 casual free spins and 1 extra for each of the 5 symbols). During the free spins, the Random Awards appear on all the 5 reels, awarding you with up to 36 free spins when combining with the Zeus scatters.

You can activate any or all of the above bonus games and win big on Easy Slots! 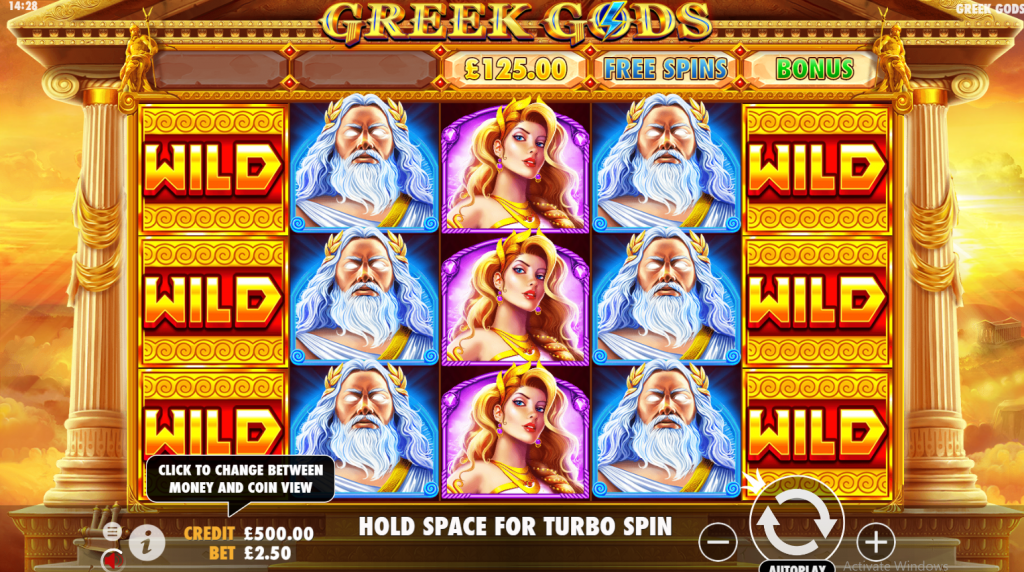 Greek Gods is one of the best slots you can find in terms of solid graphics with a wonderful theme. In view of this, you can try out this game, as well as our other amazing casino games, like the Golden Beauty slot, and record as many payouts as possible on Easy Slots now!