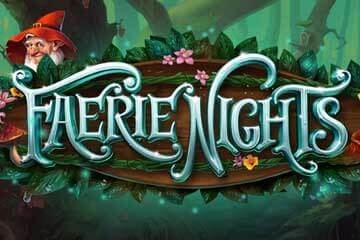 Faerie Nights is a slot game from the developer 1X2 Gaming which offers players five reels, three rows and 20 fixed paylines of entertainment to players as they play the best slot sites games. Set in a gloomy, enchanted forest, the game’s theme is based on mysteries and magic.

If you enjoy movies or stories which make use of witches, wizards, fairies and gnomes, you will find plenty to like in this game. Find out more by reading this review!

The reels of this game are framed by a gloomy trees, the limbs of which twist through a green forest. Mushrooms and mysterious looking plants grow among the roots of the trees. Twinkling bells and mysterious flute sounds contribute to the game’s soundtrack, which helps to create an immersive atmosphere for players. If you enjoy playing slots online, you will soon find yourself being drawn into the world of this game.

The game’s wild symbol is the tree man. This character could be the Green Man of European legend and myth. Fans of the works of JRR Tolkien would probably describe him as an ent. He can only appear in the base game, and will expand to fill all spaces on the reel where he appears. He will replace all standard symbols to create winning combinations. The game’s scatter symbol is the fairy in the red dress.

The game’s free spins feature is triggered when three, four or five of the scatter symbols land anywhere in view. You will receive seven, nine or 11 free spins depending on the number of scatters. The screen darkens and two new symbols, the wisp and the blue fairy, come into play to offer you more chances to win prizes.

1X2 Games is a British games developer which is based on the English south coast, in the city of Brighton. That part of the country is sometimes known as ‘Silicon Beach’, such is the concentration of tech companies in that particular part of Sussex. The company was established in 2002, with the aim of taking advantage of the growth of online gaming.

As well as online fruit machines, they also work in other gaming and casino related spheres. Virtual sports, online casino games such as blackjack and roulette, instant win scratchcards and bingo are all areas where they produce games. 1X2 now has a catalogue of over 30 games for players to enjoy, and was nominated for the Virtual Sports Supplier Award in April 2019.

Other best slots games in the 1X2 catalogue include:

Find more games by this developer and other casino bonuses here. Why not join our mobile casino pay with phone credit now, to enjoy this best-rated slots online and many more with our free spins rewards!

Faerie Nights is a beautiful looking game which offers sharp gameplay and an immersive atmosphere. The graphics are outstanding, with the background to the reels looking beautiful.

The symbols on the reels are superbly rendered too, while the sound effects certainly draw you into the world of magic and mystery in which the game is set. There is plenty of opportunity to win prizes too. Look out for Faerie Nights in your favourite online UK casino! Shamans Dream is another top slot at Easy.