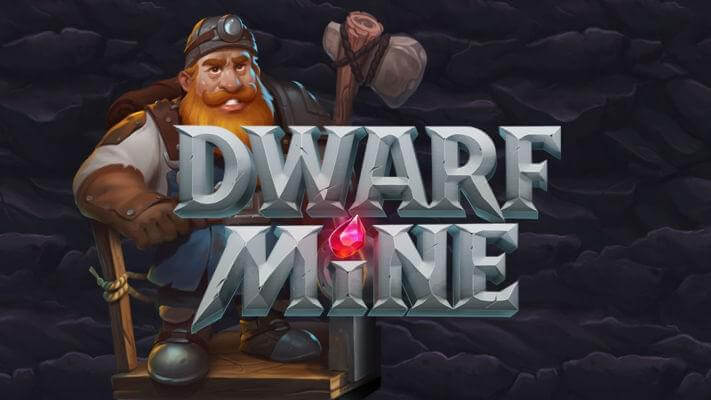 Dwarf Mine is a slot game from the developer Yggdrasil Gaming. It offers five reels, four rows and 1024 paylines of entertainment to players, and should be a fun game for anyone who enjoys playing slots but is also a fan of fantasy fiction and films like The Lord of the Rings. The main character is a red-bearded dwarf who resembles the characters you find in The Hobbit. Play this best slot sites game right away!

The introduction to the game sees one of our diminutive, bearded mining friends head off into a mine shaft to start a shift digging out gems. It looks good and offers an immersive introduction to the game. Once the action starts, the reels are presented on what looks like a handcrafted wooden frame, which is crisply rendered and seems to function as some kind of rock crusher. The dwarf of the introduction stands by the reels, grinning and gesturing as he reacts to your spins.

The higher value symbols on the reels are the red, blue, yellow and green crystals, and you will also see some mining and objects, like the helmet, the spade, the lantern and pickaxe. Wooden playing card suits are used as the game’s lower value symbols. There is no wild symbol in this game, but the drill symbol is well worth looking out for. This symbol triggers two of the game’s bonus features.

One of the game’s bonus features is the expanding reels/free spins feature. The bonus symbol can appear on reels one, three and five, and will expand the rows to fill up several spaces at once. Once the rows have expanded, you can also collect crystals to pick up more free spins.

Founded in 2013, Yggdrasil Gaming is one of the most respected names in online fruit machines. The company is Swedish, and its CEO is Fredrik Elmqvist, who used to work for Net Entertainment.

The name of the company fits with its Viking heritage, as Yggdrasil is the name of the great tree of Norse mythology, which links nine different planes of existence. The company has picked up many awards for their work, including the International Gaming Awards prize for Innovator of the Year in 2018.

As well as their work in slots games, Yggdrasil also works in spheres like keno and scratch cards, as well as lotteries. The company often adds additional gaming complexity to its slots games, which helps to make them more interesting and appealing to gamers.

Other best slots games from the Yggdrasil range include:

Find other games by Yggdrasil Gaming here at Easy slots.

Dwarf Mine is a very entertaining online casino game, which has some particularly good graphics. While the bonus features are a little limited in scope, they offer plenty of entertainment, as well as the chance to win some big prizes.

A nice touch is provided by the way the dwarf character reacts to your spins. Make sure to look out for Dwarf Mine in your favourite online UK casino! Fancy top slots with bonuses? Check out Shamans Dream!