Think Night of the Living Dead, Zombie Land, Shaun of the Dead or even 28 Days Later and you’ll have a fairly good idea what Dead World is like.  The game is based on Caliber’s comic of the same name so if you know and like the comic you will absolutely love this game.

Set against a dark backdrop with lots of blood spatter; be prepared for horrific images and plenty of blood and guts. Easy always make sure that players only experience the best slot sites titles!

Brighton-based 1x2 Gaming has a huge focus on virtual sports games – they are ‘the inventors of virtual football betting’. But in addition to these games, they also provide a range of slots.

About the Deadworld Slots Game

There are the usual playing cards plus the characters from the DeadWorld comic book. A selection of zombie characters parade across the screen from the comic books – Bikini Girl, The Mummy, The Mexican, Spike and Queasy Rider. There are also zombie-killer characters Pony-Tail, The Veiled Assassin and Tribal. And if you’re lucky and get 3 bonuses on screen at once, you’ll trigger the bonus game, Shoot the Zombies. Click to view the game rules and paytable.

Paybymobile and play this best online slot game today at Easy Slots with our welcome offer!

Clicking Max Bet will automatically raise the number of coins to 5 (it won’t change the value of the coins) but beware that it will also perform one spin.

You can set up to play auto by clicking Autobet, selecting the number of spins you want and then click Autobet again. Or you can spin manually one spin at a time by clicking Spin.

Triggered by 3 or more bonus symbols, this is a shoot-em-up game that online game shooters will love. Two rows of zombies circle around on the screen while you try and shoot them down. You have a finite amount of ammo which you can see to the bottom left of the screen. Once you run out, the game ends. If you strike you can earn coins or more ammo but if you miss you get nothing, so hit as many as you can. 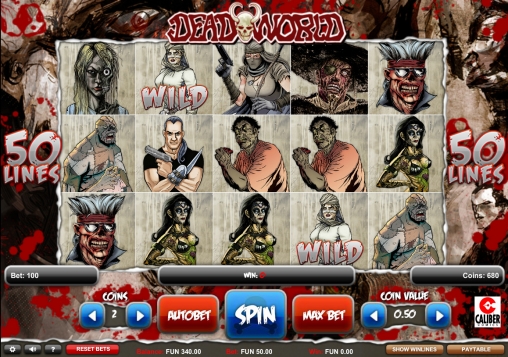 The Verdict on Deadworld Slots

Dead World online slots casino game is a tribute to Caliber’s success with the Dead World comic and a great game for horror fans everywhere.

If you like 1x2 Gaming’s Dead World, you’ll probably also like to play the best rated slot games online to play such as: