Cherry Trio plays on the traditional fruit machines of yesteryear, the ones with the jumping reels, the gold bars, and juicy watermelons. Spin the wheel today on this high-octane, remastered online slot game and match three cherries to earn huge cash rewards and exciting free spin bonuses. If you want to play the best slots UK now then look no further!

About the Developer (iSoftbet)

iSoftbet have a portfolio containing a wide range of original video slot machines. Many of which have been branded to fit a stunning selection of world-renowned TV and Film franchises on top of their equally exciting original instalments. Never one to sleep on a trend, iSoftbet have also converted many of these titles to ensure they are both mobile and tablet friendly – allowing players to take these enthralling games on the go. With over 400 games, each as entertaining as the last, this developer is sure to have something for everyone.

Cherry Trio is a simplistic variant of the traditional 3-reel, 3-row video slot machines. Despite many developers looking for inspiration in the here and now iSoftbet have looked back to the classic fruit machine with modernised graphics and additional bonuses, ensuring this humble game doesn’t get lost amongst the crowd. With 5 paylines players have the chance to walk away with a stunning 1000-coin jackpot – all from a single spin.

To win in Cherry Trio players must first set their coin value of between 1p and £50, this will completely change the winning amounts as well as the amount spent each spin. Since the paylines are all fixed each spin is worth x5 the coin value, x1 for each payline. When players find a winning combination that amount will be given in coins, again the amount of coins won will be multiplied by the pre-set coin value to determine the monetary value. The higher the risk, the higher the reward. 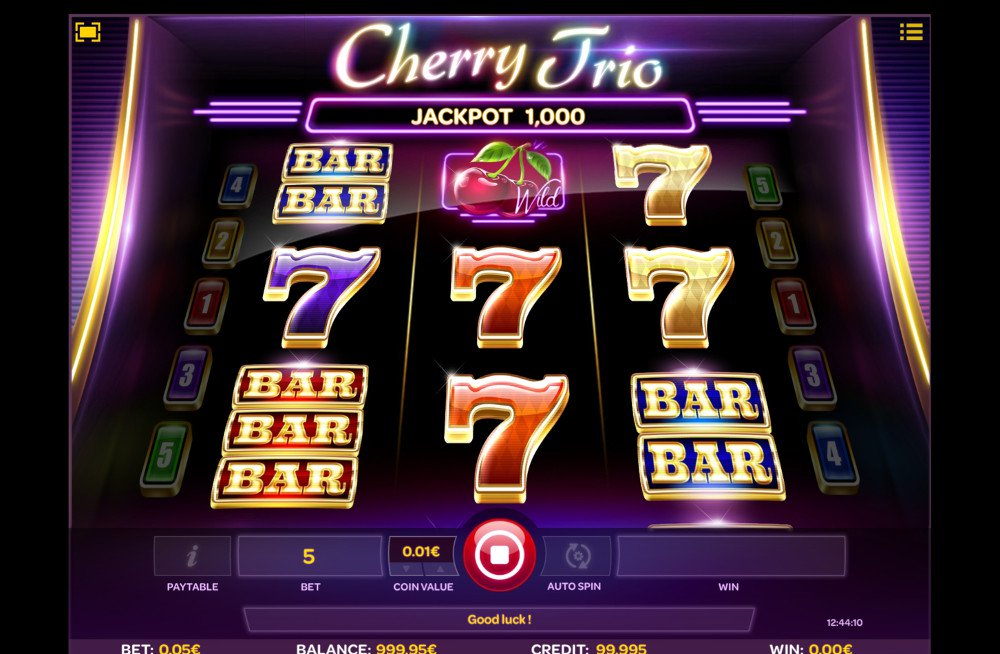 Using classically recognised symbols, players should expect to find 3 varying levels of BAR icons, 3 different valued 7s, diamonds and of course the title Cherry. Each icon is highly rendered and styled within a neon machine – a machine within a machine, helping to mimic the feeling of a busy casino floor.

Going back to basics winning at Cherry Trio is as simple as matching 3 of the same symbol within an active payline. Each base icon has a varying worth from the 3-coin win behind the single BAR to the giant Diamond win of 70-coins (this could convert to anything between 70p and £3500).

As the title may suggest many the Cherry symbol is the star of the show. Its primary purpose is to act as the games Wild symbol, a Wild symbol can be used as a replacement for any other none-bonus symbols, allowing players a greater chance at a winning combination. As well as being Wild, the Cherry symbol is also the highest earning symbol of the base game, matching 3 will win players a staggering 100x their initial bet.

But the magic doesn’t stop there, if players score an entire reel of cherries 2 Free Respins will be triggered instantly. During this the Wild reel will remain in place, still taking on their Wild value. Similarly, 2 full cherry reels will trigger the remaining reel to also respin, in the hopes of the final reel also becoming filled with cherries. Filling the entire board with cherries is the only way to find the Cherry Trio jackpot of 1,000 coins.

Sign up to easyslots.com and claim your free spins!

Cherry Trio brings the idea of fruit machines to modern times, but the 3-reel layout combined with traditional symbolism is where the similarities end. With additional casino bonuses, high resolution graphics and all mighty cherry triggers, the game is much more synonymous to modern day machines. Additionally, allowing players to also adjust their coin wager by such a dramatic range ensures there is a gaming comfortability for every player – whether they are a casual gamer or a seasoned high roller.

A hilarious game that you can try is our Lucky Leprachaun click here.