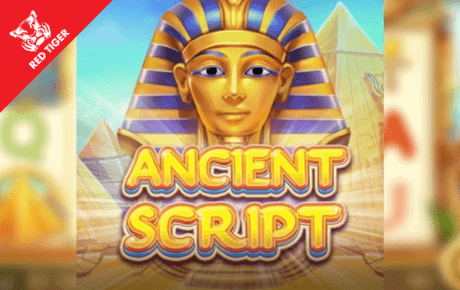 Ancient Script is an online slots game from Red Tiger Gaming. Like many other popular slots games, this title is based around an Ancient Egptian theme. It offers five reels and three rows of entertainment to players, with 10 fixed paylines available. There are a couple of bonus features for you to enjoy. The action takes place in front of suitably mysterious setting, with the reels flanked by palm fronds. Read on to discover more about Ancient Script - one of the best slot sites titles!

The graphics for this game reflect the Ancient Egyptian theme, though there is no storyline that holds the action together here, nor are there recognisable characters that populate the reels. The reels look they might be intended to be a papyrus scroll. The game has a very simple and plain look to it, overall. A glowing blue ball floats on a plinth to the right of the reels, adding to the atmosphere of mysterious magic.

The lower value symbols deployed on the reels are the usual set of numbers and letters that you see in almost every other game, if you are fond of playing slots online. The game's higher value symbols are the golden pyramid, the Eye of Ra, the flail and crook of Anubis, and an Ankh. The Sphinx doubles up as the game’s wild and scatter symbol. It will substitute for all other symbols to create winning combinations.

There are two bonus features in the game: expanding tiles and free spins. The blue ball plays its part in the expanding tiles game, as it transforms into one of the standard symbols to fill additional spaces on the reels when you spin in a win. Three pyramid symbols on the reels gets you 10 free spins. If you don’t like this top slot, then try Mermaid Million Slots instead.

Red Tiger is one of the newer games developers whose names you will see in your typical online casino. The company was established in 2014, and has gone on to develop a strong reputation for the high quality of its output.

Based in the UK, with their offices on the Isle of Man, Red Tiger was formed by a group of gaming experts and entrepreneurs from across Asia and Europe, and it holds licences from the UK Gambling Commission, the Malta Gaming Authority and the Alderney Gambling Control Commission.

Red Tiger’s best slot game are known for featuring innovative concepts like ceiling jackpots, and they are also designed using the HTML5 format, which allows them to be played on devices of varying sizes. All the graphics on Red Tiger games are HD, adding another level of immersion to the experience of playing them.

Other Red Tiger games include:

Ancient Script is not the most mind-blowing slots game that you can find in an online UK casino, but it is still well worth some of your time. Slick gameplay and crisp graphics make it a delight to play, while the bonus features certainly offer decent chances of taking home some big wins. Anyone who enjoys playing fruit machines online will find something to enjoy in Ancient Script.

Play this top slot online and so many other phone bill slots uk here!