Set upon the towering Mount Everest is a sequel to the original Yeti slot, the 90K Yeti Gigablox slots online game. Ready to plunge you right into the heart of the action is the supernatural Yeti, be prepared to summit the peak with all your gear and guts intact.

Will you team up with the Yeti to carve this expedition into a success? Have you got all it takes to surmount the icy cold winds and dropping temperatures to take away the mega prize of 90,000x your bet? Well, then this one’s just for you.

With a relatively low RTP of 95.5% and super high variance, you need every wind in your favour to land you a win. Play 90K Yeti Gigablox on Easy Slots Casino today and witness the best Gigablox slot in play. Also, get a chance to win up to 500 weekly and monthly free spins if you sign up today (Full T&Cs apply).

90K Yeti Gigablox is one of those modern slot games which raises the stake from its original version by increasing the possible winning combinations to an incredible 46,656 ways. The reel is enhanced to a 6 x 6 grid. The bet spread is reasonable, starting from 10p and going up to £10 per spin. However, the thing that makes the game stand out is its max payout of up to 90,000x the stake and is what gives the slot its name. The hit frequency is 22% which means you can expect to win every 5th spin.

Winning combinations get formed when 3 or more matching symbols (just 2 for the Yeti, though) land adjacent to each other on the reel. There’s a Mount Everest Wild, and a Yeti footprint scatters in addition to other features the game provides. The slot also has base game modifiers that help punters keep their winnings flush while they wait for a possible max pay-out to hit.

The gameplay features Gigablox mechanics. Gigablox symbols are colossal symbols that can occupy the entirety of the reel and exist as 2x2, 3x3, 4x4, or 5x5 in addition to 6x6 on the reel. All symbols act as individuals in a Gigablox win.

Those familiar with 9k Yeti Gigablox might feel that most of the game and its controls are the same as the original, but for those unfamiliar, it might be a good idea to go through the controls first to better navigate the game while playing. Enumerated below are the control settings of 90K Yeti Gigablox:

For many punters, the symbols will feel familiar because, again, the follow-up slot borrows most of its elements from the original slot. There are the predictable royal card symbols that form the lowest paying symbols of the lot. They are the Ace, K, Q, J, and 10, which pay from 0.1x to 0.8x the stake for 3 to 6 on a payline.

The other symbols include the climbing gear like the tent, rope, pickaxe, and three human climbers in the form of a male, a female, and a Sherpa. The tent, rope, and pickaxe pay slightly higher than the lower paying symbols and go up to a 1.2x multiplier for 6 on a win line. The Sherpa and climbers will award 0.6x for 3 symbols on a payline and 2x the stake for 6 on a payline.

The Yeti is the highest paying symbol and will award a fantastic 4.8x the stake if you land him on all 6 reels in one turn.

The table below mentions the multiplier value associated with each symbol for 2, 3, 4, 5, or 6 on a payline.

The bonus features in 90K Yeti Gigablox get the game going, but there are 3 reel modifiers too to make the base game more exciting. These modifiers aren’t easy to come by, as one can expect from the super high variance of the slot, but you can expect them every 75 spins on average. They are randomly triggered when the Yeti on the side comes to life.

Some of these base game modifiers might feel familiar for players of the original slot. They are:

The Yeti will destroy all the snow blocks occupying the reels to reveal symbols that will help form winning combinations.

The Yeti blows up a snowstorm to reveal a shuffled reel that will result in winning combinations.

Giga Summon: The Yeti summons the Gigablox symbols to appear on the reels. They may occur as 4x4, 5x5, or 6x6. You can manage to land all symbols other than the Yeti as a 6x6 Gigablox symbol and win up to 18,662x your stake. You can only land the high-paying Yeti as a 5x5 Gigablox symbol, but if you land smaller Yeti symbols on the rest of the reel, you can walk away with the coveted prize of 90,000x the stake!

This feature will remove all snow block symbols and either the Snowstorm or Giga Summon feature is sure to be activated. This free spins feature may be hard to trigger, possible once every 362 spins, but once it does, be sure you’ll be running to the bank with bags full of winnings. 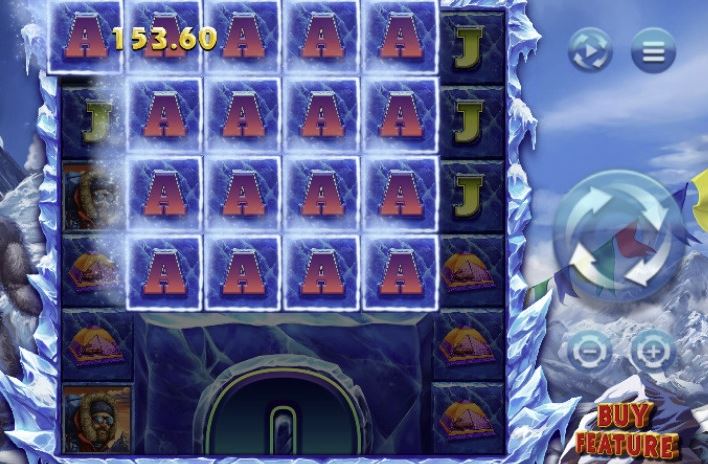 The slot game hosts amazing, crisp, and clear graphics, especially a notch up from its predecessor. Although at first glance, the slots may look the same, 4ThePlayer has certainly reworked the small kinks out of the original, and the result is a seemingly perfect-looking slot. Set among the Himalayas, where no one dares to step foot except those looking to the summit, the slot is a high-risk, high-reward sort of adventure.

The three climbers, including the Sherpa, are looking to conquer the mountain, but are they aware the inimitable and monstrous Yeti calls these mountains his home? The overarching theme is supremely supernatural and adventurous combined into a single package for punters. The overwhelming icy blue will draw your blood cold and question your strength to persevere. Do you have it in you? Let’s find out.

Some other, Yeti themed slots that are popular these days include:

4ThePlayer was founded in 2018 by CEO Andrew Porter and Chris Ash, but their foray into the online casino market is anything but recent. With decades of experience serving various creative roles in the industry under their belt, both set out to form an innovative entertainment and gambling company that felt more current. 9k Yeti was their first venture, one that proved quite fruitful.

They introduced Plus Ways mechanics into their games, raising the stakes but increasing the ways of winning tenfold. Their games have become characteristic of solid maths profiles, engaging gameplay, and fantastic graphics; 90K Yeti Gigablox is proof of that. Other wolf-themed games like the 90K Yeti Gigablox slot available at Easy Slots include:

As is apparent, they tend to have their slots’ names begin with a number.

4ThePlayer has also introduced a Big Reel Portrait Mode feature for all their games, thus enhancing the gaming experience for their punters. As a modern casino company, they aim to meet customers’ demands technologically and with the newest innovations.

Some of the review team had already played 9k Yeti before, and despite its higher RTP of 97%, the team had more fun playing this one with its lower RTP of 95.5%. You may ask why? Well, for most of us, the giant max payout of 90,000x the stake certainly spoke in 90K Yeti Gigablox’s favour. Also, this slot may be the best in terms of ways to win and max payout we’ve ever seen in any Gigablox based slot.

Its super high variance and low RTP of 95.5% might put off many new punters, but this will certainly float the boat for those who like the stakes high. Many seasoned players like a bit of a challenge while gambling, and 90K Yeti Gigablox offers it in truckloads. The bet spread is also amenable to all kinds of punters but if you want to land a chance to win the max payout, make sure you have enough bankroll to support the chase.

The game modifiers and bonuses are also different from the original, especially the Gigablox feature. Let’s look at a few pros and cons of 90KYeti Gigablox, and help you make the right decision to play this game.

You can be sure that despite only a two-year difference between the original and the sequel, the sequel will end up the winner in many people’s books.

For its cool graphics, innovative gameplay, and a massive payout of 90,000x the stake, our review team gives this amazing slot a very well deserved 8.5/10.

Can I play 90K Yeti Gigablox free at Easy Slots?

Easy Slots Casino welcomes all its new players with up to a £1,000 deposit bonus / up to 1000% match bonus, and you can certainly avail this to play 90K Yeti Gigablox on our site. This welcome offer applies to all slot games except progressive jackpots (Full T&Cs apply). The Demo version for the slot is available to play online.

90K Yeti Gigablox is compatible with all desktops, smartphones, and tablet devices. However, one feature present in all 4ThePlayer slots that gives them a leg up from usual games is their Big Reel Portrait Mode feature. This feature allows the reel to flip horizontally on mobile screens so that it occupies 60% of the screen instead of the usual 20%, enhancing the gaming experience by miles. Play it on our mobile optimised website to get more bang for your buck.

What is the RTP of 90K Yeti Gigablox?

What is the volatility rating of 90K Yeti Gigablox?

The 90K Yeti Gigablox has a super high variance grade.

How to win at 90K Yeti Gigablox?

You can win the max payout of 90,000x the stake by landing a 6x6 Yeti Gigablox symbol and a smaller Yeti symbol on the grid simultaneously.

Can I win free spins at 90K Yeti Gigablox?

90K Yeti Gigablox offers a free spins feature for its punters for a chance to win up to 36 free spins in one go.

What is the jackpot of 90K Yeti Gigablox?

The maximum payout potential of 90K Yeti Gigablox is a gigantic 90,000x the total bet.

Easy Slots Casino hosts 90K Yeti Gigablox and 600 other amazing slots, casino games, and instant games on its website, from over 25 software providers. One of the instant games we can recommend is Shave the Beard Scratch, which can win you an incredible 50,000x your stake.

Experience 90K Yeti Gigablox on Easy Slots Casino today and get access to some insane promotions including up to 20,000 loyalty-free spins and Happy Hours free spins now (Full T&Cs apply).

*All values (Bet Levels, Maximum Win, etc.) mentioned in relation to this slot game are subject to change at any time.