If you have had a bit of bad luck recently, why not take a visit to WMS’s 88 Fortunes, the luckiest online casino slot game on the internet! So, listen to the sound of that bong, it is time a feast on the cuisine of Eastern-Asian gold! 88 Fortunes use a 5 reel, 243 ways-to-win system.

This game has a stunning gold and red design which is sure to weigh down your pockets, once you get your grubby little hands on that Eastern-Asian gold tender! So bring some braces or at least a belt! There are lots of exciting features including four jackpots and extremely fun WILD feature modes from this best online slots 2020!

About the Online Casino Developer

WMS has a reputation for creating incredible games which are highly innovative, engaging, fun and cutting-edge! They are a developer who wants every gamers’ experience to be one-of-a-kind. They try and achieve this by incorporating modern features into their best online UK free slot games, by supplying their players with premium gameplay.

Some of their modern features include high-definition displays, extreme attention to detail, and excellent lighting packages. WMS has an array of iconic titles including The Wizard of Oz, Willy Wonka and the Chocolate Factory, and Jackpot Party. If you enjoyed 88 Fortunes, you may also like these titles:

As you can see from the suggested games, this is a company which influenced heavily by Eastern-Asian cultures. This is not surprising, as it is very common for games developers to look to the East, which has created some of the most iconic titles in gaming history. Companies such as Nintendo, Namco and Konami, are just three titans of the gaming industry!

Pay by mobile casino is the best options when it comes to depositing and playing this game.

About the Online Slot Game

88 Fortunes is a 5 reel, 243 ways to win slot with a classic oriental theme. Luckily, it is another amazing game available to play here at easyslots.com. The design is absolutely stunning. The colour arrangement shows the rich combination of colours red and gold.

This gives the game a traditional Eastern-Asian aesthetic, which looks absolutely magnificent. Behind the dark red reels, you'll see a simple deep red background. The reason the colour red has been used so much throughout the game is that in Eastern Asian countries, like China, red represents good luck. You'll also notice a huge pot of golden coins above the reels, doesn’t it just make you want to grab it and keep it for yourself?

Within the gameplay, symbols include suits from a deck of cards: J, Q, K and A, as well as the number 10. Additionally, there are golden birds, golden turtles, stacked gold ingots, a golden ship and Chinese coins. There is so much gold that our desktops and mobile devices have been too heavy to carry! 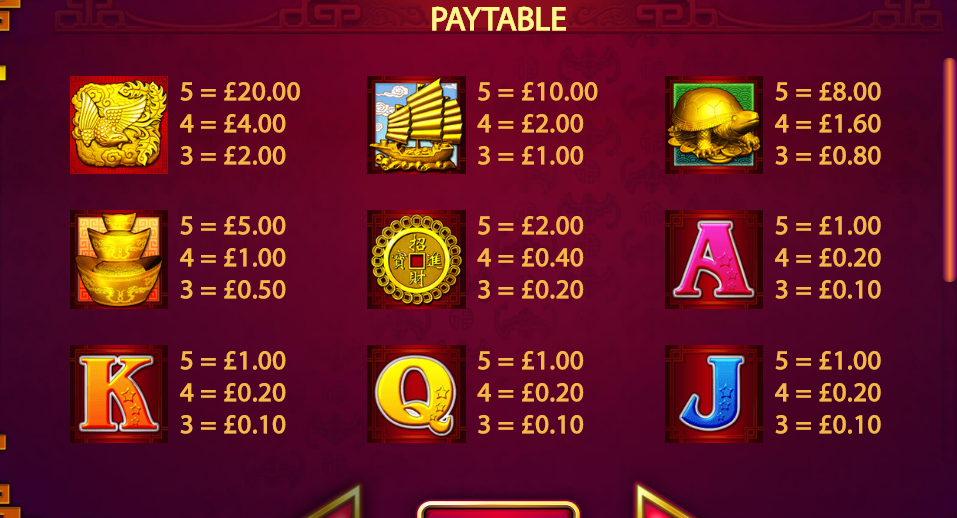 Fu Bat Wilds - The wild in this slot is the fu bat wild. This symbol can replace all other symbols, apart from the scatter, to create winning combinations. The fu bat can only appear on reels 2, 3 and 4.

Fu Bat Jackpot Feature - Every time a fu bat appears, you have access to the jackpot feature. If you are eligible to more than one jackpot, then you will be whisked away to another screen. Here you will be shown 12 shiny golden coins. Next, all you have to do is simply click any coin that you think maybe lucky to reveal a prize. If you manage to match 3 symbols, then you will receive a great golden cash reward, however, if not match is made, then the feature will end.

Fu Bat symbols represent good luck in Chinese culture. That is the kind of research the creators of this game have put into producing an authentic, Eastern-Asian gambling experience!

Free Games Feature - Landing 3, 4 or 5 gong symbols on the neighbouring reels will grant you 10 free games! How crazy is that? However, remember that playing card suit icons are not in play during this feature. The fu bat jackpot can be unlocked during the free games feature allowing you to win even bigger and better prizes. This is a feature which will end when no more free games are available.

The Verdict on 88 Fortunes

So, bow to the new master of online casino slot games! The list of reasons you should play this particular game is longer than the Wall of China. There are as many reasons to try out this amazing game as there are people in China! This game is quickly taking over the iGaming world by storm! If you enjoy beautiful visuals and sounds this is the perfect online casino slot game for you!

It's rich in design, colour, theme, and features. It's a luxurious slot with lots of golden prizes up for grabs. The fu bat jackpot is perhaps the best feature as matching 3 symbols from the coins will give you a fantastic win. And, this can also be triggered in the free games feature.

If you don’t fancy this one, check out Ali Baba slot game instead.